HD cameras are commonplace. Everyone offers 1080p. The big question now is how much better is 5MP or 10MP? Is a 10MP camera 5 times better than 1080p as pixel count proponents claim?

In this report, we share test results of a head to head shootout between 1080p, 5MP and 10MP cameras. For this test, we bought 3 compact box cameras from Arecont (3MP AV3116, 5MP AV5115, and 10MP AV10115), known for both their unrealistic claims and high resolution offerings. This allowed us to eliminate any variances across manufacturers and focus simply on the advantages and disadvantages of varying resolution

For Low Light (1lx and below)

In most cases, especially where low light or WDR performance are a concern, 1080p is still a better choice than higher resolutions. 5 and 10 MP cameras, while delivering higher pixels per foot, suffer from poorer performance in these scenes.

In evenly lit scenes, such as well lit interior areas or lit parking lots, 5 and 10 MP resolution offers advantages across wide fields of view (20'+). At these ranges, 1080p is much less likely to deliver necessary details.

In WDR scenes, true WDR cameras should be used. While the 10MP model in this test performed better than its 5MP counterpart, both were outperformed by the true multi-exposure 1080p model. However, since true WDR is generally not available in cameras above 3MP, in large areas such as multi-door loading docks, 10MP may be beneficial due to its better WDR performance.

We made the following comparisons outdoors on an overcast day, at three light levels. Users can download a 13MB zip file of these scenes.

At a horizontal field of view of ~20', the 5 and 10 MP cameras do not deliver more practical details than the 1080p camera. Our subject is recognizable in all three, with the chart legible to line 5/6 in even the 1080p camera.

At a 50' HVOF, however, differences become apparent. The 5 and 10 MP cameras provide much more detailed of our subject, with the chart remaining legible than using 1080p.

Finally, widening the field of view to 100', 10MP offers the best performance, with better details of our subject, and the first and second lines of the chart discernable.

In this scene, outdoor lighting produced between 3-8 lux, depending on distance. At a 20' horizontal FOV, the 5MP edges out the 1080p camera in details of the subject and chart. The WDR 1080p camera produced some noise and artifacting at this light level, obscuring some details. The 10MP model clearly shows the test chart, but no details of the subject. All are outperformed by a 720p low light optimized camera, shown for reference.

At a 50' HFOV, the 5MP camera still shows more detail of the test chart, but our subject is nearly impossible to see. The 1080p camera shows both subject and chart, though without any details, while the 10MP model is barely able to see the test chart.

Finally, at our widest FOV, 100', the 1080p model and 720p low light camera still provide detection of our subject and chart. The 5MP model minimally shows images of the test chart, while the 10MP camera is nearly black, with high levels of noise.

Finally, in a truly dark scene, the 1080p camera is able to detect our test chart, but provides no details. Both 5 and 10MP cameras were essentially black, with no usable image. 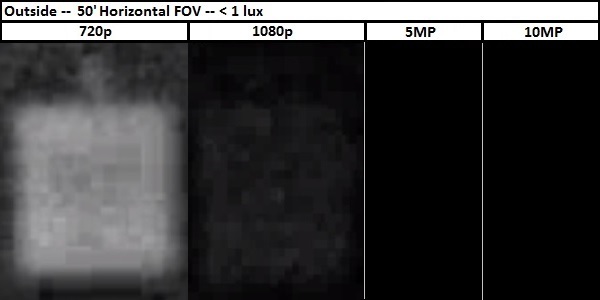 And finally, using a 100' HFOV, none of the cameras are able to produce usable video, with even the 720p low light camera only minimally detecting the chart.

To test WDR performance, we set up our cameras in a warehouse with a wide open overhead door, creating a 20x variance in lux levels, seen in this image: 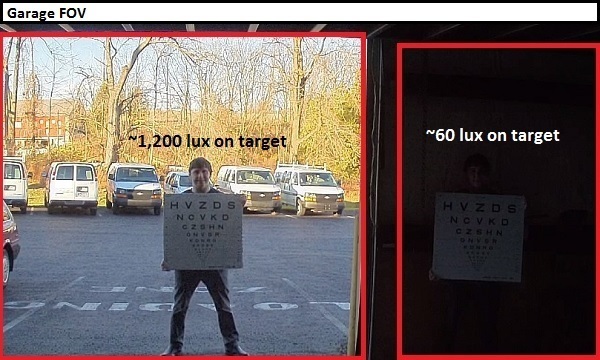 The 1080p true WDR camera was the clear best performer in this scene. However, the 10MP model, due to its higher resolution, performed well in the strong backlighting of the overhead door, as well. Neither 5 nor 10MP models provided details in the dark 60lx area next to the door. 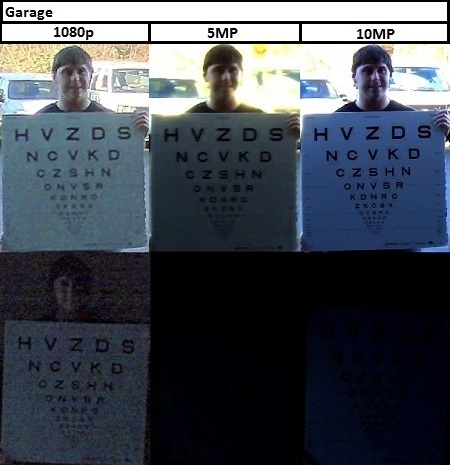 Interior performance of 5 and 10 MP resolution can be seen in this hallway shot from our Camera Selection Guide. In this case, 5MP outperformed both 1080p and 10MP, being the best balance between resolution and light handling in this scene, about 45 lux on target. 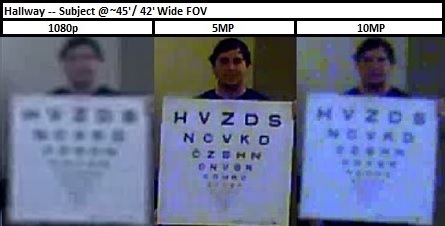 All cameras were left at default settings for this test, with the exception of exposure, which was normalized at 33ms, and binning, which was turned off.