Most IP camera models now support on-board storage. Even more promising, on-board storage has the potential to eliminate NVRs / centralized VMSes as the recordings can be stored inside the camera itself. Plus, SD card storage continues to grow with many 128GB cards available.

However, how often is on-board storage being used?

In this note, we reveal unique IPVM integrator statistics that show usage rates and the key reasons for and against integrators using on-board storage.

Overall, usage is quite low, at ~7%, though just a few years ago, surely it was at or near zero: 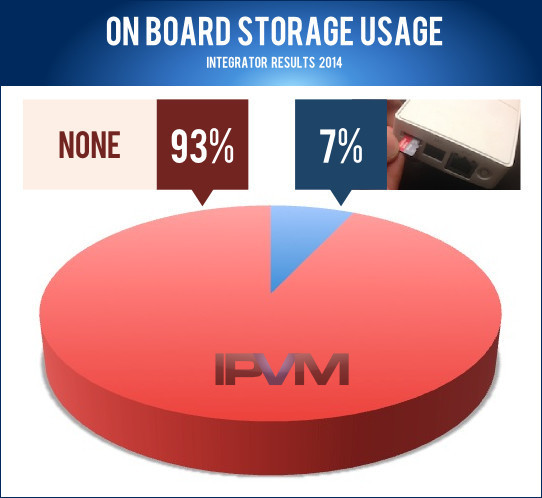 The 'good news' then is that some integrators are certainly using on-board storage sometimes and that use is on the upswing.

Indeed, as our usage breakdown shows, a non-trivial number of integrators are using on-board storage on more than 10% of their cameras. 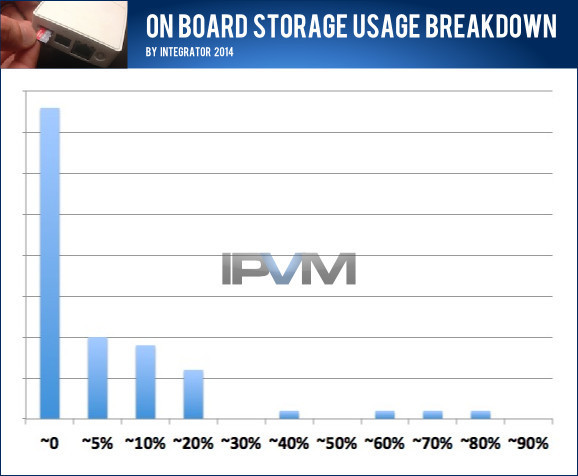 Far and away, the #1 reason / use case integrators gave for on-board storage was redundancy:

A secondary, but even more niche case, was for covert applications:

However, only a few integrators talked positively about using on-board storage to eliminate VMSes, and even those, only used it very rarely.

Integrators have been trying to use on-board storage, including as a VMS replacement, but the #1 problem cited has been reliability:

It is impressive that Axis has single handedly damaged the reputation of on-board storage though it is not surprising, given the outpouring of problems expressed here: Axis Edge Storage And Camera Companion Is Unstable. Unfortunately, there is still no clear response / solution from Axis.

Though a few of the larger VMSes support on-board storage, even the ones that do are typically limited to a few camera manufacturers (most often, Axis). An emerging ONVIF Profile (G) aims to standardize this (i.e., access recordings from devices) but practical support is quite limited.

One integrator having success with Axis Camera Companion noted that "The type of SD card is critical. This is one area you do not want to cheap out on. Cheap SD cards will fail rather quickly. The AXIS Camera Companion software has served us nicely." Related, see our discussion, Are UHS Speeds Needed For SD Cards Used In Surveillance?

Finally, a few integrators mentioned, in passing, about price or cost concerns. Clearly, this is less of a factor for users seeking redundancy, as such systems usually spend heavy on surveillance and are willing to pay for the incremental $50 to $100 cost of an SD card as well as having enterprise VMS software that supports this. However, for the low end, eliminating VMS servers with on-board storage is increasingly less attractive as the Chinese super inexpensive kits proliferate for that end of the market.