IPVM bought an SNF-7010 and tested it head to head against Axis, Brickcom and Vivotek panoramic cameras (from our previous panoramic test series - see 1, 2, 3).

The Samsung SNF-7010 sells for ~$360 USD online, making it one of the lowest priced panoramic cameras we have tested, and priced ~40% lower than other cameras in this test, which all retail for ~$600 online.

The SNF-7010 has the strongest WDR performance of any panoramic camera we have tested, making it the best choice for areas with varying lighting conditions, such as lobbies and loading docks, where panoramic cameras have historically performed poorly. However, if low light image quality is the main concern, users would likely be better served by other options, such as Brickcom and Axis.

Readers may also reference our test of the ACTi E96, another fisheye panoramic in the SNF-7010's price range (~$360 online). The ACTi E96's performance was below that of the Axis, Brickcom, and Vivotek cameras in this test in all light levels tested.

In this video, we review the physical construction of the SNF-7010:

The web interface of the SNF-7010 is nearly identical to other cameras in the WiseNet III series, with the exception of true day/night options, as this camera has no mechanical cut filter (software day/night only). No specific options are included affecting panoramic operation. We've included the screencast from our WiseNet III shootout here:

In this screencast we review use of the Samsung Fisheye Milestone plugin:

We shot the cameras in this test in a typical warehouse scene on a sunny day, seen in this image, to test WDR performance: 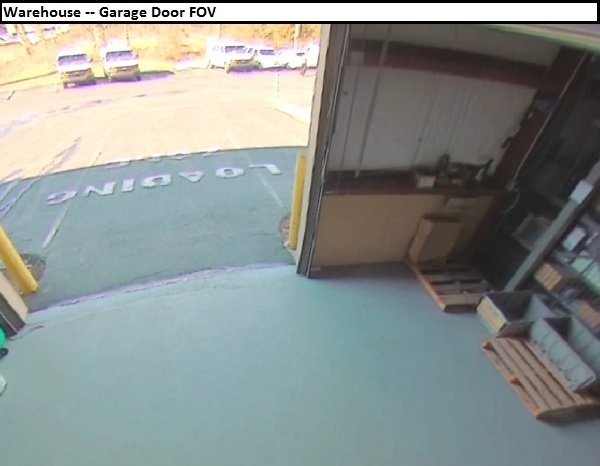 The SNF-7010 had the strongest WDR performance of any panoramic camera we have tested, with the ability to clearly see object outside, past the brightly lit overhead door in our warehouse scene. This comparison shows WDR on and off to give an idea of the full effect: 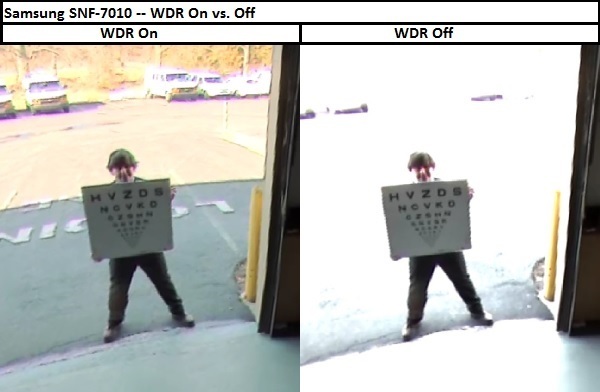 Compared to other cameras in this scene, the SNF-7010 displays far more detail beyond the door, with others simply washed out. However, details of our test chart are reduced, with the Axis M3007 and Brickcom MD-300Np able to read lines 4/5, while Samsung is difficult to discern past line 3. 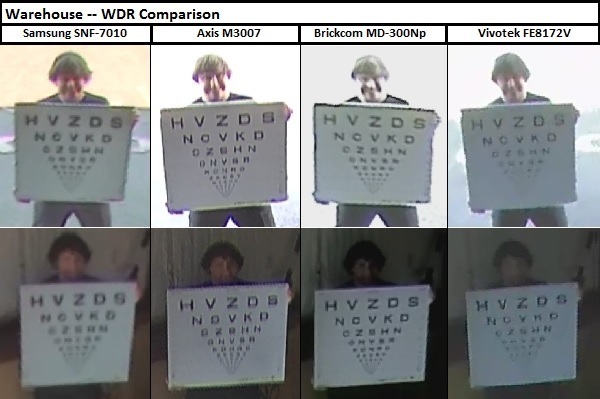 In low light, about 2 lux, the SNF-7010's performance is close to other cameras in details of both subject and chart.

At ~18', the SNF-7010 is able to more easily discern letters of the test chart than other cameras, though subject details are approximately the same.

Full light performance of the SNF-7010 is average compared to other cameras, with slight blur obscuring some details, even after refocusing the camera. At 6', performance is about equal to the MD-300Np and FE8172V, while the M3007 is clearly able to read more lines of our test chart, and shows better details of the subject's face.

At 12', the test chart is moderately less legible than in the Axis M3007. Details are about equal to Brickcom and Vivotek at this range.

Finally, at 18', performance lags behind Axis and Vivotek, but is about equal to Brickcom.

The following camera firmware was used for this test:

The following VMS and client versions were used: