The #1 missing feature for Google / Nest / Dropcam has been no outdoor model, inspiring a slew of DIY and unauthorized commercial add-on housings.

Seeing this gap, Samsung is aiming to win some of these users over with a new outdoor model of their 1080p SmartCam.

We bought a Samsung 'SmartCam' outdoor model to see how it works. Below is one of the many videos we recorded evaluating the unit:

Inside, we dig deep into the new Samsung model comparing it to the Dropcam Pro, specifically evaluating:

Setup: Initial setup is straightforward, and allows users the option of adding cameras either via the cloud interface or through a smartphone, either wired or wirelessly. Cameras are automatically detected using both methods, with no issues in detection or addition during our testing.

Usability: Samsung has not remedied usability issues found in their indoor SmartCam, including lack of user feedback during search/playback, and requiring users to manually eject the SD card to export files. Live view latency is low, less than a second, though initial connection setup (before the camera begins streaming) took 5+ seconds in our tests.

Installation issues: The cable connecting the camera and base unit must be run through exterior walls or windowsills to install, as it is too thick to run through closed windows or doors, which a flat cable may allow. Further, its 25' length allows the base to be mounted for better wireless performance or nearer wall outlets, but the cable is not field serviceable, so consumers must find space to hide any slack.

Aesthetics: The camera unit itself is compact, due to its separate base unit, smaller than typical compact bullet cameras. This may make it attractive to especially aesthetic-conscious end users.

The SNH-E6550BN offers small size, good image quality in full and low light, easy setup, and free cloud access with local SD recording, making it attractive in outdoor applications where Dropcam has no option, without add-on housings, none of which are authorized or recommended (and void warranty coverage).

However, installation may be difficult for all but DIY-savvy consumers, due to the thick cable connecting camera and base units, which must be installed intact, requiring users to make a wall penetration large enough to fit the cable's modular plug through. These consumers may also find the lack of video export confusing, since  the SD card must be physical removed and viewed with a computer.

We take a look at the physical construction of the SNH-E6440BN in this brief video. Key notes include:

Due to the thickness of the cable between the base and camera units, users cannot simply run it through a window or door and close it in most cases. Seen below, attempting to place the camera outside, the window simply cannot shut without damaging the cable, requiring it to be drilled through the window frame or outside wall.

Here we demonstrate out of the box wireless setup using a smartphone and Samsung SmartCam app (which is recommended in the user guide):

First, we placed the camera near the front door of the house, viewing the front porch and driveway, seen here: 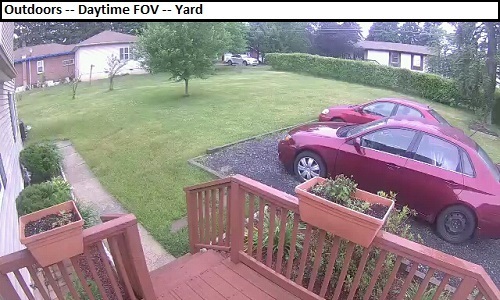 In this scene at night, the camera’s IR illuminator covers the whole FOV, though is notably brighter in the center. Our subject is easily visible at ~40' feet in the yard: 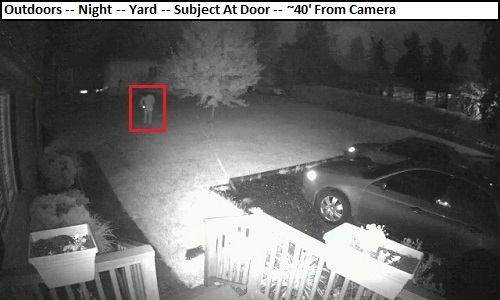 However, with our subject closer to the camera, features on our subject become partially washed out, but can still make out enough details for recognition: 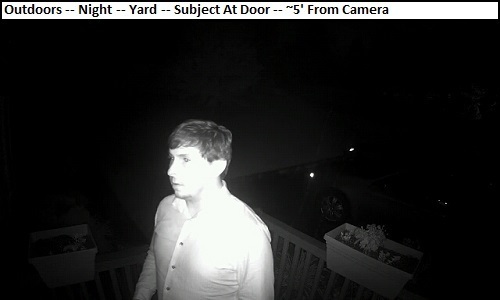 Next, with the camera monitoring a backyard patio and shed. Below is the FOV: 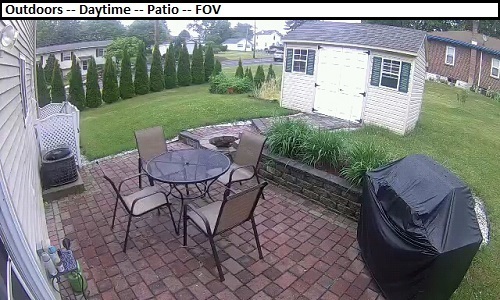 At night, we can see our subject around the corner of the shed, ~35' from the camera: 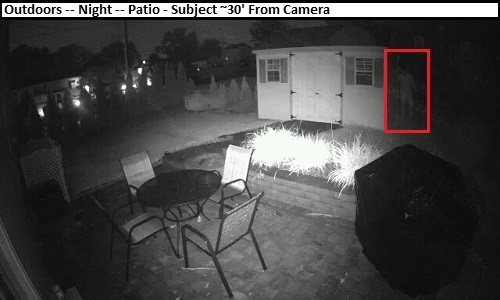 As our subject moves further away from the camera (~45'), ir illumination is weak, but we can still detect that a person is present: 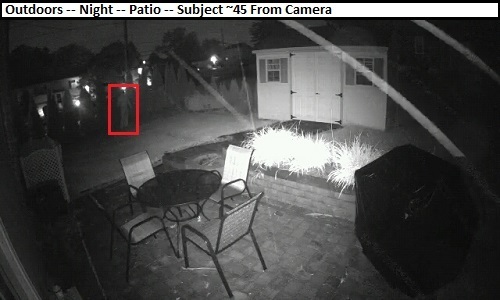 Inside, we compare the outdoor Samsung SmartCam to the Dropcam Pro. The SmartCam was shot in full resolution 1080p while the Dropcam Pro was 720p. The FOV's of both cameras can be seen in the image below.

In full light across a ~22' HFOV, we can see that the 1080p Samsung camera is able to read 1-2 lines further down the test chart, but reading text this small is unlikely to be required in the residential applications these cameras are intended for. 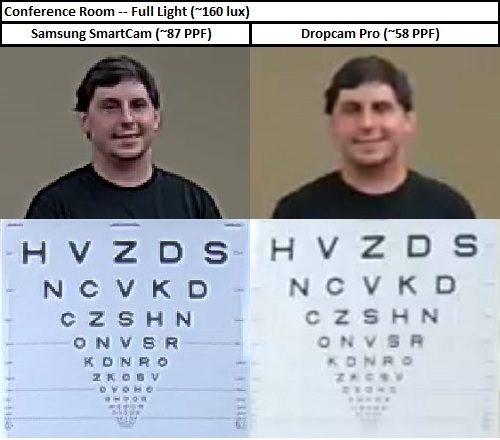 In the dark (~0.1 lux) with IR on, overexposure or underexposure is quickly changed with the Samsung SNH-E6440BN, as demonstrated below. This is key in outdoor applications where you may have a lot of movement outside of a residential home and need the camera to adjust quickly.

Compared to Dropcam, the outdoor SmartCam's IR is much stronger, and fully illuminates our subjects face, but also overexposes line 6 and below on the test chart. Again, seeing these details may not be a practical issue for residential applications. 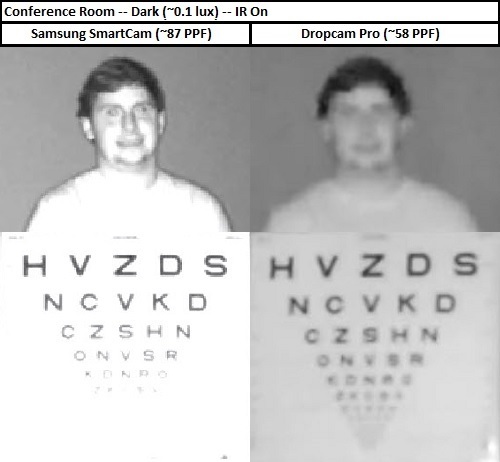 This section briefly recaps the Samsung SmartCam cloud interface, for live and playback use, as well as issues in exporting video. Users looking for full details should see our original Samsung SmartCam test.

Playback from the SD card is simple, but nothing has changed since we first looked at SD card functionality with the Samsung SmartCam SNH-P6410BN. Users still choose the date and recording type (motion, manual, alarm, or continuous) and hitting search, with video populating a timeline. However, lack of feedback on the user interface to indicate loading makes it seem as if the UI may be frozen and may be confusing for users.

Users are still required to physically remove the SD card to view recordings on the SD card. No export options are available, either through a smartphone or computer.

Remote Network Access for Video Surveillance Guide on Jul 27, 2020
Remotely accessing surveillance systems is key in 2022, with more and more...
Directory Of Consumer Security Cameras on Aug 16, 2017
The consumer camera segment continues to grow, with new startups and models...
Comments (5) : Subscribers only. Login. or Join.