Samsung has never been a serious player in IP cameras, despite their success in other markets. Now, Samsung is pushing their Wisenet III [link no longer available] release as their breakthrough offering.

We did low light, WDR and bright light comparisons, like the one below: 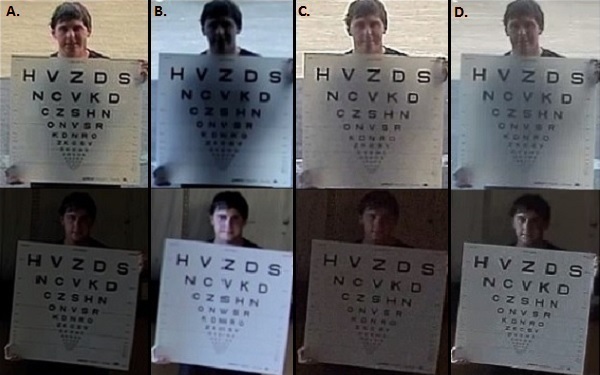 The following is the cameras tested and their online pricing:

Given the SNB-5004's excellent low light performance, combined with a much lower price than competitive models, it is a competitive choice for these applications, though lagging behind other models in WDR. For those seeking a 1080p WDR camera, the SNB-6004 is a good choice, as well, though its low light performance lags. Users of both should beware of blur created by SSNR and carefully weigh the tradeoffs between image quality and bandwidth when reducing or turning off this feature.

This video reviews the physical construction of the SNB series box cameras:

In this screencast we review the Samsung web interface and key configuration settings. Key points include:

Samsung's digital noise reduction, called SSNR, created motion blur on moving objects, as seen in the image comparison below. This setting is turned on by default. Users may download clips of this scene with SSNR On and Off to view this effect for themselves. 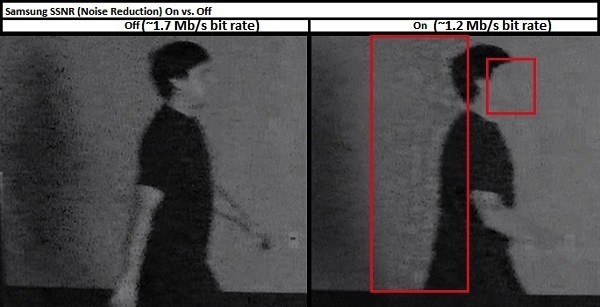 Turning SSNR off resulted in about a 500 Kbps increase in bandwidth (from ~1.2 Mb/s to ~1.7 Mb/s) in this scene for the SNB-5004, about a 40% increase. This tradeoff between image quality (reduced blur) and bandwidth must be carefully considered when using the SNB-5004/6004 in low light scenes.

In full light, ~160 lux, both Samsung cameras perform without issue. Colors are fairly true, with a faint bluish tint visible on the chart, but not impacting recognition. 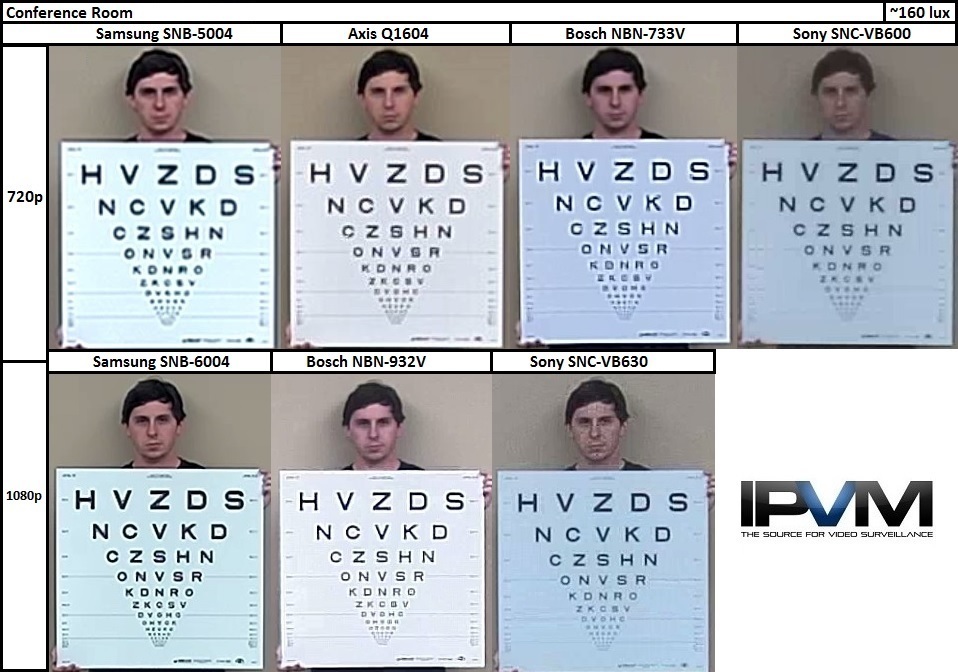 With all lights off, below 1 lux, the SNB-5004 outperforms all other cameras in our test. Our test chart can be read to line 3/4, while other cameras barely resolve line 2. The SNB-6004 does not fair as well, with a darker image and more noise, which nearly obscures even the first line of the chart. Only the Bosch NBN-932V provides useful images of our subject's face among the 1080p cameras. In these scenes, shutter speed was normalized to 1/30s across all cameras, and the Samsung cameras' SSNR noise reduction was turned off. 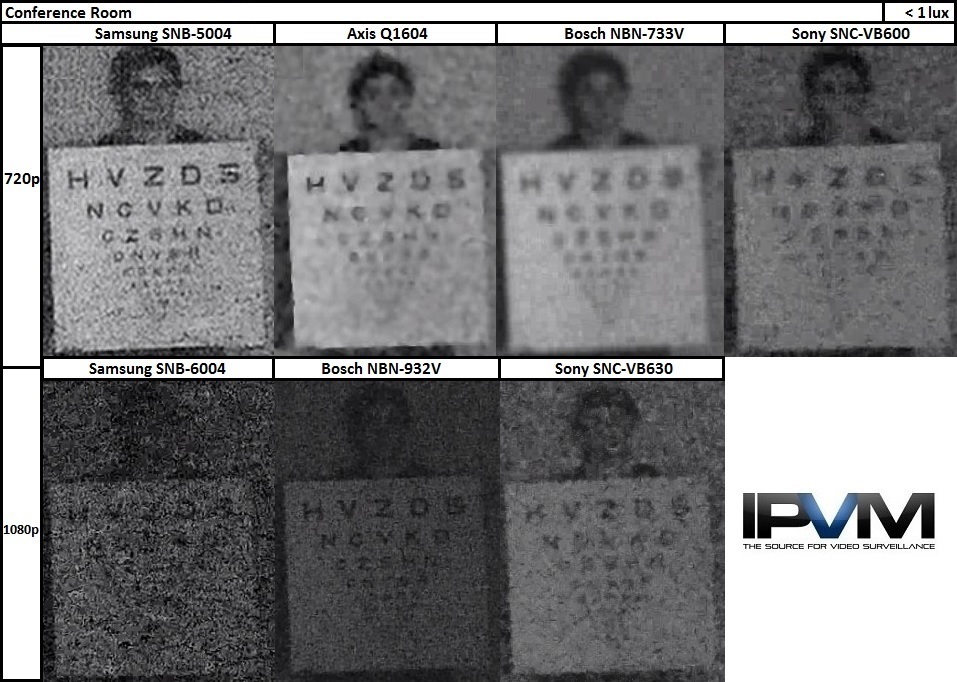 We set up the cameras in a garage with the overhead door rolled up to test WDR. Included is an FOV image displaying the scene. 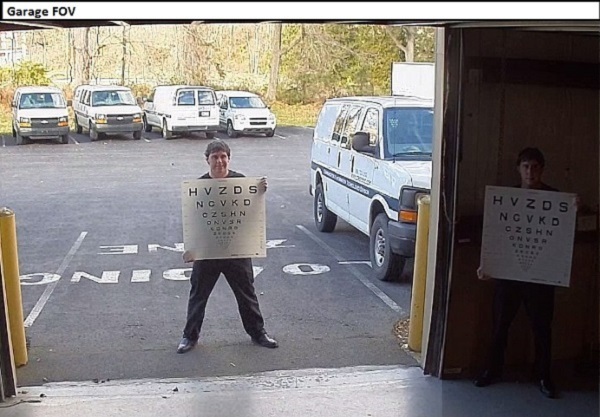 With our subject against a brightly lit open overhead door, both Samsung cameras perform well. The SNB-5004 is on par with the Bosch 733 and Sony VB600, and outperforms the Axis Q1604. The SNB-6004 lags slightly behind the Bosch 932 and Sony VB630, with details of our subject's face slightly more difficult to discern. 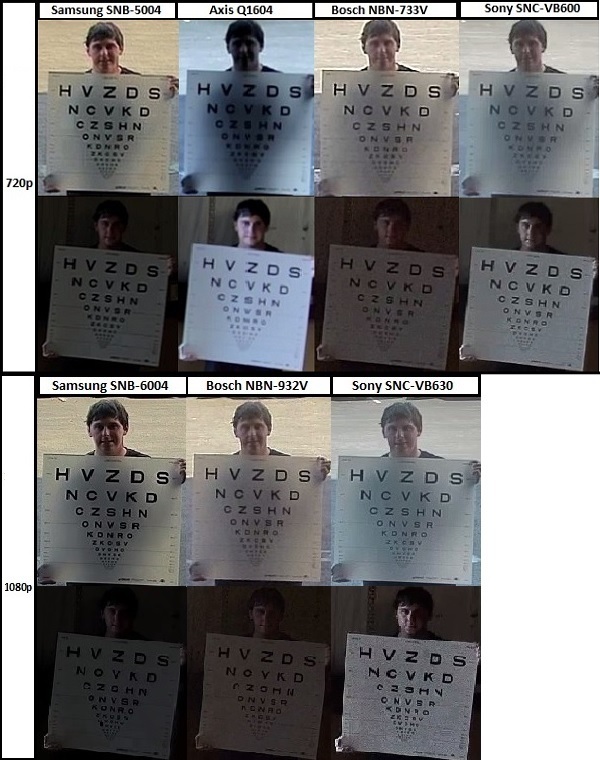 In the dark area beside the overhead door, both Samsung cameras are the lowest performers at their respective resolutions. Details of our subject's face are much more difficult to make out, though the chart remains legible.

Both the SNB-5004 and SNB-6004 include digital image stabilization as a standard feature, which is not commonly found in IP cameras. When this is turned on, the camera crops some of the edges of the image in order to compensate for movement, reducing effective resolution by ~20%.

We tested this feature by shaking and striking the camera's tripod, seen in the clip below. While it did not completely eliminate movement, the feature was a marked improvement over cameras which did not include image stabilization.

The SNB-5004 had some of the lowest bandwidth consumption in both full light and dark scenes, as seen in the chart below. These measurements were taken using 720p resolution, 30 FPS, with SSNR turned on. Using Samsung's default compression setting ("10") resulted in quantization of 27 in full light, increasing to 32 in low light. This is in line with other cameras in the test which averaged about 30 on the quantization scale.

All cameras were left at default settings for this test, with the exception of shutter speed, which was normalized at 1/30s.

IP Camera Specification / RFP Guide 2017 on Aug 14, 2017
RFPs are hard. Do them 'right' and it takes a lot of knowledge and time. Do...
WDR Shootout 2017: Low vs High Cost Cameras on Jan 24, 2017
Multi-exposure WDR was once only available in expensive cameras but in the...
Arecont Stellar Camera Tested on May 25, 2016
Arecont offers:  STELLAR (Spatio TEmporal Low Light ARchitecture)...
Samsung Losing Its Name and Integrity on Mar 04, 2016
Samsung's video surveillance division told everyone that nothing was going to...
Testing Samsung 1/2" Wisenet III Camera on Dec 01, 2015
Continuing our series of 1/2" super low light tests, in this report we look...
Samsung Covert WDR Camera Tested on Oct 07, 2015
IPVM member Steve Beck asked us in IPVM chat to test the Samsung covert WDR...
Hikvision Darkfighter 1/2" Imager Camera Tested on Aug 31, 2015
Can Hikvision beat Axis and Samsung in pure low light? The Chinese...
Samsung Wisenet Lite Cameras Tested on May 11, 2015
Far lower-cost MP cameras are a major trend now. So far, the 'Chinese' have...
WDR Camera Shootout 2015 on May 04, 2015
This is the most comprehensive Wide Dynamic Range (WDR) IP camera shootout...
Uniview Starlight Camera Tested on Apr 28, 2015
The company claims $263 million in 2013 revenue and to be the third largest...
Samsung WiseNet Lite Challenges Hikvision Low Cost on Apr 10, 2015
It has been the 'Chinese' pushing down IP cameras at a feverish pace. Now,...
Axis 4K Tested (P1428E) on Oct 29, 2014
[UPDATE August 2015: We recently updated firmware on this camera for an...
Top Manufacturers Gaining and Losing Ground 2014 on Oct 27, 2014
IPVM survey results of 100 integrators show what manufacturers are gaining...
The Worst HD Quality Camera Ever (Samsung 1280H) on Oct 15, 2014
Samsung, what are you doing? Their new 1280H offering significantly...
Winners Losers Fall 2014 on Oct 13, 2014
We are all losers, IPVM included. The historically poor new releases for...
Testing Axis High End HD Camera Q1615 on Sep 15, 2014
Axis core focus is the high end of the market. Their newest high end camera,...
Testing Samsung vs Google/Dropcam on Jul 14, 2014
Samsung is charging hard into IP cameras. Last year, they attacked the...
IP Camera Costs Comparison and Trends 2010 - 2014 on Jun 25, 2014
Over the past 4 years, the average price of 100+ IP cameras surveyed has...
Axis Advances Its Best Overall Camera on Jun 17, 2014
While Chinese competitors rush to sell HD cameras at 1/5th to 1/10th the...
Comments (24) : Subscribers only. Login. or Join.