We bought the Samsung SDH-B3040 kit shown below: 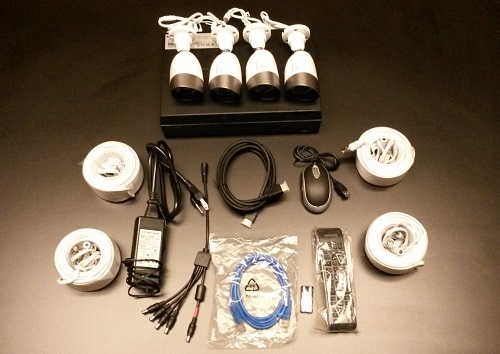 This is Samsung's first entry into the HD analog market, making them the biggest brand to back AHD and increasing competition against rival HD analog offerings from Dahua and Hikvision.

Though inexpensive, Samsung's AHD kit suffers from DVR usability issues and crashes not found in other low-cost options. Coupled with average imaging performance, this is a poor offering.

However, Samsung's adoption of AHD is part of a "second wind" for AHD, which had lacked major brand support. With others adopting AHD (Digital Watchdog, EverFocus) as well, the HD analog market is potentially more fractured. Nonetheless, AHD offerings need to improve to be seriously considered and competitive for those who are price sensitive but want at least decent quality.

This release is from Samsung's consumer line. Samsung says a future professional / business offering for AHD is forthcoming. Hopefully that performs better. We will test it when it is released.

Key technical findings from our test include:

In our tests, the Samsung AHD DVR frequently crashed when connected cameras switched from day to night simultaneously, causing the DVR to reboot, disabling the system for 2-3 minutes.

The DVR's web interface requires Internet Explorer, and bizarrely, it must be run as an administrator in order to take snapshots or download clips. This may be confusing for many inexperienced users, or impossible, depending on IT policy, and is not found in any other DVR we have tested.

Users can search through recorded video and play it back from multiple cameras at once, which is a feature not commonly seen with low-cost DVR's such as this.

The DVR was able to view other manufacturer's AHD cameras without issue. SD analog cameras are also compatible but are not automatically detected. Channels must be manually switched to SD.

The included Samsung SDC-8440BCN AHD cameras performed similarly to other AHD and IP cameras in both full light and dark with IR on, with no notable performance issues.

There are two key issues which negatively impact DVR usability:

During our tests, the DVR crashed frequently when cameras switched from day to night mode, resulting in a reboot which disables the system for 2-3 minutes. We have not seen this issue in any other low cost DVR.

We show this issue in this video:

Here, we examine the web UI of the Samsung AHD DVR, and address a few of the issues with it, namely how internet explorer must be run in administrator mode in order to take snapshots and record footage.

The AHD kit includes not only cameras and DVR but power supply and 60'' siamese power and video cables, as well. This is similar to Q-See's HD analog and IP kits.

This image shows everything included with the kit: 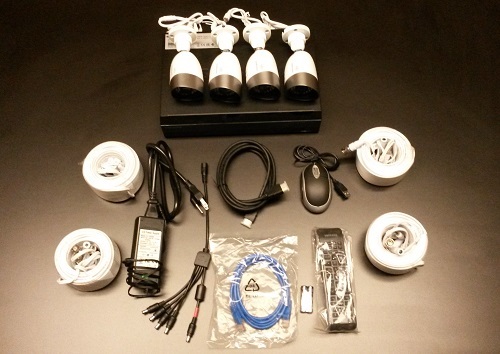 Here is the Samsung AHD DVR compared to the HOFO AHD DVR for the front:

Another side by side comparison from the back:

Side by side comparison of the included Samsung SDC-8440BNC AHD camera and the Sunivision AP-1157AHD13 camera from the front:

Another from the side of the camera: 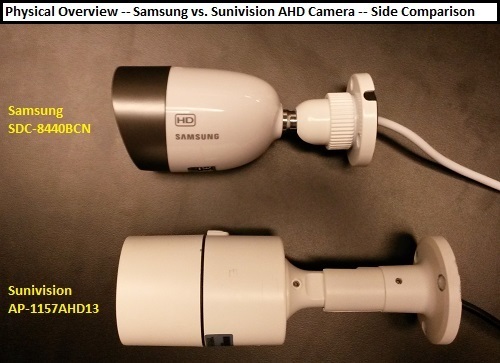 In addition to the included cameras, the DVR was able to view the low-cost Hofo and Sunivision cameras from our AHD test without issue. Additionally, analog cameras were compatible, though not automatically detected. Instead, users must select how many AHD channels will be used (4, 2, or 0), with all non-AHD channels compatible with SD analog up to 960H.

We tested the included SDC-8440BCN cameras against IP and AHD cameras to check image quality, in this FOV: 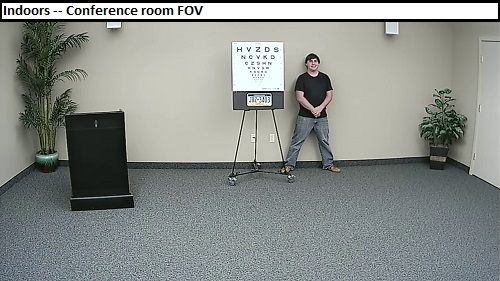 In full light, ~160 lux, the AHD cameras perform similarly, with all of them able to identify our subject and read down to lines ~4-5 on the test chart, with the license plate characters legible. We added the newest Samsung Wisenet Lite bullet IP camera to compare. 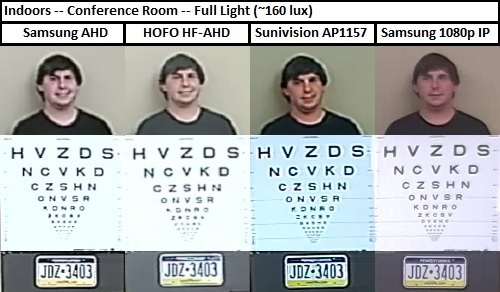 With the lights turned off and lux at ~0.01 and IR on, we tested each camera individually as to not skew low light image quality. Again, each camera tested can identify our subject but also overexposes our license plate. 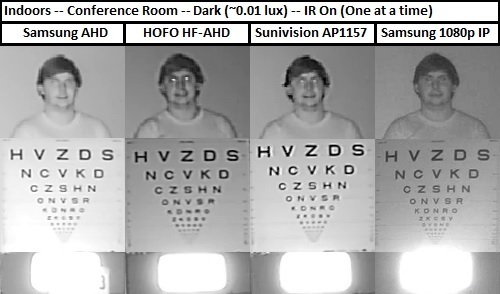