In this note, we contrast the pros and cons of each element and how to best use them in designing surveillance systems. 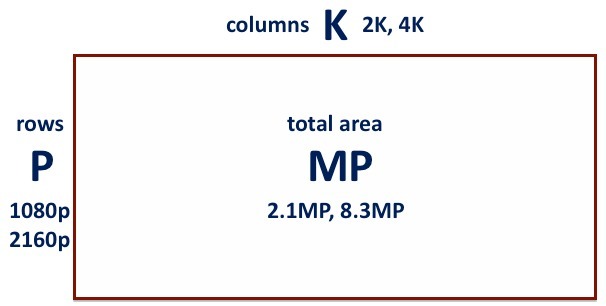 It is unfortunate that the convention for columns (P) and rows (K) use different metrics (by 'ones' for P, by 'thousands' for K). Regardless, one needs to memorize this in surveillance to navigate between the two.

The least used metric, though, is 'K', which has only started to be marketed / commonly used for 4K cameras. Because of that, many people will not be familiar with it.

On the marketing side, though, MP still sounds / shows the biggest number. For example, a 2K camera is ~2MP and a 4K camera is ~8MP. Notice that the K 'count' only doubles but the MP count quadruples. This is because MP multiplies the columns and rows. The bigger number often sounds more impressive.

A Note on Frame Rate / Avigilon

Though we have focused until now exclusively on pixels, 4K is a standard that also specifies frame rate, which is typically 24fps or greater.

On the other hand, most users tend to be more tolerant of lower frame rates than lower resolution. For example, most would reject cameras under 720p today but many would be more than happy with a 10fps frame rate.

Finally, it is important to always keep in mind, that pixel count / resolution does not equal or guarantee image quality (e.g., Pixels Determine Potential, Not Quality).

Many higher pixel count / MP cameras have problems with wide dynamic range and low light as it is more difficult to implement the image processing that delivers true WDR and super low light performance.