ISC West is a disaster but there's a winner for now. Reed and SIA have burned the manufacturers in spectacular fashion. 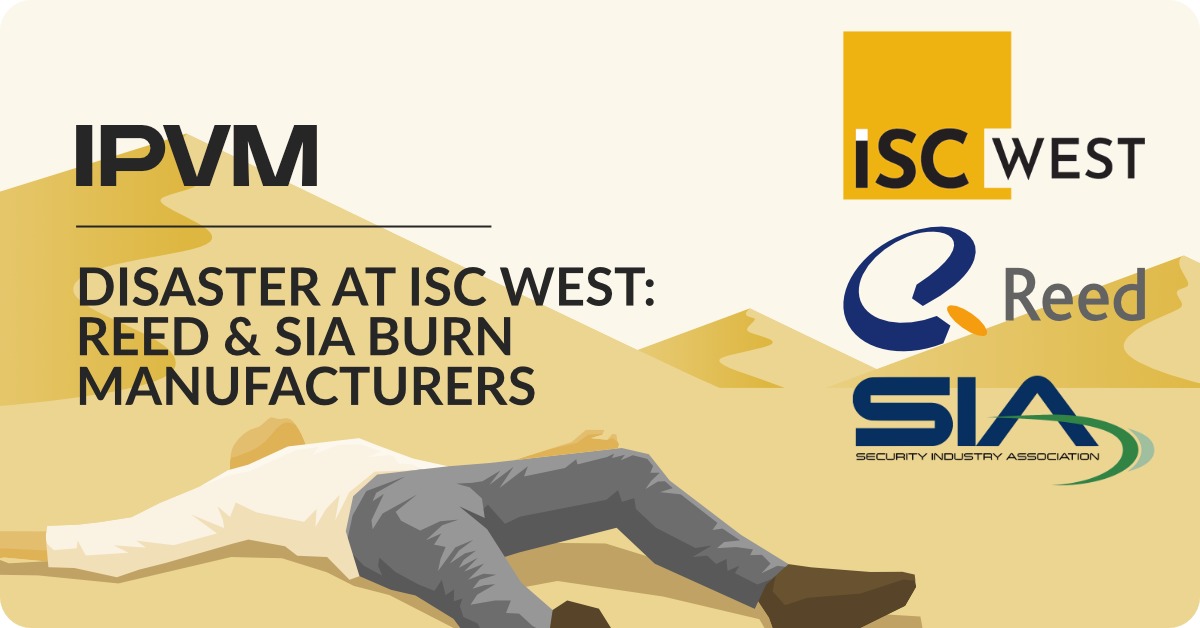 Reed / SIA Already Made Their Money

Flaming the manufacturer's anger is that Reed / SIA has essentially made all their money for the 2020 show from the manufacturers. Attendees pay ISC West virtually nothing while manufacturers exhibiting have to pay, in full, many months in advance. And Reed is refusing refunds.

However much of a disaster ISC West July 2020 is, it does not matter financially to Reed and SIA. They keep all the money. The loss goes all to the manufacturers.

The July 2020 show is starting on a Monday, which is a big problem compared to ISC West's normal Wednesday start.

Exhibitors need to set up during the weekend, which means paying much higher union labor costs, forcing their employees to sacrifice a summer weekend and having to do setup without any air conditioning while daytime temperatures average 105°F.

Attendees either need to travel on a Sunday in the Summer or miss the first day to travel on a Monday. This invariably causes even further declines in Monday traffic.

Reed told us those dates were the only ones available. This is likely true, given the challenges of rescheduling such a large event, but the problems remain.

The Sands told us that the show can opt to pay to turn on the air conditioning during setup but Reed did not confirm whether they would, telling us generally:

Over the next month we will be working on many planning details to produce a high-quality event, and be providing lots of communications re operations, conference programming, and special events @ ISC West 2020.

Monday makes it worse, but any business event in July and especially with 105°F temperatures is highly problematic as many noted:

Even without coronavirus concerns, a rescheduled business trade show in July starting on a Monday will have massively declining attendance.

And even if you are the SIA director who dismissed coronavirus, the shutdowns spreading across the world are going to further reduce the number of people willing to fly out to a trade show, even if these shutdowns are lifted before July.

Four months ago, we wrote about The Cowardly, Greedy "Leaders" of Video Surveillance - SIA.

It is the same scenario playing again. SIA is so fixated on its short term money and so incapable of standing up for what is right, that this disaster unfolds in slow motion.

SIA did not reply to IPVM's requests for comment.

Reed And SIA Will Lose Too

But the irony is that Reed and SIA will lose from this as well. A month ago, ISC West was overwhelmingly viewed as the most effective American trade show for manufacturers (see, e.g., our 2019 statistics). Now, legions of manufacturers are irate at Reed and SIA for forcing them into this position.

The manufacturers stand to lose a lot in 2020 but Reed and SIA will get theirs too.

Incredibly, ISC West has raised exhibitor prices for 2021 and are sticking to it:

They are going to face a sharply rising number of exhibitors who balk at all of this - demanding discounts, downsizing their booths or quitting the show in 2021.

This could have been avoided by canceling the show this year, taking the loss now but keeping the goodwill they have with their manufacturer customers.

That this will be a disaster is not hard to understand. It is no obscure technological topic. Reed and SIA obviously know the problems of rescheduling a show in July on a Monday in the midst of coronavirus. They just do not have the backbone to stand up and protect their own long-term interests.

Reed / RX Sued by CompuSystems Over COVID-19 Show Postponements on Jan 21, 2022
Many exhibitors were angry at Reed (now RX) the owner of the ISC shows for...
Reed Reverses, Demands 100% Penalty For Exhibitors Dropping ISC West 2021 on Jun 04, 2021
The deal has become much worse for manufacturers. Last month, Reed told IPVM...
2020 Mid Year Video Surveillance Industry Guide on Jul 27, 2020
The first half of 2020 has been shocking, for the world generally, and for...
Don't Deceive. Lessons From Scott Schafer on Mar 20, 2020
Deception is bad. We can learn some important lessons from Scott Schafer, a...
Comments (88) : Subscribers only. Login. or Join.