Rain can ruin surveillance video, and your housing choice might be making it worse.

In this test, we shot out the five most common form factors of outdoor housing: box, full size dome, minidome, full size bullet, and compact bullet. We placed them at about 12' against the side of a building to simulate real mounting locations and observed them over the course of a 3+ hour rain storm.

We look at these key questions:

Therre are three key takeaways from this test:

For best performance in rainy conditions, box or bullet form factors are recommended. Box camera housings with integrated wipers may be the best choice in areas experiencing heaviest rains.

If minidome cameras are used outside, use pendant mounts if possible to reduce droplets falling on the dome and dripping past the lens. If cameras must be mounted flat to the wall, locate them under an overhang if possible.

This test was performed over the course of 3-4 hours. Total rainfall during this time was about 1/4". Though not heavy, rainfall was steady throughout the day.

Though all housings performed similarly in this test, heavier rain, snow, or sleet may have different effects. High winds especially may drive more droplets onto camera housings, causing more visibility issues. Because of this, these results should be taken as guidelines, not rules for all conditions.

Mounted flat against a surface, minidome cameras accumulated rain on the dome in a matter of minutes in our test. This continued throughout the test period (3-4 hours of steady rain tapering off to a drizzle) with large drops obscuring the FOV as seen here: 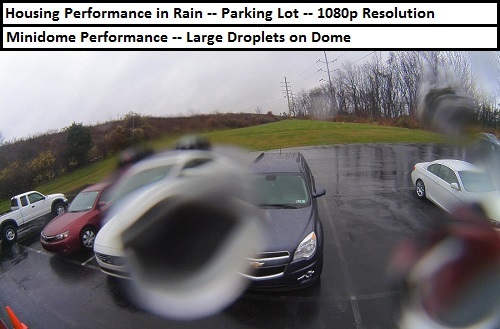 Because of this poor performance, minidomes without sun shields should not be mounted in this orientation if at all possible. If they must be used, for cost or aesthetic purposes, consider the following:

In housings which included them, extended sunshields helped to shed rain from the housing. Extended outward from the lens, they prevented precipitation from hitting the enclosure window and moved falling droplets farther from the lens, reducing their size relative to the FOV.

A falling droplet can be seen here (in only one frame of video) falling from the sunshield of the tested box camera housing. 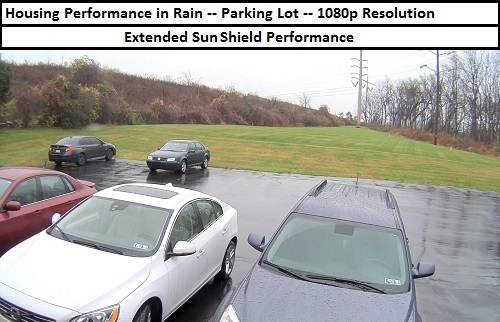 Aside from the minidome's notably poor performance, most housings shed rain about equally. The box camera housing with sunshield, full size dome, and both sizes of bullet camera all did not experience practical issues from water striking or dripping in front of the lens of the camera during our test.

A comparison of all cameras is seen here. Camera FOVs were roughly standardized where possible, with the exception of fixed lens models (compact bullet and minidome). 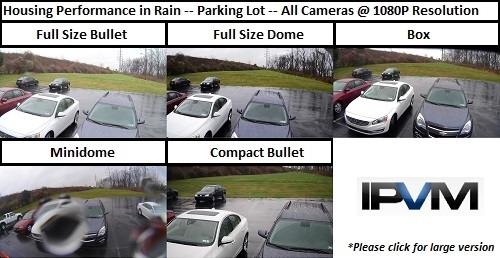 Dirty Dome Camera Test on Nov 28, 2016
Dome cameras are the most widely used type professionally but many note that...
CleanView Claims to Solve Rain Surveillance Problems on Jan 13, 2015
Raindrops collecting on domes can lead to big problems. Not only can they...
Comments (9) : Members only. Login. or Join.