Practical Solutions To Piggybacking and Tailgating

Piggybacking and tailgating are two of access control's biggest threats. In this note, we share survey results from more than 100 integrators about the specific steps they have implemented to solve them.

We asked "How do you deal with the problems of users sharing credentials (ie: Piggybacking) or holding doors open for others (ie: Tailgating)?"

More than 100 integrators and end users responded. A breakdown of their answers into common groups is given below: 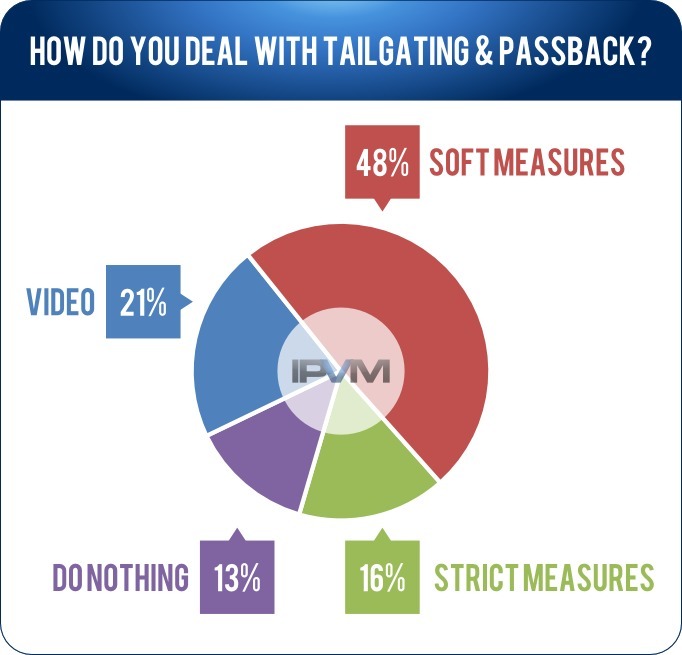 And then a full breakdown of all answers is shown below: 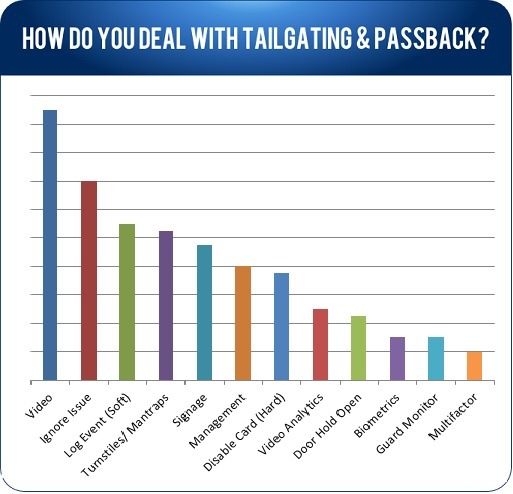 For those not familiar, the two problems we polled in this question are particularly difficult to address and resolve with traditional access control methods. These issues are commonly defined as:

With that said, the options below were the most commonly cited:

In the sections below, we list the individual approaches respondents gave in controlling or addressing the tailgating and pass back problem:

Video Integration: Clearly integrating cameras with access is a popular approach, with many responses mentioning it as the first option even when others were given:

However, unless video is actively monitored or tailgating/passback events addressed, it is not a magic solution for the problems.  Even placing cameras where they are plainly visible or including public view monitors can become ineffective and be ignored over time if the issues are not actively addressed or paired with other methods.

These approaches take the hardest approach to preventing or address the issue directly.  Engineering controls like turnstiles, or 'hard antipassback' are used to outright physically prevent issues.

In this group, users install openings that tightly control how many people enter on one scan.  The tailgating risk is almost always eliminated, since a door cannot be propped or held open for anyone.  Rather, in order to advance the turnstile, each user must present a credential.

To a lesser degree, users mentioned hard antipassback controls to actively deny credentials from being used out of sequence.  This typically means a card cannot be used at the same reader twice (especially in quick succession) without being used first at other readers.  In most cases, the logical flow of users in an access controlled facility are then unable to simply handoff or 'passback' an active credential even through a turnstile, fence, or window.

Other users reported stationing manpower at access point to manage the risk, and that guards directly addressed problems with offenders when they happen:

These steps are less stringent, and potentially leave systems open to abuse risk, but are less expensive, less obtrusive, and overall represent the most popular ways of dealing with the issue.

Many responses suggest hanging signs in strong language is effective. While doing nothing to actively mitigate the risk, signage is a compulsory reminder to users to not misuse or undermine the access system.

Another common, if not absolute, method of controlling the risk is to leave enforcement and training to personnel managers. Through a mix of confrontation, procedures, and training the security threats of tailgating and pass back are managed.

A number of responses, about 15%, mentioned that they do not address the issue at all, or the response is weak.  The security problem is simply not perceived to be great enough to warrant aggressive response or additional costs to address.

One aspect is clear: totally managing the problem is difficult and takes a number of solutions used in conjunction.  Several answers addressed the difficulty in quashing the problem, and the multiple methods needed:

Access Tailgating: Biggest Security Vulnerability on Jul 22, 2021
What is the 'biggest' access control security vulnerability? One security...
Axis Releases Access Credentials - Insecure But Convenient on Nov 02, 2016
Axis continues to build out their own end-to-end 'solution'. The company...
The Passback Problem on Sep 14, 2016
Every security system has flaws, even high-tech ones. While Electronic Access...
Comments (4) : Members only. Login. or Join.