Certifications are a common option for technology professionals looking to improve skills and gain validation. But how about for project management?

The most well-known project management certification is the PMP but how well adopted is it in physical security? What other options are security integrators using?

I'm a huge advocate of standardization in the industry leading to best-practices. I've been a practitioner of the PMI model of Project Management for years and appreciate the value it brings to a normalizing of project reporting and controls. That said, much of the process is akin to hitting a nail with a sledgehammer. I know that all the models (cpsm and pmp) have limited implementations that allow for a more nimble approach to project management. All-in-all, though, I think doing nothing leads to the chaos that exists in many projects today. Where the customer holds all the controls (scope / schedule / budget) and the contractor is at the mercy of the customer's whims.

Good project controls (even simply managed and implemented with proper application) can achieve tremendous positive results such as:

- Solid knowledge base / understanding by encoding the past to prepare for the future
- Accountability to ensure that gold-plating projects doesn't occur
- Creating partnerships with vendors, not adversarial relationships the lead to project failure.

I think that the security industry needs to not only fully embrace PM as a core value, but it should be in our DNA. Every job we do is a project (unless their maintenance and then they are programs) and can be managed in a consistent and thoughtful manner.

I was a PMP from PMI back in 2000.  As a consultant, it helped me sell myself into organizations as a Project Manager.  There are some nice tools to help with planning.  But what I have found over the years that the individual and their ability to communicate is far better than any certification title.

I have worked with dozens of PMP certified Project Managers that could not manage a team or project toward a successful conclusion.

This looks like something I may be interested in. Is this something I could learn from, or is it just something useful for job searches? I'm already pretty comfortable where I am, but I'll jump on this if anyone who has it can tell me it was worth it.

There are multiple tracks to get you going with either PMP or CPSM. The PMP is more widely used so you can get your certification started online OR you can look for a PMI bootcamp in your area. The PMI Chapters are very organized and often sponsor local boot camp options. Optionally, you can download an app like VCE on your phone and load up the PMP prep questions.

The best way to get ready for the PMP is to become a member of PMI and download the PMI-BOK (Body of Knowledge) that has all the disciplines and areas of study necessary to take the test. Of the two test, PMP is more rigorous and requires that you have the following:

- 9000 hours of managed projects and years of experience (this may have adjusted up in recent years).

I find the PMP to be the most valuable as it has cross-industry application and is a sought after certification that carries an economic advancement for those who pursue it.

Thanks for the information Ed, really appreciate it!

PMP usually (but not always) pays for itself. You invest some personal time and money, then you get your pay rise.

Does someone really need a certification to schedule incessant meetings, write up meeting minutes, and put together an action item list?

I've really soured on the PMP over the past few years.  It once seemed to be something worthwhile, like what an RCDD is to telecom folks, but it is increasingly directed towards software development PMs.  That makes it increasingly irrelevant to construction/security.  The lack of any other valid and popular certification options make it a default go to cert for young PMs trying to bolster their resume.  HR and recruiters (or the filtering software they use) at least recognize the acronym so an artificial value is assigned to it.

Honestly, I don't think you've ever really used the process of PMI effectively. A good PM can save your project (and sometimes your life).

There are concepts in PM that I see violated every day -

All of these are commonsense concepts that most people don't have a grasp of at a fundamental level. I think that a Certification is necessary, but of all the certs that I think bring relevance (based upon the experience requirements) PMI has done a brilliant job of ensuring that people who get their PMP are solid practitioners of the craft. Its such a transportable skill that I am constantly shocked that more people don't at least get basic training in being a PM or PS.

I'm not saying the entire body of knowledge is invalid.  Some PMBOK concepts apply to any industry.  Certainly, scope creep is a vital item to understand and avoid.  While incredibly useful, the iron triangle can be more quickly summarized by reading a bumper sticker: 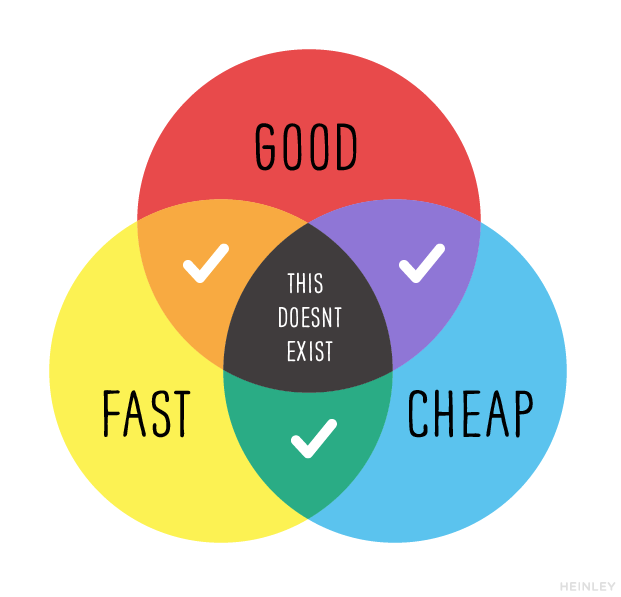 I feel that the PMBOK and much of the PM training/methodologies in the industry focus so heavily on entry-level items for a software development PM to understand that the value of it in security integration is limited.  If someone were to start work at a security integrator with no knowledge of construction, structured cabling, networking, cameras, or access control but show up with a PMP certificate their odds of failure are substantial.  If that same person were to show up with an IPVMU, CCNA, Network+, or even an A+ cert their value would be greater to me because I would not have to spend considerable time explaining some basic concepts important to security integration.  By comparison, I could train on what scope creep, the project management triangle, and gold plating are in relatively quick order.

So - let me clarify and agree. If you come to the table with NO other marketable skills other than PMP, then I would suggest you shouldn't be in the industry. Understanding the SMEs in the discipline would be critical for my comfort levels. If a domain expert is not present (CCNA, PSP, CPP or can demonstrably show skills in the requisite technical areas) then I'd be hard-pressed to accept them as anything other than a scheduler and move them quickly to a paper-pusher.

If you come to the table with NO other marketable skills other than PMP I'd be hard-pressed to accept them as anything other than a scheduler and move them quickly to a paper-pusher.

What if that same person came to the table looking to become a security integration PM but had only a CCNA?  All other variables the same, would you relegate them to paper-pushing or would you be more inclined to train this individual in project management?

Had a professor in business school who taught a class in project management. His view was that a lot of the certifications out there are geared to make money for the company providing the certification. He used the PMP as an example, companies will rarely follow strict PMI models for projects. He told a story about a person from HR called him about a job he was interested in and asked if he had his PMP. He replied that he did not have his PMP but did have a masters degree in operations management from MIT. Later he found out that HR didn't even push his resume to the hiring manager because of his lack of a PMP, even through his education qualifications were well beyond the knowledge needed for a PMP. Found the story interesting and a good example of how HR departments screen employees that would otherwise be very qualified for a position.

Personally, I don't see project management certifications like this being of much use in my company. But could be useful for the larger integrators. Industry experience has more value than project management knowledge, in my opinion. I may have made 3 Gantt charts for my company in the past 6 years and those were mostly geared towards getting a sale. I do see how Six Sigma concepts could be applied in controlling costs for a security integration company.