iControl has raised over $100 million in VC funding to transform the home security market. 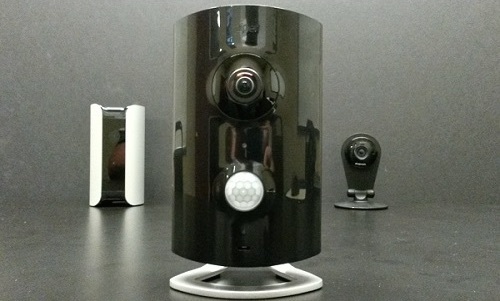 The iControl Piper NV includes uncommon features like a Z-Wave integration, environmental monitoring, and built in siren, all features Dropcam does not offer.

We purchased a Piper NV [link no longer available] to see how these features worked and how it compared to Dropcam and Canary in these key areas:

There are three key advantages found in few competitors:

Piper's appeal is limited by weak image quality and IR illumination, as well as limited usability (lacking search and export), coupled with a price tag higher than the vast majority of competitive options. Users simply looking for easy to setup remote monitoring would be served better by Dropcam Pro or Canary (which offers some of the same environmental monitoring functions and built in siren as Piper).

The Piper NV [link no longer available] sells for $279 USD direct or through online retailers. This is $79 more than the $200 Dropcam Pro or Samsung Smartcam, and ~$29 more than Canary.

Piper also has a cheaper $199 model (Piper Classic [link no longer available]) with 2MP resolution vs. 3MP and no integrated IR.

Compatible Z-Wave accessories [link no longer available] for Piper sell for $44.95 for switches and dimmers, $39.95 for door/window sensors and $24.95 for range extenders each.

Piper's cloud storage is free, offering "Up to 1000 snippets of recorded events" according to their support. Dropcam charges $9.95/month (7 days) and up for this service, while Canary offers only 12 hours of clips for free ($9.99/mo for 7 days storage).

We take a look at the physical construction of the Piper NV briefly in this video:

In terms of size, Piper is much larger in size than Dropcam Pro and roughly the same size as Canary. Below is a side-by-side image of all 3 cameras: 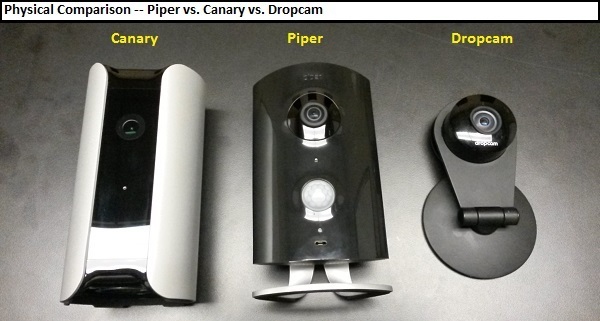 Initial setup for Piper is simple, with the mobile app walking users through creating an account and adding a camera. The camera is setup via wi-fi and after a ~5 minute setup process, the camera checks for firmware before launching to the mobile apps dashboard.

In the video below we review the Piper mobile app and each of its functions.

The app's design is "busy" compared to other consumer models like Dropcam or Canary, with numerous buttons, tabs, and controls. It can be confusing to find specific settings as well. For example, Z-Wave devices are added via a menu in the settings screen, but users must go to the "controls" tab to set a schedule for lights/switches, and to the "rules" tab to associate the device with an event. Consolidating these controls into fewer pages would reduce this confusion.

Piper includes a "Home Vitals" screen, showing environmental data not common in consumer cameras. Piper shows not only inside and outside temperature/humidity, but noise levels, light levels, and motion levels, in a graph of the last 48 hours.

Users can set up rules for each of four modes (which cannot be changed): "Stay", "Away", "Vacation" and "Off" (notification only). Rules may be triggered based on VMD, audio detection, temperature, or Z-Wave contact input, and trigger recording, the built-in siren, Z-Wave switches, and notifications to the user and/or their "Trusted Circle."

Trusted Circle notifications are limited, however, including only text (or phone call), no video or snapshots. This image shows the content of a sample notification. Voice alerts are simply a text-to-speech reading of this notification.

Note that Trusted Circle contacts do not have access to the user's Piper, either. Each Piper may have only a single account, which must be shared among users.

All the above functions are shown in this video:

Users are presented with a list of events in the Piper app, with no way of searching for specific types of events or specific dates. Bringing up a clip shows a timeline displaying motion and other events which can be scrolled through, but the timeline is not labeled by time of day or even date, so searching for clips recorded more than a few hours ago is difficult.

Additionally, there is no way to export a clip or even save a screenshot, making sharing video with authorities difficult in case of a crime.

Piper includes the ability to add Z-Wave accessories [link no longer available], a feature found in few competitors. This is limited to magnetic contacts, switches/dimmers, and range extenders, with no ability to add thermostats, PIRs, or other accessories common in full blown home automation systems.

Z-Wave devices added simply, with users putting Piper in a discovery mode, then pushing the activation button of the device. We had no issues connecting contacts or switches in our tests.

Piper NV is 3.4MP, which is higher than most of the consumer-grade cameras on the market. However, due to the 180° FOV, video is warped, most notably at the edges, seen below. 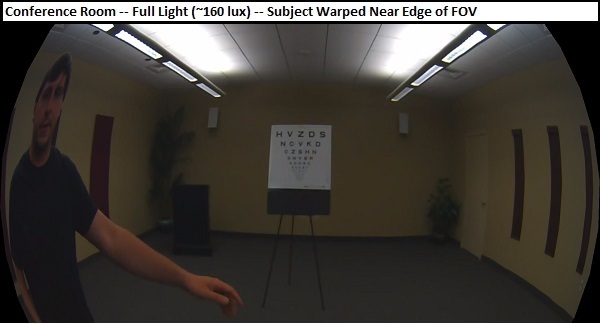 Piper's video is also darker than many competitive cameras by default. Users may adjust brightness up using a live view control, but this appears to adjust only brightness when viewing, and this setting is not saved, forcing users to readjust it whenever video is viewed.

This image shows the difference in brightness in full light. Note that this control does not function in night mode with IR on. 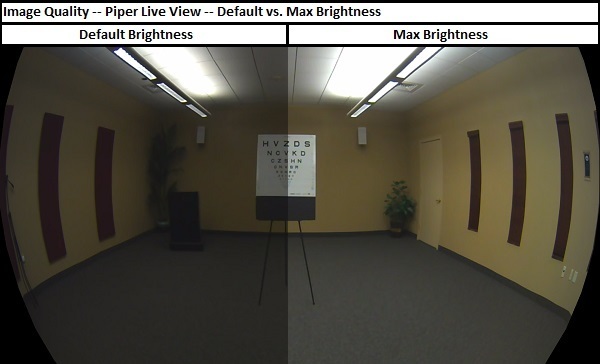 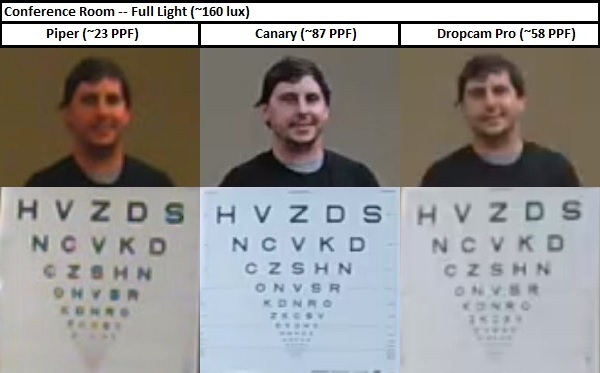 As mentioned above, warping on the edges of the FOV is a problem, and when we reached out to Piper for comment, they mentioned that "image quality looks normal" and there is no way to dewarp the image.

In the dark, the Piper NV's integrated IR is weak around the edges of the 180° FOV. However, subject and objects near the center of the FOV are illuminated well, albeit slightly under or overexposed. 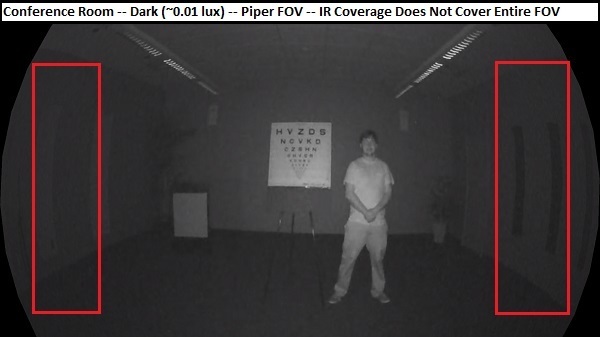 In low PPF brings low details in our subject and test chart again, with no camera providing usable images of the subject, and only some legible letters on the first line of the chart. 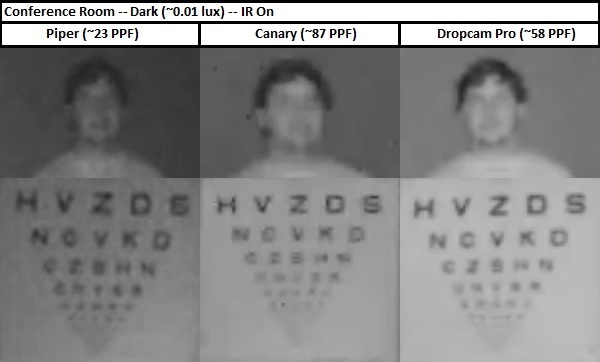 Piper's IR illumination has a central hot spot, with dim illumination at the edges, seen here as the subject moves across the room:

Axis Launches Z-Wave IP Camera on Jan 31, 2018
Z-Wave is big in home automation but not in video surveillance. Now, Axis is...
Directory Of Consumer Security Cameras on Aug 16, 2017
The consumer camera segment continues to grow, with new startups and models...
ADT At Risk With Alarm.com, Comcast, Icontrol Deal on Jun 24, 2016
One of ADT's direct competitors has purchased a core piece of the company's...
360° Motion Detection Camera Tested (Zmodo Pivot) on May 18, 2016
The Zmodo Pivot trumpets "motion detection in 360 degrees", claiming to...
Goodbye Dropcam, the $50 Home Security Camera Era Is Here on Feb 10, 2016
Remember those days not too long ago where a $200 home security camera with a...
Testing Smart Home PTZ (Remocam) on Dec 03, 2015
The consumer cloud video market is dominated by wide angle, fixed cameras...
Startup Review - Piper on Feb 26, 2014
An HD fisheye camera, alarm siren, temperature / humidity sensor and a Z-wave...
Comments (5) : Subscribers only. Login. or Join.