Panasonic has gotten into panoramic cameras, with their launch of their WV-SF438 and WV-SW458 models. As part of our groundbreaking Panoramic Camera testing series, we ran a shootout of Panasonic against Axis, Mobotix and Vivotek panoramic cameras, as shown below:

Pricing for the two Panasonic models is as follows:

The WV-SF438 is indoor only. The SW458 is IP66 rated and available with either standard Ethernet connections or an M12 locking connector (WV-SW458M), often used in mass transit systems.

In this video, we review the form factor and physical features of Panasonic's panoramic cameras. Key points include:

In this video, we review the WV-SW458 web interface. Most features of the web interface are standard, and similar to other Panasonic models. Users should note the following, however:

Finally, this screencast reviews configuration and operation of Panasonic cameras in the VMS, using Exacq as an example.

These comparisons pit Panasonic against a selections of cameras from our panoramic camera shootout, at varying light levels.

In full light, Panasonic is one of the top performers in our tests. At 6', the subject's facial details and chart are both clear, and colors in the scene are true.

At 18', the maximum range we tested, against Panasonic performs well compared to others. Line three of the chart (TOZ) is more easily readable in the SF438 than others.

Lowering the lights to ~3 lux, at 6', Panasonic still performs well, but is notably dimmer than some, such as the Axis M3007. Both the M3007 and Q24 show more readable lines of the chart.

At 18', the WV-SF438 lags slightly behind others, notably the Mobotix Q24, with the chart difficult to read. Some details of the subject, such as clothing, can still be determined.

In our dark scene, the WV-SF438 produced no usable image. The M3007 and FE8172V allow for detection of the chart, but no recognizable details.

In our WDR scene, Panasonic performs well, revealing details outdoors which other cameras do not, such as the lettering on the pavement behind the subject. Only Mobotix shows more lines of the chart in this scene. 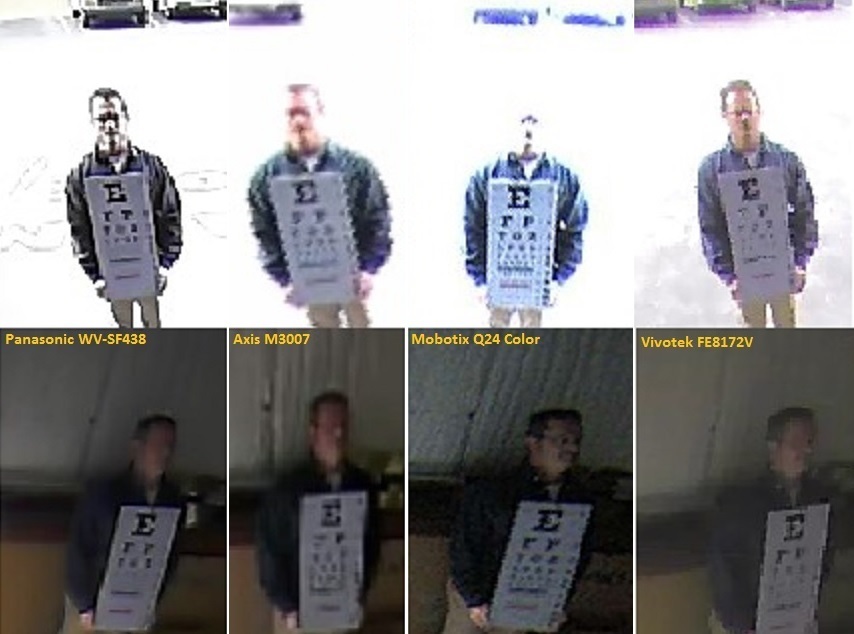