Bodyworn camera use continues to increase, with more police departments mandating it and the US pledging $75M for new cameras.

In this report, we share test results of the Panasonic Arbitrator BWC [link no longer available], part of Panasonic's line of evidence capture products (also including in-car video and evidence management). 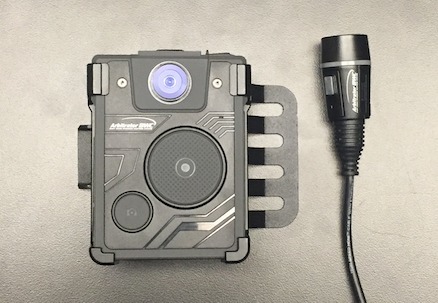 We wore it and shot it, testing while walking and running:

And shot it out against conventional IP cameras to see how it performs, including:

It is important to note that this is our first evaluation of a body worn camera, and therefore we cannot state specifically how it compares to other models. In the future, as we test more body worn cameras, we will include comparative analysis.

Compared to traditional 'fixed infrastructure' VMS systems, bodyworn camera management is far more complex. Bodyworn video is tied to an event (traffic stop, arrest, interview, etc.) by nature, with a each officer likely generating numerous clips per shift, each of which must be classified and reviewed, tied to a specific case number or report, and stored for long periods . Even a small department could potentially generate hundreds of hours of bodyworn video per week, with large departments likely in the thousands or tens of thousands.

Compared to traditional IP cameras, video quality was average to below average in full light and WDR and poor in low light. Also, Arbitrator's proprietary video format is not compatible with third party systems without exporting clips to open formats, a tedious process as clips must be copied one at a time.

MSRP for a single camera kit is $1,100 USD. This kit includes the camera, clip, and charging cable.

The Arbitrator software suite is sold as a recurring license, with an MSRP of $250 per year for 5 cameras. Discounts are available at 25 cameras and above. This license includes the client and server software and all ongoing updates, as well technical support.

The Arbitrator BWC is about the size of a deck of cards, with the lens, microphone, and large record and snapshot buttons on the front face. Controls on the sides change notification (LED/vibration), wireless transfer, and clip classification, with LED status indicators on the top.

We review the physical features of the camera here:

The camera includes a clip for mounting to shirts/uniforms, seen below. This clip includes an extended bracket which is intended to stabilize the camera against the wearer's body or body armor and prevent rotation and excess movement (seen to the right of the camera in the clip below). The camera's orientation may be changed in this clip by using different screw holes, so it may be clipped to a belt, for example, by rotating the clip.

We shot out the Arbitrator in full light and low light scenes to compare the camera to typical IP cameras for reference, using the Panasonic 6th Gen 720p model, the WV-SFV611L.

In full light, the Arbitrator provides moderately less detail than the 720p WV-SFV611L, with slight blur and less saturated video. Our subject is easily recognizable, however. 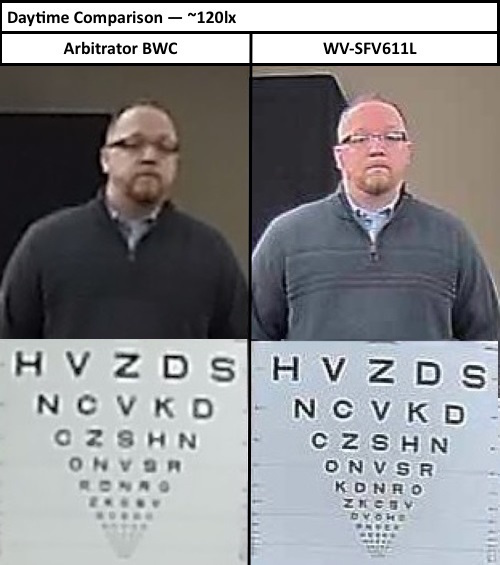 However, in low light, around 1 lux, the Arbitrator BWC produces no usable images of the subject, while the SFV611L still produces usable images, even with IR off: 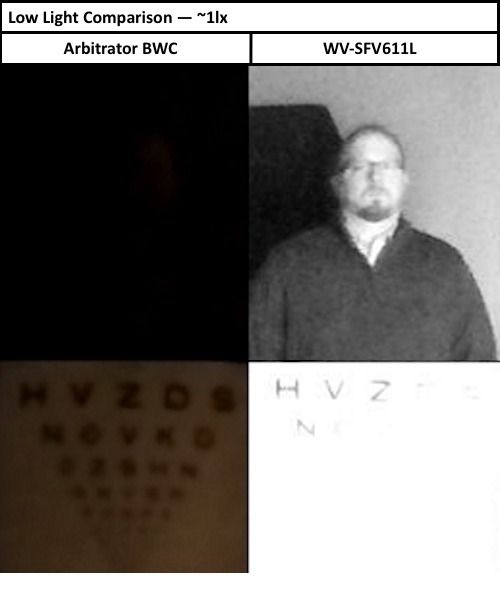 Finally, in a very dark scene, the BWC cannot see the test chart at all, producing essentially a black image, while the SFV611L still provides an image of our subject and the first line of the test chart. 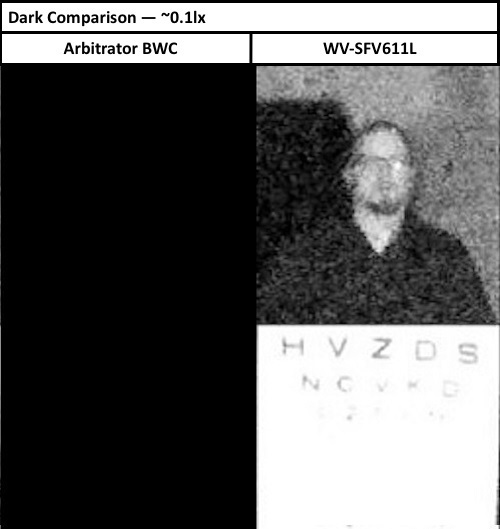 Dynamic range of the Arbitrator BWC is limited compared to a typical Panasonic IP camera. Below, we show relative performance of the camera as our subject enters an outside door.

Subject details are visible, though briefly washed out in the BWC (left), and then dark as the subject moves further into the building. By contrast, after initial washout in the WV-SFV611L (right), the subject is strongly visible against the open door as well as the dimmer interior area where his features are lost in the BWC.

In our tests, we found that the Arbitrator BWC's gyroscopic image stabilization had moderate effect when the wearer was running or walking quickly.

For example, when walking at a normal speed, there is motion in the video however, there is little jitter or shakiness.

Even at a full run, while the camera is bouncing significantly, video is relatively steady (though moderately blurred due to movement).

The Arbitrator Back End Client is the main user interface for the BWC, containing several key functions, overviewed in this video and reviewed in further detail below.

First and foremost, the Back End Client is used for downloading video. This may be accomplished in several ways, triggered automatically or manually:

The method used varies by department size and policy. Whichever method is used, the process is similar, shown in this video below:

Since Arbitrator uses its own proprietary, encrypted, video format, it must be exported to open formats for playback in standard players. Arbitrator allows exports in MP4 and AVI formats, seen below. Only one clip may be exported at a time. Note that Panasonic does not watermark or otherwise authenticate open format video, requiring their standalone proprietary player instead.

Videos may be tagged with call categories and case numbers, either with camera buttons in the field or via software after the fact. These tags relate to the type of incident the recording refers to (DWI, force used, field interview, etc.), as well as the case number. Tags carry through not only BWC video and Arbitrator in-car recordings, but to any imported files, as well (detailed below).

Arbitrator differs from typically VMSes in that it is intended to be used as a full evidence collection/management system. It automatically stores video from its own systems, but clips from other systems may be stored as well using its import feature, as well as other files and documents.

For example, departments may tag a DWI incident with its case number, and include bodyworn and in-car video. Then, after interviewing the subject, video and audio recordings may be imported and tied to the same case. Photos of damage to vehicles or property, as well as documents containing statements from witnesses may all be imported, as well.

We demonstrate importing in this video:

The fourth tab of the client contains reports, essentially system audit trail. This allows users to see who has accessed files and when, to ensure proper chain of custody and lack of tampering. A sample report below shows a user exporting files to MP4 and the associated log:

The Arbitrator Administrative Client allows granular control of settings for BWC, including classifications and case number formats, rules for short-term and long-term storage and archiving, user rights management, and more. For example, departments may move video from local storage to archive after 2 years, or lock editing classifications or exporting video based on the user's division.

We provide a brief overview of this client in this video: