ONVIF has long 'won' the standards battle for video surveillance.

But has the now 10-year-old ONVIF 'won' vs direct integrations? Undoubtedly, ONVIF has very wide support, with 9,496 (and counting) conformant products. However, most VMS and recorders still offer direct integration to many devices that typically offer deeper and more reliable support than ONVIF. Indeed, Hikvision recently disabled ONVIF by default in favor of its own direct integration, a blow to ease of using ONVIF with their cameras.

Has ONVIF become good enough and broad enough to displace direct integration? 150+ integrators told IPVM what percentage of camera integrations they used ONVIF for in the past year and why.

3 out of every 10 cameras were integrated using ONVIF in the past year, according to statistics IPVM gathered from integrators: 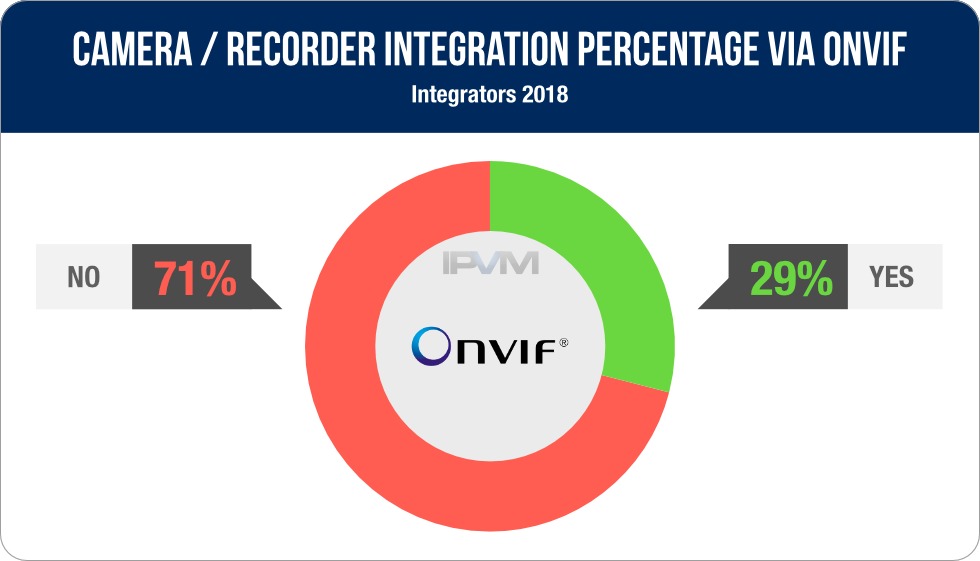 This would also mean the percentage of all cameras integrated with ONVIF is significantly less than those using direct integration, as the number of cameras using ONVIF would certainly be lower in past years as well, as the number of ONVIF conformant devices is growing.

As a follow up, I would be very interested in finding out what the top five or six functionalities not offered by ONVIF that makes integrators prefer deeper, camera 'driver' integration?

From our experience it's a question how well camera support ONVIF spec. For example common issues with ONVIF implementations from different camera manufacturers: enable VBR on stream channel, enable/disable motion detection (or any other camera analytics).

1. Motion detection with onvif requires a extra level of setting, due to most cameras own motion being of a different design, that's to say blocks on screen, and settings, like you know the normal (low low high higher names!). So motion detection on Onvif is an issue, most of time people opt to use the VMS / NVRs motion detection. VMS suffer as they need to process then internally so CPU takes a hit.

2. H.265 Support. which indeed supported on VMS, a lot of Onvif devices fail to send the correct describe element as part of the RTSP stream, which would allow a H.265 to be sent, hopefully Onvif will set this straight when everyone catches up in 2025.  ( a top previously covered by IPVM)

3. Events, be it motion as in 1, or login events, camera errors, backup problems. Event logging security or otherwise seems to not get much in way of support, making potentially device attacks harder to track. That's to say a good VMS could offer an alert notification centrally.

4. Local memory card recording. Many devices have the  "we support 128gb SD" or if your a Chinese vendor they like to call it TF card (odd when some are clearly some are microSD which there is no such TF device!). So recording to this card has little use, unless a proper Onvif is done so for instance a network outage could allow device to still record, and once back online the recording on the VMS / NVR could be retrieved. As far as I know Genetec do support this, but have never seen it 100% functionally. Axis offer their own take on this but as native only protocol.

5.Certificate management, SSL certificate or indeed any certificate for a device could be read by Onvif, wouldn't be a bad thing a VMS could then produce a set of true secure points of data security to prevent unauthorised access.

6.Configuration backup, there is almost no Onvif support for a device configuration backup, so many device have a so different set of data that makes this a tuff task, however Onvif could in fact make this simple with a extended set of parameters in a simple XML format which can then make a simper way, for a replacement of a device and also allow a VMS platform to backup all cameras, like a snapshot. with the occasional problem, a replacement could be installed and backup and running with minimal effort time and cost.

Manf#1, you bring up a very good point. If a VMS has a direct driver for a camera, why couldn't backup of the camera's settings me a function of that? Something to aim for, including making it a function of ONVIF, too.

This is a very good question!

In my perspective Onvif standard is very rich in functionality, sometimes even more then camera direct driver, and the upcoming profile T should really cover most of the needed areas that Profile S did not.

My opinion of ONVIF mirrors Gandalf's opinion on the mines of Moria... I would only choose that path if I had no other choice.

In my opinion, ONVIF is a disaster.  It's heavy, bloated, misleading and open to interpretation.  This is leading to it being implemented at the camera in 'slightly' different flavors.  We support it in our VMS platform, but I'd take a direct implementation to each camera any day.  That direct implementation is cleaner, more robust and generally works better for the customer in almost every scenario.

Whatever happened to PSIA :)

In my opinion, ONVIF is a disaster.

ONVIF is the worst of all possible IP camera standards, except for the other one, PSIA, which failed completely.

Just because it 'failed' doesn't mean it's worse.  That spec was lighter, better defined and way easier to implement than the ONVIF kitchen sink.

Just because it 'failed' doesn't mean it's worse.

Yes, it does. It is worse because no one supports it. Both of us are speaking philosophically at this point because PSIA is not making a comeback. What would you like ONVIF to do to improve?