Hot on the heels of making a splash at this year's ISC West with an 'award' winning new product announcement, OnSSI surprised many this week by announcing version 3.0 of its Ocularis platform. How much of an improvement is Version 3.0 over the previous 2.0? In this note, we examine this new release and evaluate its significance to existing OnSSI users and relative to competitors.

At its core, this update streamlines the software to permit easier management of large (multi-site, multi-server) systems. For the majority of users, this update will not change or benefit core features and functions. This update does not change competitive or functional positioning compared to competitive VMS offerings. The update makes it easier to update camera settings, views, and install software modules across a network, which is beneficial with working with distributed systems.

This announcement shares no implementation of recent Milestone Corporate 5.0 updates that are dramatic by comparison, so this update does not copy nor benefit from them. Rather, it focuses on changes unique to Ocularis.

The changes are a smattering of functional, backend, management, and user-interface updates. No major overhaul of any single element is noted, but the cumulative number of changes apparently warrant a full version update.

For users using older versions of OnSSI (ie: NetGuard DVMS or EVS), a direct upgrade to version 3.0 is permitted with a current SUP. If not, the incremental costs of upgrades from one version to the next will apply.

Under the '10th Anniversary Upgrade [link no longer available]' promotion, running until July 31st, if the end user buys a 2 year SUP for the base license and each system camera license, the user can upgrade to Ocularis 3.0 from whichever current version they are running for the cost of the SUPs.

What about Ocularis X?

OnSSI grabbed attention on the floor at ISC West with its announcement of a mysterious new product named 'Ocularis X'. With nebulous claims and confusion surrounding that release, it is important to point out that v3.0 is not to be confused with 'Ocularis X'. (See our review of that announcement titled 'What is Ocularis X?'). We asked OnSSI to clarify the importance of version 3.0 to the future update, and they responded with the following:

"Ocularis X is currently in controlled release, and is supported by both versions 2.0 and 3.0 of Ocularis. We expect general release as planned, at the end of June."

This update appears to consolidate a handful of minor improvements and tweaks into a single revision. While moving from version 2.0 to version 3.0 sounds dramatic, this update is rather benign and simply lays the framework for new functionality introduced with Ocularis X.

Below is OnSSI's 19 minute recorded webinar that reviews details of the release: 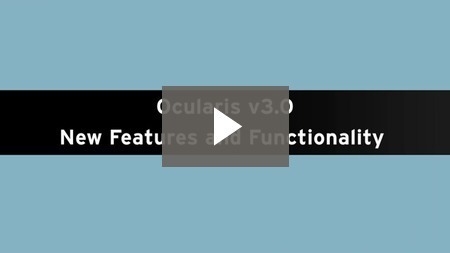