Milestone has announced a number of new product versions including XProtect Corporate 5 and XProtect Smart Client 7 as well as an interesting new feature for using smart phones as surveillance cameras. In this note, we examine each of changes and assess its competitive impact versus other VMSes such as Genetec and OnSSI.

The most fundamental change to the XProtect Corporate platform is adoption of a 64-bit architecture for the recording server. The existing 32-bit platform has been limited by cumbersome hardware constraints (i.e. 4 GB RAM) and OS choice restrictions.

Another update was ‘multi-live streaming’, that allows dynamically configuring stream profiles for associated cameras. A practical example where this may be useful is when viewing cameras on ‘flat networks’ or where bandwidth may be constrained – the streaming profile can be adjusted on the fly to optimize viewing.

A new system monitoring suite will be made available in this version, and to some degree automated ‘system health’ checks can be configured from this feature.

A brief mention of an enhancement to ‘Edge Storage’ was made – rules based retrieval of edge stored video will be made available – but due to limited number of compatible camera models, it appears that this feature will remain on the fringe for the time being.

These changes do not break new ground competitively and primarily change up to features available in other high end VMSes such as Genetec.

The common viewing client among all Milestone product releases is the ‘Smart Client’. Milestone announces a major cosmetic revision to that software with this new release. The color scheme of the new interface is also configurable, to be seen either in ‘dark’ or ‘light’ options. Here is a picture of the dark option: 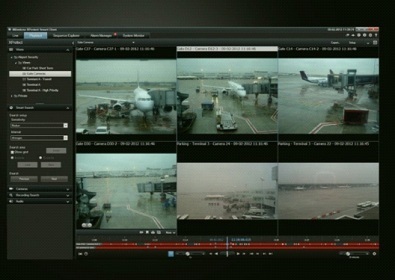 Starting with this release, Milestone XProtect Smart Client will include an interface delineated by tabs beyond the familiar ‘Live View’, ‘Browse’, and ‘Setup’ group. Alarms acknowledgement, Sequence Explorer, and Playback tabs will all permit navigation to those functions in a more intuitive manner.

Milestone has reconfigured the Timeline in such a manner that it combines several discrete features of the old client. Recorded video segments are displayed in the familiar ‘swim lanes’ format, but oriented in a left-to-right orientation.

Again, Milestone is not breaking new ground here – these features are common to other platforms – and show similiarties to partner OnSSI and primary competitor Genetec.

Milestone reports that Corporate 5 and SmartClient 7 will be released on March 28, 2012.

XProtect Mobile, and the introduction of ‘Video Push’

Milestone announced that an Apple iOS version of the ‘XProtect Mobile’ application is now available for download. Milestone is focusing on the Android and Apple mobile markets, and has made it clear that Blackberry and Windows Mobile OS integrations are not part of the short/intermediate term development roadmap at this point.

More interestingly, they introduced a future feature they call ‘Video Push’. In what appears to be an emerging feature set among VMS platforms, the inclusion of ‘non traditional’ surveillance recording has worked itself into the Milestone offering:

‘Video Push’ is the name of a feature that will enable mobile devices to ‘push’ live video from the device cameras back to the recording server via XProtect Mobile. The intent of this feature is to enable a greater situational resolution of events to be recorded by the video surveillance platform. For example, first responders or police officers will be able to ‘push’ video from their smart phones in real time as they respond to the events of duty.

An eligible mobile device must be discretely licensed in a manner similar to a surveillance camera or ‘screen recorder’ seat to be added to the platform. Be aware that the ‘hard’ licensing constraints of certain versions of Milestone software (ie – Essentials, at 26 devices) will be impacted by the population of license devices.

While availability of the video push feature is said to be 4-6 months out (Summer 2012 timeframe), based on Milestone's track record of repeatedly slipping release dates, we would not be surprised if this was not released until the end of 2012. Users should be cautious about planning for use of this feature.