A startup has an idea that will make any smoke detector 'smart' - a WiFi connected battery. Instead of replacing existing units with a Nest Detector costing a hundred dollars or more, Roost sells a replacement battery for 65% less that claims to bring 'dumb' smoke detectors into the cloud. 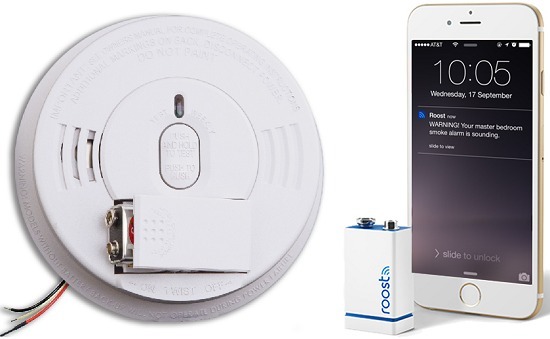 However, Roost does not offer the full range of features that Nest does. Are those shortcomings that will chance prospective customers away? We take a deeper look at Roost smoke detector batteries inside.

Roost claims to offer much of what Nest Protect does, but for existing smoke detectors and for a fraction of the price. Instead of marketing an entirely new device, the concept is built into the replaceable battery.

The company is wagering that it's $35 batteries will be more appealing than the Nest detector's $99 price, allowing homeowners to network three existing smoke detectors for the cost of one Nest unit.

But is it what consumers are looking for? While the financial case appears solid, it may not be a commercial success.  Last year, Roost launched a Kickstarter that earned the concept just under $100k dollars from about 1000 backers - hardly a blockbuster campaign when millions are raised by smart lightbulbs and residential access locks.  Since the campaign ended, the company has been finalizing design and production, and expects to start shipping product in Q3 2015.  Batteries can be preordered for $35 each from the company's webpage or from Amazon.

The main advantage to using Roost is that it networks notifications from the detector and sends them to users via smartphone app.  Whether it is a nuisance 'low battery' alert or a valid smoke detection event, Roost reports and pushes the alarm.

Roost is a retrofit product compatible with any smoke or carbon monoxide detector that uses 9V batteries.  With the industry essentially standardizing on that battery size, a significant majority of installed units can use Roost.

The video below provides an overview of the concept:

Aside from remote alarm notifications, the service can be shared with other app users.  So in the case of a user traveling, they can configure alerts be sent to a nearby neighbor or family member.

The unit alarms when battery capacity drops under 10% and will report the specific unit with the low battery.  Same for an actual alarm - the app traces a signal to a specific unit, potentially improving response and reaction time to a specific area rather than hunting around for the source. Other claims include:

Next Protect vs Roost

Not all features available in Nest are supported by Roost.  While both solutions claim to alert and remotely notify on 'smoke detected' and 'low battery alerts', Nest Protect includes additional light, temperature, and motion sensors that Roost does not. These additional sensors provide input information that Roost cannot, including the ability to verify smoke alarms with temperature detection or even the '1st generation' feature that disarms with a wave of the hand.

Roost does not feature integration with other devices like the Nest unit claims either. While Protect is integrated with Nest Cameras and Thermostats in a central portal, Roost is a closed device closed to adding to other systems. The company claims an IFTTT integration is in the works, but with no firm release date.

While Roost is about 30% the cost of Nest, there are several strategic weaknesses that could spell commercial failure: