Manufacturers: Get Paying or Get Sued - Avigilon Patent Licensing Program

This is just a month after an Avigilon employee and multiple Avigilon dealers went berserk on an IPVM discussion, calling "bull***', 'slander', denouncing 'rumors' on this topic.

Inside this note, we share what Avigilon's CEO said, how this helps solve a major Avigilon problem, the potential industry impact and the likely competitive responses.

The Business Model They Bought

None of this should be a surprise. The only real question was when, not if.

Avigilon spent $80 million buying patents and the enforcement program of Object Video, who did exactly that, go out, demand payment and sue if they do not get it (e.g., ObjectVideo Sues Bosch, Samsung and Sony).

That $80 million plus another $13+ million on other patents is quite a large sum for the surveillance industry and for Avigilon (who did $271.4 million 2014 revenue). Avigilon cannot spend that type of sum and simply use it for defensive purposes nor hanging the certificates in their office lobby.

It is just over 6 months since the patent acquisitions were made and in that time, Avigilon had been relatively quiet about them. Now, it is changing.

Avigilon's CEO opened up about their patent revenue plans on the call and the rolling out of the licensing program, noting that "we are very excited about revenue we plan to get in the coming years." He said Avigilon was already in negotiation with "several targets" but that the targets would "grow exponentially" as they ramped up.

Avigilon's CEO emphasized that a few manufacturers had 'come forward' and that this enabled an "arrangement on a friendlier basis rather than a confrontational one."

Avigilon's financials, as well as IPVM's calls with Avigilon investors, show that one of Avigilon's most pressing needs is increased profits. In addition to revenue growth sharply decelerating, Avigilon's profits have been competitively low, especially factoring in favorable exchange swings and aggressive R&D capitalization.

The patent program has the potential for significant profits. There are no R&D costs, nearly 300 patents are already granted and they hope to keep litigation costs minimal. If so, the profit margins approach that of software licensing. As Avigilon notes itself, it sees patent licensing as a way to fight commoditization: 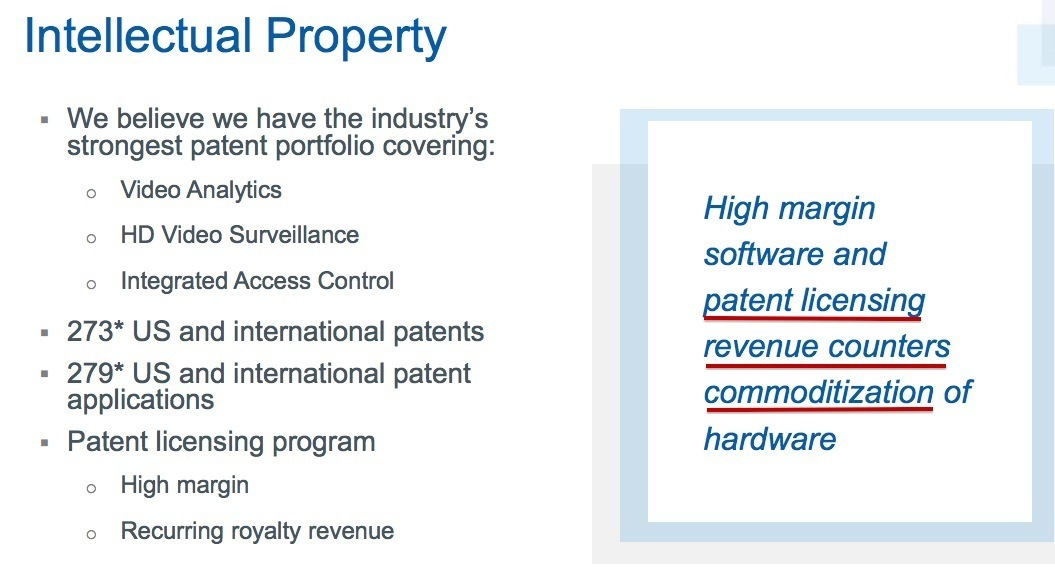 Though Avigilon is approaching $100 million quarterly revenue, their net income is in the sub $10 million range. OV itself was averaging ~$3 million quarterly in licensing revenue in 2012, so even that would be a significant bump for Avigilon.

Avigilon has the right culture to run an enforcement campaign.

They play hardball even with their own employees. Recall, this is a company who said their resigning CFO was sick, shortly before he got a new job, then facilitated claims about employees being greedy, and has numerous employee complaints about fear tactics.

Moreover, they do not have a sales culture or philosophy of being nice with others, e.g., 'they all suck' nor does Avigilon depend on partnerships, given their own end-to-end solution.

Avigilon is not going to shy away from getting what they believe is rightfully theirs and dealing with patent 'violators.'

For better or worse, Avigilon is a wolf and most surveillance manufacturers are lambs.

We think Avigilon has a big advantage here. They already have a track record inherited from OV, plus OV's 'enforcement' team, and a corporate culture that simply will not accept their competitors low balling or stonewalling them. Most manufacturers want to avoid litigation and the millions it can entail. The typical thinking is that it is better to pay off than spend the time and money fighting. Worse, manufacturers almost never work together on these things, preferring to be picked off one by one.

On the other hand, it only takes one determined Avigilon competitor who, for ideological or strategic reasons, recognizing Avigilon's ambitions, fights back hard and goes the distance to seek invalidation of the key patents in Avigilon's portfolio.

Maybe Avigilon will make money, and even hundreds of millions, but it is guaranteed to be a mess and a hindrance to the industry at large.

Axis / Avigilon Patent Litigation Ends With 3 Invalidated Patents on Sep 09, 2020
The multi-year, multi-district patent litigation between Canon and Axis...
Axis Wins, Arecont Cancels Multi-Imager Patent on Feb 26, 2018
16 months after Arecont publicly threatened Axis [link no longer available]...
Avigilon Access Control 2017 Examined on Nov 01, 2017
For more than 4 years, Avigilon has been in the access control business,...
Schmode Assistant Now Runs Avigilon Marketing on Sep 21, 2015
The excitement over Schmode's ouster from Avigilon insiders has quickly...
Vote Results - Next Big Thing 2020 on Sep 14, 2015
Over 230 integrators and manufacturers told us what they believe will be the...
Here's What Avigilon Should Do Now on Aug 24, 2015
An Avigilon partner asked: "What would be your Goal if you run...
Genetec: We Do NOT Support Avigilon on Aug 18, 2015
Two of the most significant surveillance manufacturers in the world,...
Now Avigilon's VP of Marketing is Out on Aug 13, 2015
In 3 months, the EVP of Engineering, the SVP of Sales and now the VP of...
Avigilon SVP Sales "Resigns" on Aug 05, 2015
Another Avigilon executive is out. This time it is the head of sales. Things...
Avigilon Weak Profits Continue - Q2 2015 on Aug 03, 2015
After spending $39 million buying back their own stock, one would think (or...
Avigilon Dirty Tricks on Jan 15, 2014
Avigilon's products are strong but their marketing is consistently and...
Comments (66) : Subscribers only. Login. or Join.