What should you be using to capture license plates consistently?

We tested 3 major types of cameras head to head to see the tradeoffs:

Those tests let us understand the tradeoffs during different times of the day and conditions.

Here is a sample of one of the 12 image comparisons inside:

For background on fundamental issues in capturing license plates, see:

Based on our tests, at ~40 mph and below integrated IR cameras may be the best option for license plate capture due to their lower cost and greater flexibility, providing better scene awareness than dedicated capture cameras. However, there are two caveats to using bullet cameras for capture:

Specialized license plate capture cameras may be the best option at higher speeds (>40 mph), though this is most typically seen in traffic surveillance, of highways or public thoroughfares. These cameras' fast exposure and resulting darker imaging compared to integrated IR cameras make them unsuitable for general surveillance of the scene, as well as identifying vehicle make and model.

Super low light cameras are not recommended for license plate capture. They may work, with greatly reduced gain and fast shutter settings, but these settings essentially eliminate the benefits of their increased low light performance. However, these cameras may provide the best overview and vehicle information of these three options, due to their color performance in low light.

We began in an outdoor scene, testing with vehicles moving 40-50 mph, across two lanes of traffic, about 22' wide, testing front and rear plate capture performance. 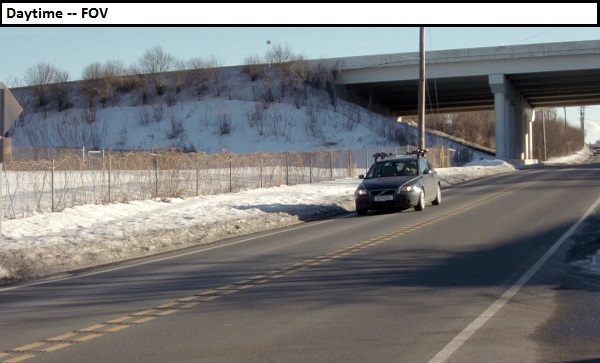 In this scene, all cameras are able to capture rear plates without issue. 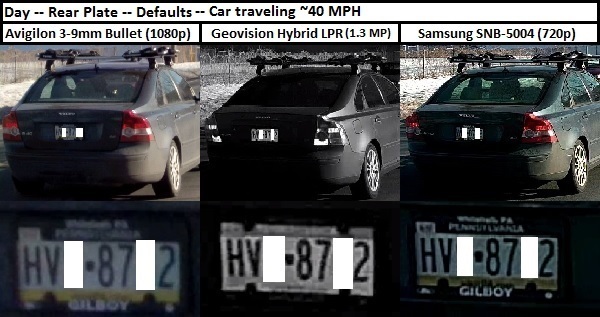 The front, European-style plate was no issue, either.

At night, with lux levels substantially darkened to >1 lux, we tested in the same scene. 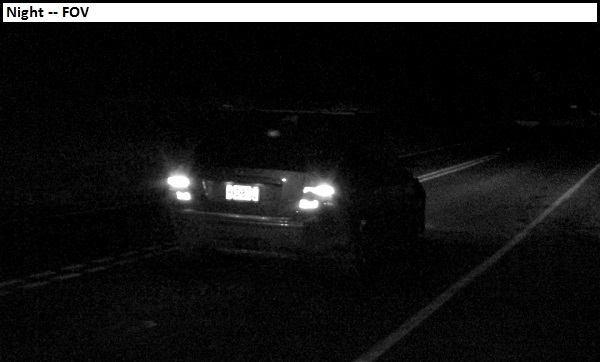 Using default settings, only the GV-Hybrid was able to capture the plate, with blur and overexposure obscuring plates on the other two cameras due to their much slower exposure (1/30s vs. 1/500s).

Speeding exposure to 1/500s in the Avigilon and Samsung cameras, the Avigilon H3 bullet is able to capture license plates, though the Samsung SNB-5004 is still extremely overexposed.

The front plate was also easily visible to the Avigilon bullet at 1/500s shutter, though the SNB-5004's image was further overexposed by headlights. The added resolution of the Avigilon bullet (1080p vs. 720p) helps it here, with characters slightly more legible than the Geovision GV-Hybrid.

The images below show our attempt to configure settings on the SNB-5004 so it may capture plates. Even at 1/1000s, blooming of vehicle lights obscures the license plate. Manually reducing gain from high to low provides marginal capture, but eliminates the performance advantages these cameras have in low light. 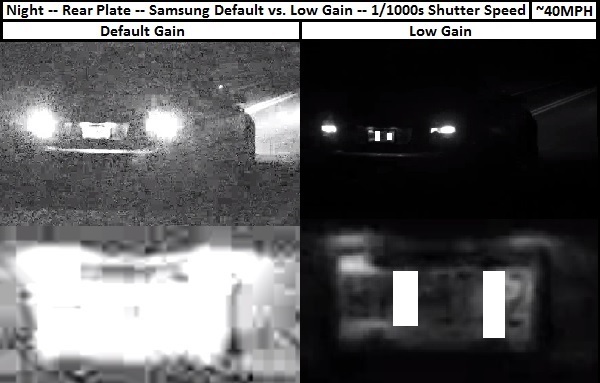 We tested the cameras' performance at slower speeds, 5-10 miles per hour, typical in parking scenarios, again across approximately two lanes, a 22' horizontal FOV. 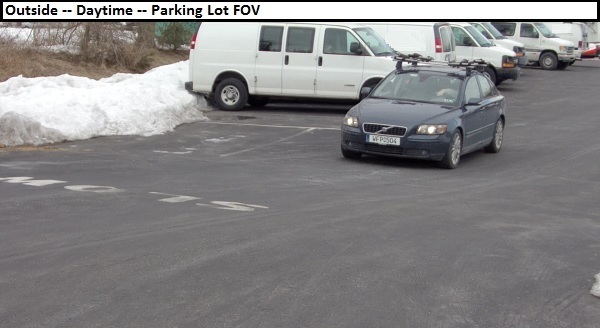 All cameras are able to capture plates in this scene without issue, both rear:

As well as front:

We tested in this same FOV at night, as well: 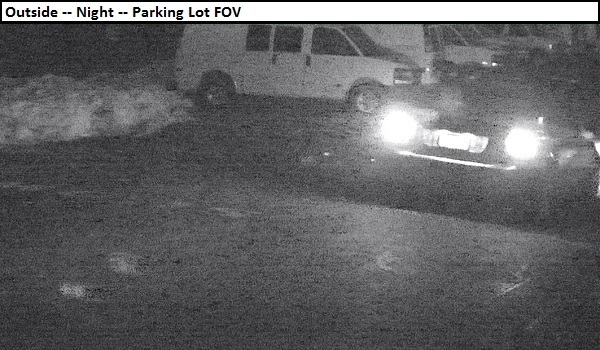 Cameras other than the GV-Hybrid 10R were once again unable to capture plates using default settings, seen in the comparison below.

We sped the shutter to 1/500s as we did in our higher speed tests. At this shutter speed, Avigilon is easily able to capture the rear plate, while Samsung remains unable.

The same was true of the front plate, as well, with headlights completely overwhelming the SNB-5004.

As mentioned earlier in the report, raising shutter speeds to 1/500s affects the overall brightness of the scene, making the entire scene darker. For example, we have compared the Avigilon's default shutter speed against 1/500s shutter speed.

We also took a look at the Samsung SNB-5004's image when changing from a default shutter speed up to 1/500s.

The following are examples of nighttime plate capture with all cameras at varying settings.

First, the Geovision GV-Hybrid 10R, successfully capturing using default settings, though little else can be seen in the scene:

Samsung 1/1000s with low gain, marginally able to read some characters, but not reliably:

Readers may also download a set of these clips, as well as daytime clips, in this 60 MB .zip file. Note that these clips will work on Windows only, as they use the Exacq embedded viewer.

Cameras were tested using default settings, unless otherwise noted. Avigilon and Samsung cameras started at 1/30s shutter speed, which was sped where necessary. Geovision shutter speed was left to automatic, no slower than 1/500s. Cameras were tested one at a time so IR illumination interference was not an issue, with the vehicle moving past at the specified speed multiple times to check capture.

Cameras were integrated to Exacq version 5.10.4.55064 without issue. The following firmware versions were used:

Take this five question LPC quiz to reinforce your understanding of the key findings and results of this report.