One challenge is that purpose built LPC cameras can get quite expensive, even an inexpensive one, like the Geovision MP LPC we tested, runs ~$1,000.

We decided to test 4 low cost integrated IR IP cameras, all $200 or less, including Dahua, Hikvision and Q-See models, to see if they could deliver effective license plate capture. 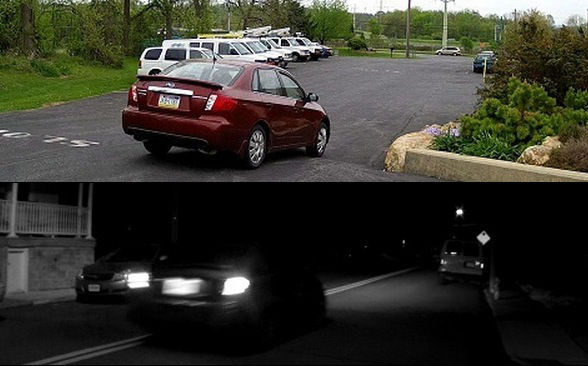 And we created image comparisons for each of the 10 runs (including various shutter speeds), that look like so:

For background on fundamental issues in capturing license plates, see:

Comparative camera pricing is as follows:

For low speed license plate capture, these low cost integrated IR cameras may work, with substantially faster shutter speeds than default. Given their low price, installing two cameras (using one for capture and one for scene overview using default settings) is possible for less than the cost of one dedicated specialized license plate capture camera (~$850 and up).

For faster speed license plate capture, 30 MPH and up, they may work, but IR pattern and range will likely be bigger issues than at slower speeds. Performance should be verified in the field before relying on them for capture.

One of the key differentiators for low cost IR cameras and their ability to successfully capture a license plate is their IR illumination patterns. Cameras with hotspots in the middle of the FOV and uneven IR patterns require faster shutter speeds to compensate for a heavily illuminated image.

We then tested the cameras performance at slow speeds, ~5-10 MPH in a commercial parking lot. Cameras were set to capture two lanes, or a ~22' HFOV.

Below is the Daytime FOV with the license plate captures of each camera at default settings with a 1/30 sec shutter speed. As seen in our street daytime testing, all cameras are able to capture the plate of the test car. 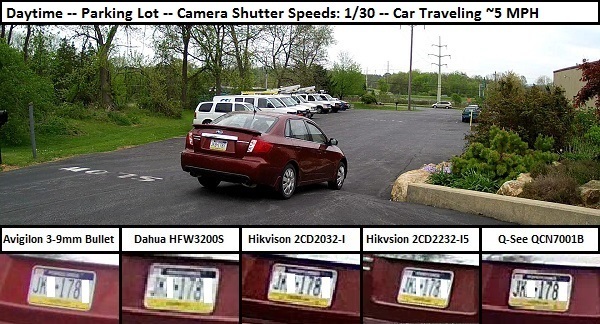 We tested in this same FOV at night, as well: 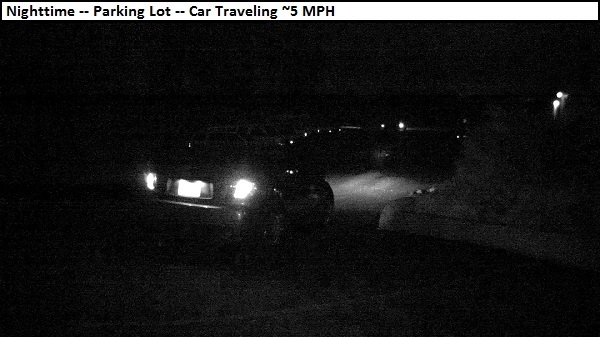 Similar to our street scene, cameras are unable to capture a license plate of a moving car even at ~5 MPH with a 1/30 second shutter speed, due to motion blur and overexposure of IR illumination on the plate.

At 1/500 second shutter speed, we get a clear image of the license plate with the Hikvision DS-2CD2032-I in this scene. All others are able to only partially grab plate characters or are washed out due to ir illumination.

With 1/1,000 shutter speeds, both Avigilon and Dahua can capture the plate, similar to our street testing.

At 1/2,000 shutter speeds, the Q-See and Hikvision DS-2CD2232-I5 are able to get a clear view of the plate when the test car is traveling ~5 MPH in our parking lot location.

We first tested daytime performance, with our test vehicle travelling about 30 MPH. The 5 cameras were left at default settings, with a 1/30 sec shutter speed. All cameras were able to successfully capture the car with minimal motion blur as well as grab a clear image of the license plate. 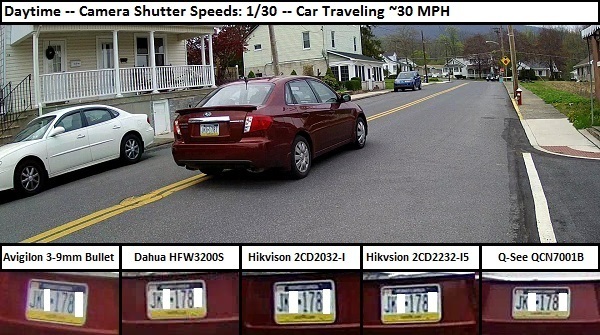 At night, the lux levels remained at ~15 lux due to an overhead streetlight directly above the cameras. Below is the general FOV used for testing. All cameras were left at default settings, with adjustments being made exclusively to shutter speeds. 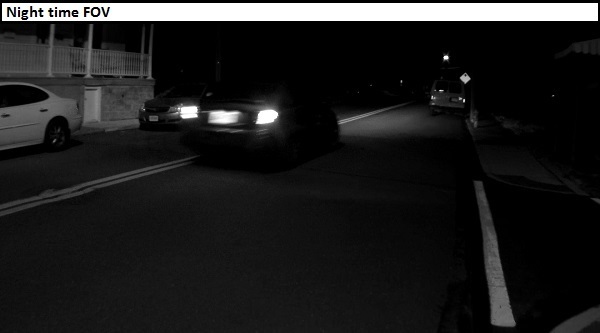 Starting at the defaults from the daytime testing, we can clearly see that no camera out of the 5 we used for testing was able to get a clear ID off the license plate.

Speeding up the shutter to 1/250 seconds, the license plate becomes less washed out and blurry. Still, no camera is able to capture a clear license plate.

At a 1/500 second shutter speed, the Avigilon and Hikvision 2032-I are able to produce a partially legible plate, while the Dahua, Hikvision 2232-I5 and Q-See are still significantly blurry and washed out.

While testing for the next fastest shutter speed, it was noted that both Hikvision cameras had 1/750 shutter speeds, which was a speed no other camera tested had available. At this speed, the Hikvision DS-2CD2032-I captured a plate clearly, while the 2232-I5 could not.

At 1/1,000 seconds shutter speeds, the Avigilon is able to get a clear read of the plate in this scene, and the Dahua 3200S captures a blurry plate, with some characters legible.

Shutter speeds 1/2,000, the Dahua and Hikvision 2232-I5 get clear reads of the license plate. However, the Q-See does not come close to capturing a plate.

The following are examples of nighttime plate capture with all cameras at varying settings.

In this video, we have compiled all of the successful passes of each camera in the parking lot scene. Note that the vehicle is traveling ~5 MPH in a ~1 lux scene.

In this example, we have footage of each camera that was able to capture the license plate at their optimal shutter speeds for this test. Cameras are shown in alphabetical order.

In this second clip, we have compiled each pass with the Q-See 7001B at every progressive shutter speed. Users will notice that the Q-See was unable to capture a license plate at any shutter speed.

Cameras were tested using default settings at 30 FPS, unless otherwise noted. All cameras started at 1/30s shutter speed, which was sped where necessary. Cameras were tested one at a time so IR illumination interference was not an issue, with the vehicle moving past at the specified speed multiple times to check capture.

Cameras were integrated to Exacqvision version 6.0.10.59050 without issue. The following firmware versions were used:

Integrator Camera Optimization Preferences on Sep 27, 2017
How do integrators make cameras 'better'? What settings or optimizations do...
License Plate Capture 4K Test on Jan 11, 2016
License plate capture is one of the most popular surveillance applications....
Vehicle Entrance Camera Selection Guide on Jul 21, 2015
When it comes to vehicle surveillance, the conversation regularly turns to...
Testing Messoa 3MP LPC Camera on Apr 02, 2015
License plate recognition has historically required specialized cameras with...
Genetec AutoVu LPR Camera Tested on Feb 23, 2015
License plate video is one of the most requested elements of video...
Comments (17) : Subscribers only. Login. or Join.