Longse is truly one of the most amazing video surveillance manufacturers in the world.

Disruptive in both senses of the term.

We met with Longse at ISC West, learning more about their practices. In this note, we examine the innovation and the spam.

Longse sells direct to anyone primarily via email; mass, global, non-stop emails. They specialize in $9 cameras, $19 NVRs, etc. Here is a recent price list, notice that almost all cameras are under $50. 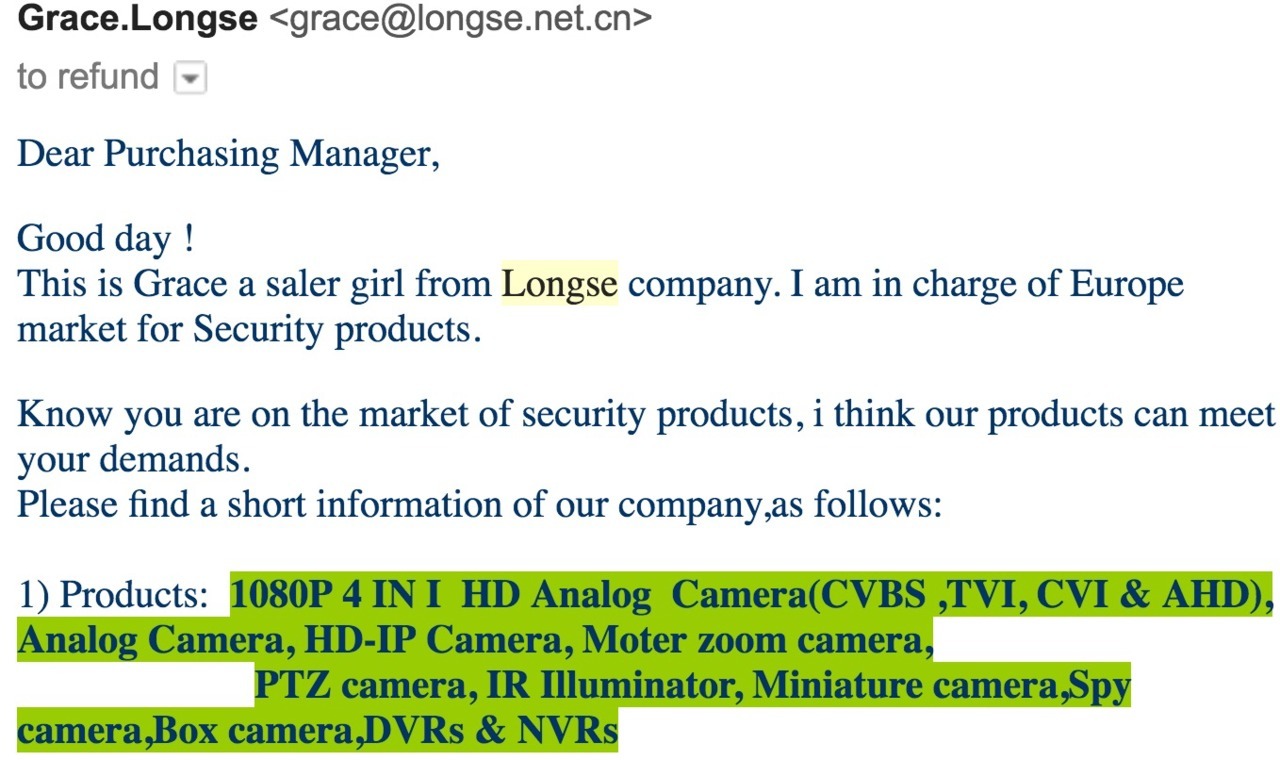 You reply, pay them and they send direct to you.

There are other Chinese companies trying this, but Longse is the 'Hikvision' of this approach.

Selling direct to end users using websites (whether the company's own or Amazon, etc.) is still controversial in the video surveillance industry.

But Longse has taken it to its ultimate conclusion. They email you, whether you want it or not, with a comparably shocking offering (IP camera $19) and they conduct the entire transaction by email. That's cutting out the middleman.

Longse told us that they have 100 sales people (all in china), including 33 dedicated just for the US. And, considering they are exhibiting all over the world, including a fairly sizeable 20 x 30 booth at ISC West, it is pretty clear that this is working.

Longse is selling millions of cameras and, sure at $2.50 $25 a piece, that is not huge for the industry in terms of revenue, but that is still a lot of cameras (Mobotix sells ~100,000 a year, by comparison).

The obvious problem is that Longse' business is built on spam. And spam is illegal both in China and in the US.

Longse explained to us that they get their emails from 'Google', emphasizing that they only pick email addresses of people from within the security industry. Factoring in the language barrier, it appears they mean that they get emails off the Internet. For example, they have our refund email address which is never used and only shown on two pages on our site.

Longse Sales Director said she did not know what the US CAN SPAM ACT was, which is ironic considering they have 33 employees targeting the US. The CAN SPAM act bars what Longse is doing.

Longse does have not permission from most of the people they email and they generally do not include any way to unsubscribe (another violation).

There is certainly value in a super low cost, direct to consumer option (though we think most professionals would be crazy to give up real local support, higher quality, validated integrations, etc.) but Longse needs to stop the mass spam. While surely they have some happy customers, the overwhelmingly rest of us who are bombarded with their unsolicited, unsubscribable emails are caught in the crossfire.

If you want to give feedback, here is Longse's President: 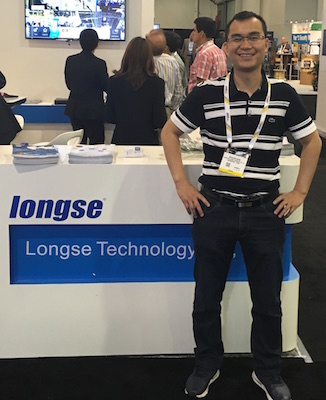 You can email Jim at: qsj@qq.com

Longse USA Profile on Nov 30, 2018
In September 2017, Longse bought and opened their USA office. As one of...
Law Breaking Longse Enters USA on Nov 22, 2017
Longse has established itself as world class, at least in spamming the...
Longse Wants To Be Your OEM on Apr 18, 2017
Hikvision, Dahua, another China rival is out for you.  The...
Dahua USA To Triple To 200 Employees on Feb 08, 2017
Months ago, Dahua USA reported 65 employees. Now, by the end of 2017, the...
Longse Rips Off Hikvision on Oct 19, 2016
Longse is on the attack, and now they are targeting Hikvision. Evidently not...
Chinese Spam Access Control Is Here on Aug 04, 2016
Notorious spammers like Longse, Cantonk, and Wodsee have flooded the video...
Hikvision's Most Innovative Competitor - LTS on Aug 01, 2016
It should sound surprising. After all, as our recent LTS test shows, LTS...
Free Longse 'ONVIF' VMS Released, Partially Stolen From Milestone, Video Insight on Jul 06, 2016
A new VMS is being offered free, no time limit and up to 64 cameras. This...
ISC West 2016 Best and Worst on Apr 07, 2016
ISC West 2016 had very strong attendance and moderately strong new products,...
Comments (15) : Members only. Login. or Join.