While locks can look the same, they may operate in significantly different ways. To make understanding them simpler, widely adopted industry standards define a range of over 20 different lock functions. Understanding them is vital in picking the locks for a job, or else security vulnerabilities or dangers to life/safety can result.

In this note, we look at these crucial codes, and several key points in working with and understanding lock functions:

The 'function' or mechanical behavior of a lock, especially a mortise or cylindrical lever lock, should be specified for an opening. These are classified into more than 20 types, using codes developed by door hardware group BHMA.

The relevant standard defining locks functions depends on the type of lock it is:

Using the standard function definitions, bathroom locks include the provision to lock from the inside, preserving the privacy of occupants. However, this same feature is applied to storage closets, simply due to the potential of accidentally locking the door shut and preventing access from the outside, trapping children or potentially incapacitated people inside.

The integration and behavior of mechanical locksets are important to preserve in electronic access, per Building Occupancy Codes and Access Control Life/Safety Codes. Failing to understand how underlying hardware operates may result in the improper/illegal use of electronic hardware.

For example, if a mortise lock includes a separate deadbolt, an accompanying electric strike may need to be upsized to include more that one latch, or more than one strike may be required. Likewise, if a lock is an E2161/F18 Deadlock function, it is kept locked unless key unlocked from the outside, and simply using a maglock is not enough to release the door when access unlocks it, potentially killing or injure people trying to escape.

These properties of locks are identified by codes, and there are over 20 different functions available.

Before codes were implemented, functions were defined via common labels like 'Passage Functions, or 'Privacy Locks'. However regional and manufacturer variations of those labels are common, and simply identifying these locks by common labels does not guarantee the exact function will be ordered, so using the alphanumeric code is important for clarity.

The ANSI/BHMA Function codes are: 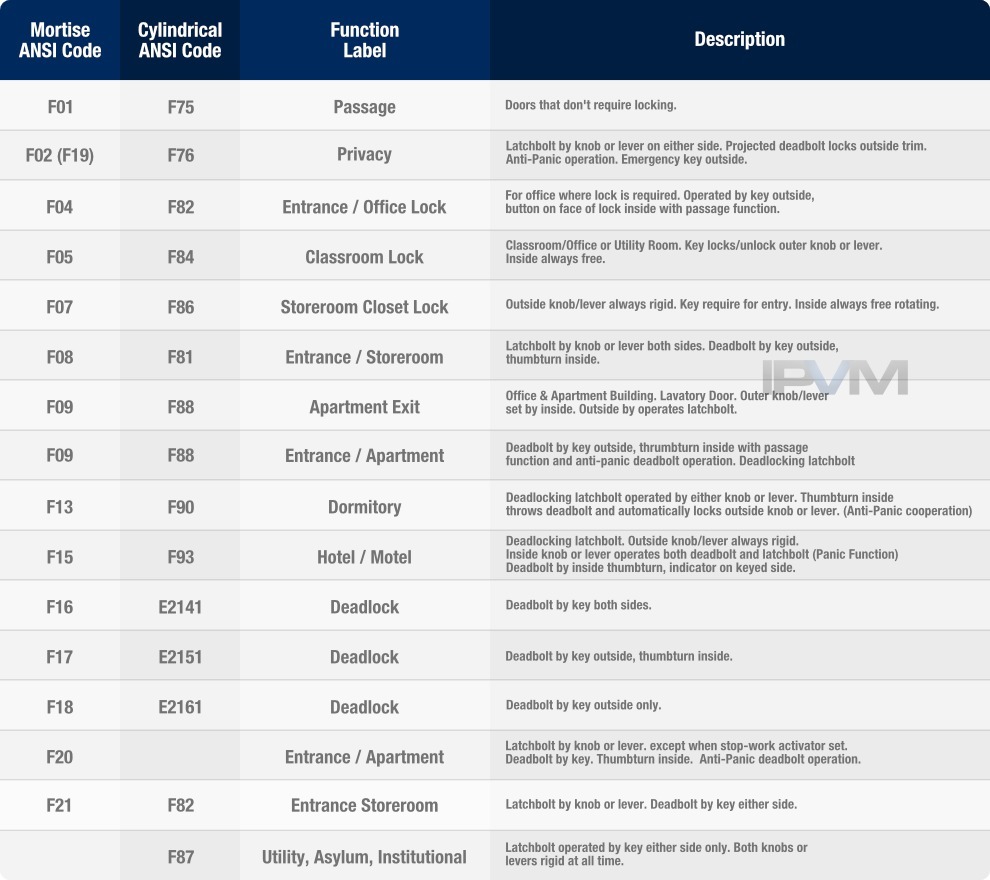 These are three of the most common applications, and their corresponding lock functions, for security integrators:

Other applications, for example, a medical storage closet, F86 is a likely choice because the door is locked all the time and can only be opened by a key. The door automatically locks when the door is shut, which is ideal for securing a closet filled with valuable items.  Code F86 also specifies a cylindrical lockset, although if the door was prepped for a mortise lockset, code F07 would provide the same features.

Not All Functions Code Compliant

Certain occupancies outlaw some functions - E2141/F16 "Double Keyed Deadbolt" cannot be used in most group occupancies, while others strictly define required use of others - F93/F15 only on Hotel/Motel doors.

Code F84/F05 is informally called 'Classroom Function', as they are designed to be installed in schools as a potential protection against active shooters or intruders.

These locks always allow occupants out of a classroom regardless if the door is locked or not. However, in order to lock the door, a key must be used on the outside of the room. This orientation has caused some concern in the wake of school shootings because they expose the teacher or class to danger in order to lock the door. Of note, doors lockable from the inside are F82/F04 Office Function locks.

This explains why some products marketed as 'classroom locks' do not specify F84/F05 code compliance because they can be locked from inside the class. While this potentially may be a safer function, it does not meet the formal 'Classroom Function' definition, and special attention is needed to clarify actual operation.

Most commercial-grade hardware makes finding lock function easy - generally, this is listed on cutsheets, and different product SKUs have different functions, even if the base hardware series is the same. Take this example from Schlage:

Most residential and light-grade commercial hardware does not specify any function code, and is simply sold as an 'office lock' or 'bathroom lock'. These products are configured in only the most common functions and may not be compliant with codes or specifications as a result.

[Note: This guide was originally published in 2013, but substantially expanded and updated in 2018.]