This 18-page guide provides guidance and statistics about integrator laptop use. 150 integrators explained to IPVM in detail about their laptops, including:

We answer and elaborate on each of these questions straight from integrator members inside.

In terms of brand, Dell laptops are the clear favorite, with more than 40% of all mentions: 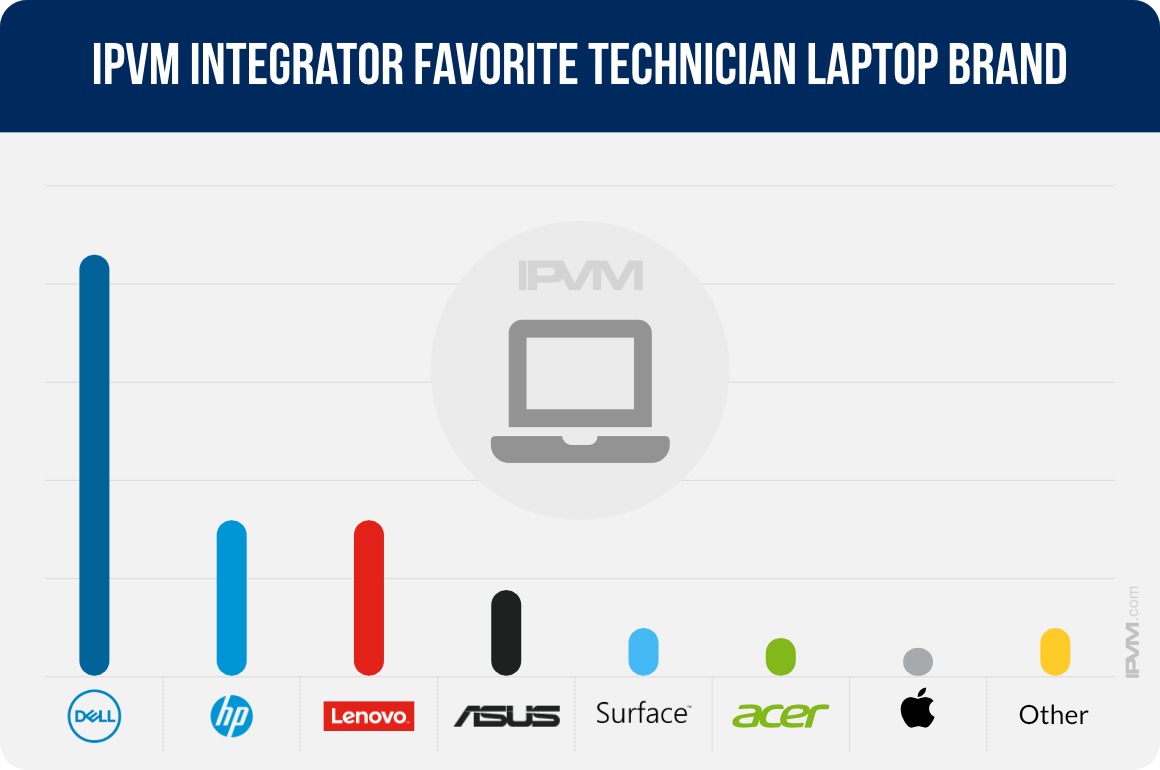 In second place, HP and Lenovo were tied, breakdown below:

The two main differences between general laptop brand shipments and security integrators were that Dell was much stronger and Apple much weaker.

Texas based Dell held the largest marketshare for integrators, and their answers evidenced good support, easy service, and good reliability as key. Several answers also mentioned they also are Dell-resellers to their own customers, and use that relationship as the basis for their own business:

Tied for co-second place is HP. Among the strengths mentioned was good reliability and ready inventory as needed. While overall sentiment was weaker than for Dell, many of the same relative strengths in support and business pricing were mentioned:

And China's Lenovo tied for second. Despite past problems with factory installed spyware, the brand's ThinkPad line remains a popular pick with origins from legacy IBM ownership days. While most mentions reflected low pricing and strong business partner programs rather than purely technological differences, the brand's marketshare appears to remain strong especially among integrators:

Despite being one of the world's largest computer makers, Apple only rated a handful of mentions among security installers. The big gap is likely a result of factors like high relative cost, and limited compatibility of Mac OS with common security and VMS platforms, a fact noted in VMS Software Compatible MAC OS:

In terms of processors, the most common core used i5 chips, although the more powerful i7 class followed a close second: 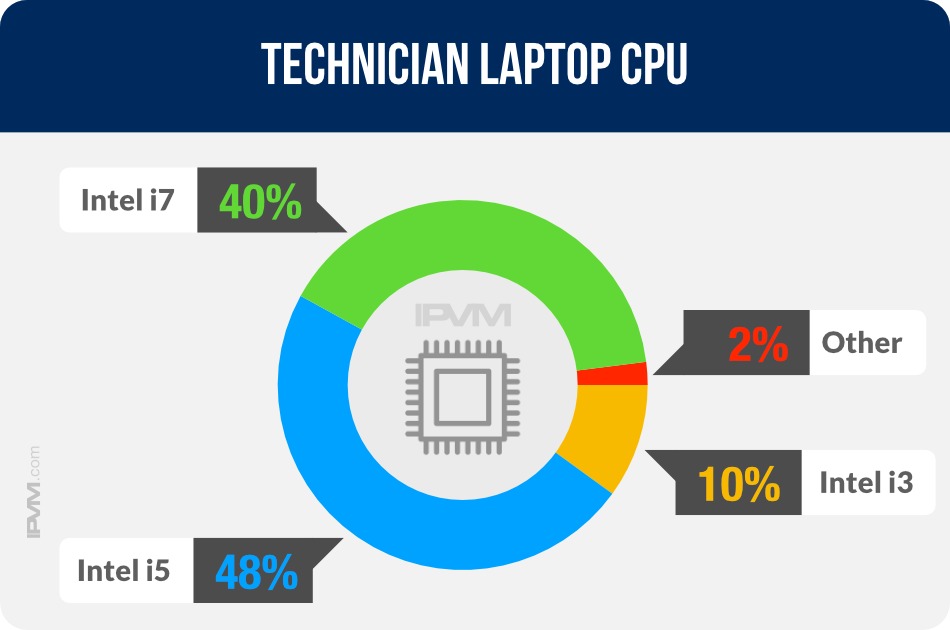 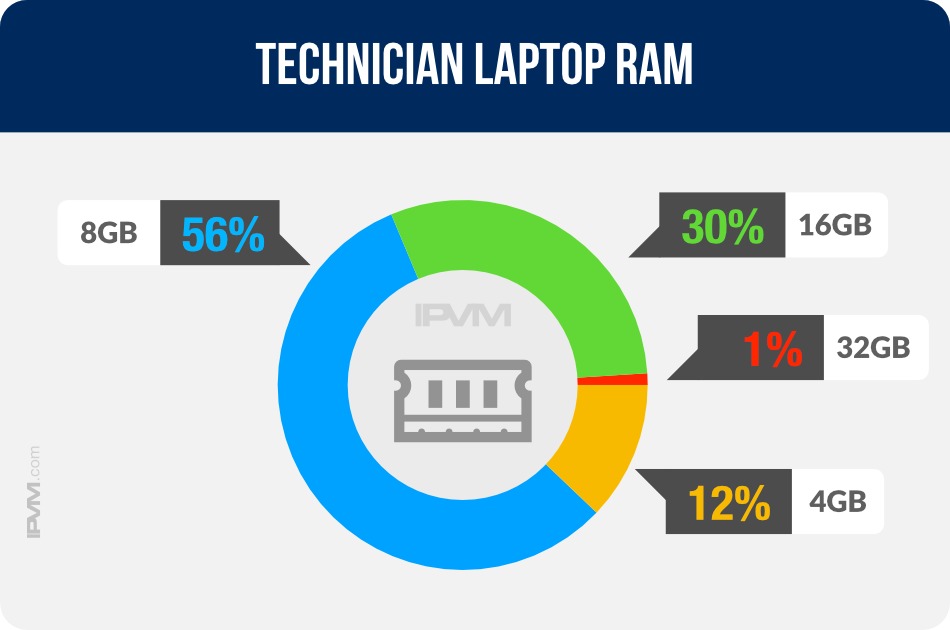 And especially given the multi-megapixel resolutions of individual cameras, like popular 4MP and 4K Models, gauging the most common screen resolution shows 1080p monitors to fit the majority of integrator buying specs: 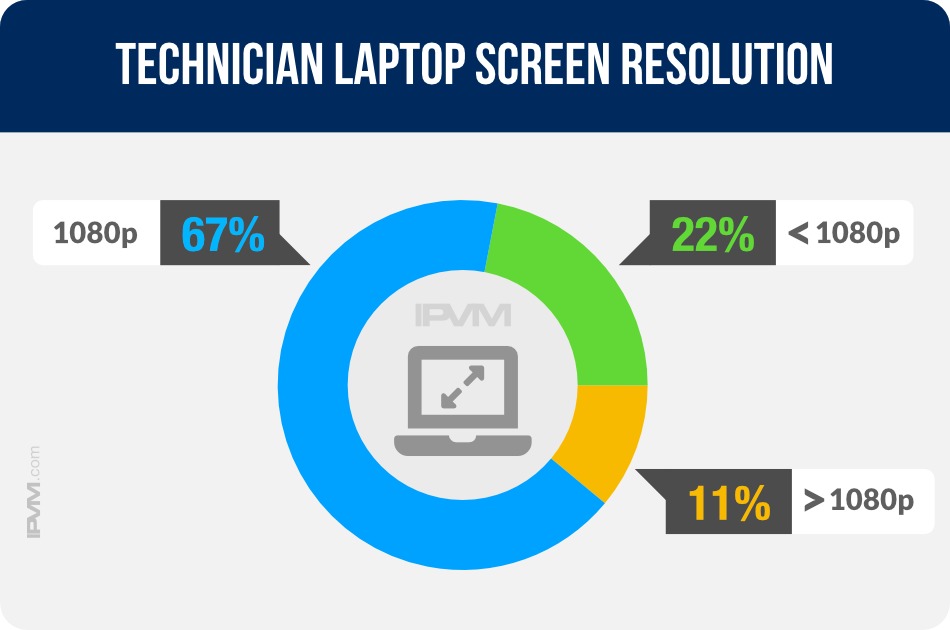 In fact, many integrator color responses of an i5 processor, 8 GB RAM, and ~1080p screen resolution was exactly the same as the most common specifications cited:

However, especially in answers citing less demanding specs, the common theme of 'tech laptops do not need to be powerful' because the work techs typically perform does not require aggressive specs:

These comments often mention that more powerful or resource intensive tasks are not normally performed in the field by techs but by other specialized staff remotely or with onsite servers/workstations.

But some integrators make it clear that overbuilding tech laptops is not a major concern because undersizing machines and potentially building time delays into projects due to tasks too tough for weaker laptops to handle is a bigger risk.  In many cases, stronger processors and more RAM was common, but resolutions tended to stay around 1080p:

While still an overall minority, tablet use versus laptops was reported by several as an interesting option with many citing current or future plans to trial tablets with techs:

The overall performance differences were mentioned as minor compared to the advantages of tablets being lightweight, easy use on a ladder, and with overall good battery life. Furthermore, outfitting a tablet with a rugged case or sleeve is easier and less costly than ruggedizing a laptop.

We asked 'What improvements or changes to your technician's laptops would be most valuable? Why?', and four common answers emerged:

In the sections below, integrators provide color comments explaining these choices and why they are important for security work:

The most common improvement mentioned was simply better, longer internal battery life so that time away from an outlet or between charges in the field is longer:

Secondly, answers mentioning the major performance improvements by replacing platter style HDDs with SSDs makes them an upgrade worth getting:

One of the most requested improvements, if not widely available, are ruggedized housings and designs for technician laptops often receiving damage in the field through drops, knocks, water, and dust:

One of the major drawbacks of existing 'rugged' offerings was their high price compared to non-ruggedized counterparts.

Interestingly, those citing ruggedness often specifically mentioned Panasonic's Toughbook line. Despite Panasonic not registering as a significant 'favorite' brand, many have the overall perception that Toughbook laptops are benchmark examples of 'ruggedized', although high pricing keeps the offering out of reach for many to use:

Another key request was for tech laptops to buck the trend of coming with less ports and actually add them back and to even expand them with new types like PoE-out ethernet ports:

Several mentioned the security systems techs service commonly still use DB-9 Serial/Comm Ports and USB Ports for communication, and that they are forced to use a variety of adapters or hub to make up the ports their computers frequently lack.

We asked integrators 'How often does your company replace technician laptops? Why?' to gather responses how long tech laptops are in service before factors like unexpected repairs or decreased reliability become a factor: 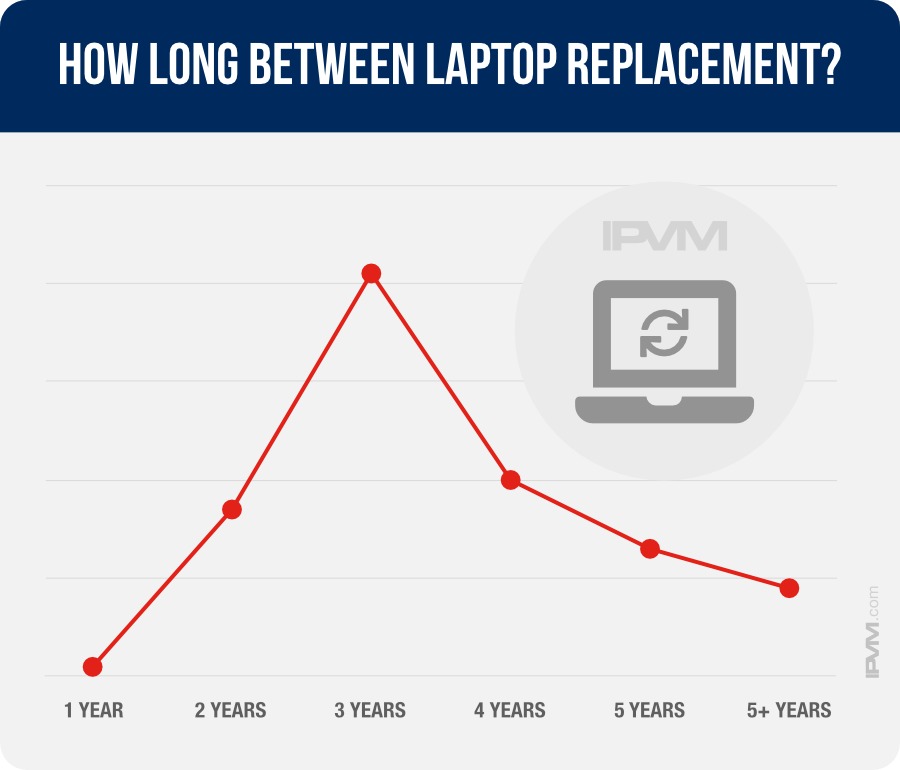 Every Three to Five Years

The most common replacement range mentioned was 'every 3 to 5 years' with about 75% of all votes falling within that lifespan. Many responses cited the rigors of field use, coupled with the relentless progression of operating systems, causes most laptops to be replace in this range:

In relatively few cases were underlying security products forcing changes (e.g.: Avigilon's Appearance Search was cited), but most mentioned reasonable expectancy do not often extend beyond this time.

When a specific interval was not mentioned, laptop replacement commonly was cited 'only when needed' in the absence of a more formally recognized interval:

Passed Down To Junior Employees

Interestingly, several mentioned that when a laptop is pulled from technician use, it often is refurbished and given to other employees as possible:

In many cases, aged laptops are not immediately trashed but reallocated to other employees with less intensive jobs.

Finally, we asked integrators 'Do technicians have local admin rights to install software themselves? Why or why not?' to gauge just how much administration and system privilege techs are typically allowed on their PCs:

For the majority answering 'Yes', the rationale was typically cited as techs are trustworthy and proficient to responsibly use the permissions to be efficient and effective:

However, while those answering 'No' were less common, the hesitation usually was because other integrator staff/ IT employees were entrusted to manage computers and installed software and maintain network security of devices even if they are primarily used in the field: