The 4MP Shootout - Dahua vs Hikvision

This is being driven by new sensors from OmniVision that deliver almost twice the pixel count of 1080p at the same 16:9 aspect ratio. These sensors also include true WDR. They are completely unrelated to the 4MP effort from ACTi from a few years ago.

The diagram below shows the difference in pixel count: 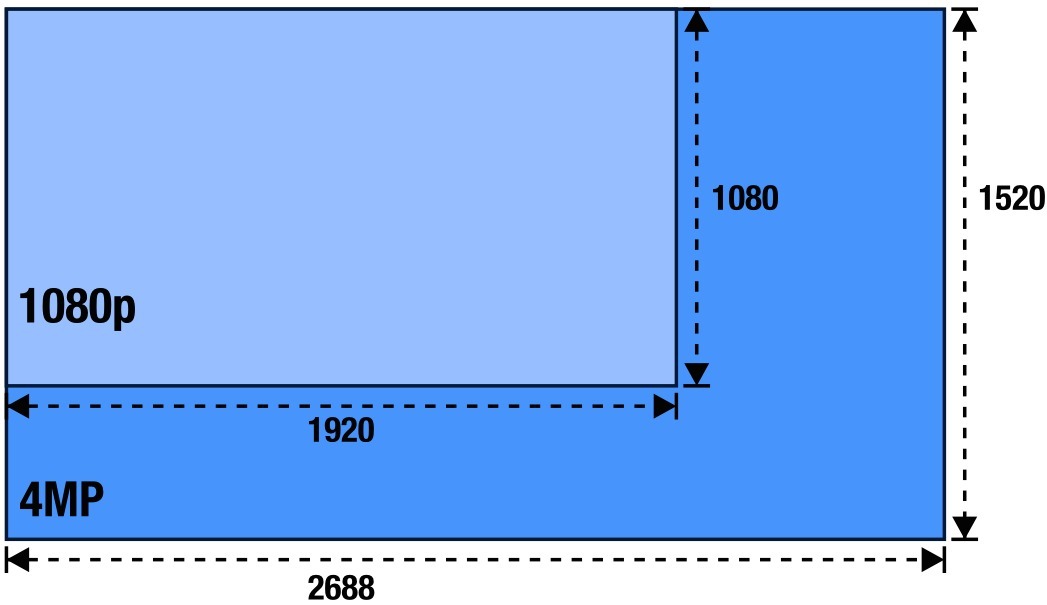 The two companies most aggressively pushing these 4MP cameras are the Chinese mega-manufacturers, Dahua and Hikvision. Not surprisingly, they are offering these cameras at extremely low prices - 4MP, integrated IR, true WDR fixed focal domes for under $300.

With better WDR performance and improved details in wider scenes at roughly the same cost of low cost 1080p, 4MP cameras have the potential to replace a significant amount of 1080p cameras.

On the other hand, the incremental benefits here show that we are reaching a point where the average indoor area will not see much of a practical difference with increased pixel count.

Pricing for 4MP models is moderately higher than 1080p or 3MP equivalents, though both Dahua and Hikvision's 4MP models have an estimated street price under $200.

Pricing for the cameras in this test are as follows:

Physically, Hikvision and Dahua's 4MP models are nearly identical to low resolution models, with the same housings and IR illuminator construction. We look at the physical construction of each in this video:

We began testing in our indoor conference room scene, seen below: 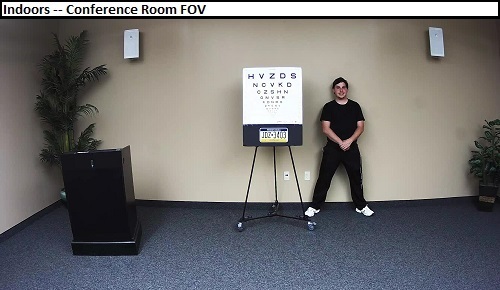 In full light, the 4MP models are visually similar to the 1080p equivalents, with little practical gain in details of our subject, as PPF is high in both resolutions.

Finer lines on our test chart are moderately more legible in the 4MP models. 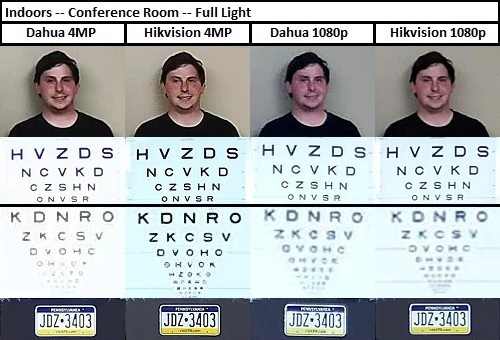 In low light, the Hikvision 4MP model washes out the subject and test chart slightly. The Dahua models perform similarly, with text slightly more legible in the 4MP model. 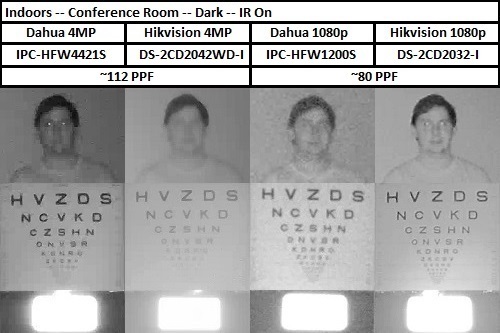 To better show differences in resolution, we tested the cameras in this wider FOV, seen below. In this scene, PPF drops to ~50 in the 4MP models and ~36 in 1080p. 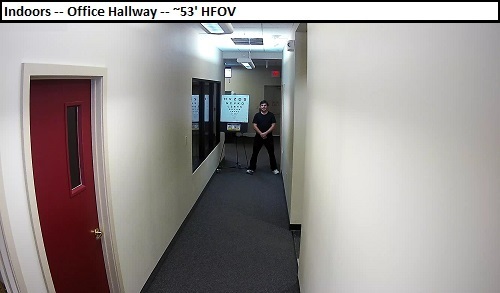 The 4MP provide moderately better facial details of our subject, and 1-2 more legible lines on the test chart in this scene. 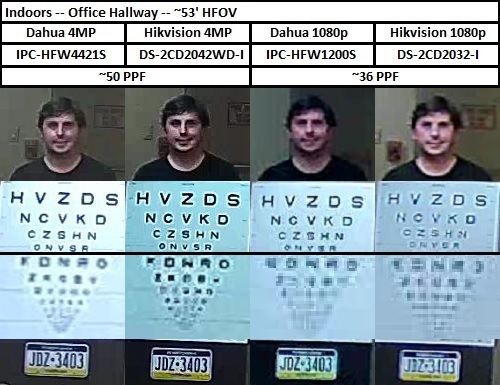 Next, we tested dynamic range in a warehouse scene with open overhead door, seen below: 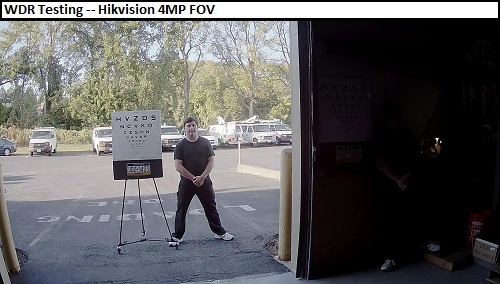 Both cameras include true multi-exposure WDR, in addition to digital enhancement, shown as a 0-100 adjustment in the camera's web interface, with a default of "50."

Increasing the WDR setting to 100 increases performance of both cameras, most noticeably in the Hikvision 4MP model. However, increasing this setting to max risks some overexposure against strong backlight, and increases visible noise in the dark portion of the scene, both shown below: 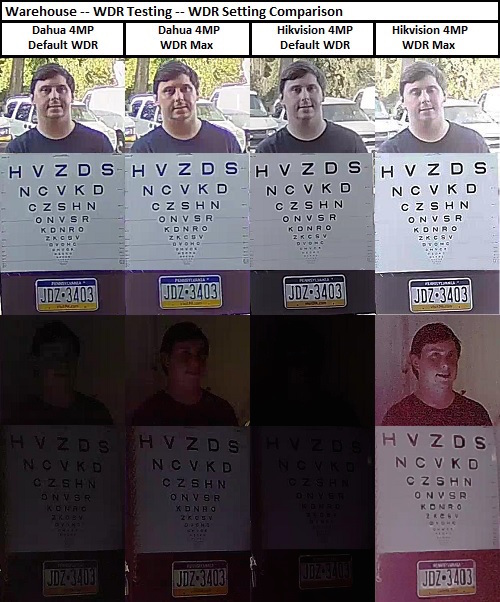 Using these increased WDR settings, the Hikvision 4MP camera provides the best dynamic range of any camera in our test, with subject details easily visible both against backlight and in the dark area beside the door. The Dahua 4MP provides similar details against backlight, but is moderately worse in dim areas. 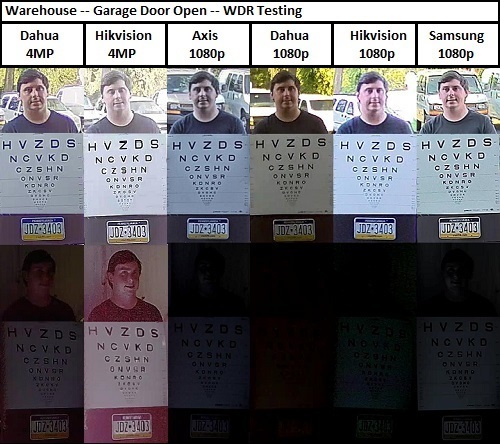 4MP bitrates in full light are higher than their 1080p counterparts. The Dahua 4MP model consumed about 100% more bandwidth than the 1080p HFW1200S, while the Hikvision 4MP was about 25% higher.

In low light, however, Dahua's 4MP bitrate is only slightly higher than the 1080p model, and Hikvision's 4MP camera consumed only about .5 Mb/s, lowest of all cameras in our test. The Hikvision DS-2CD2032-I's low light bitrates are notoriously high, hitting the camera's cap of 12 Mb/s, as it has in past tests. 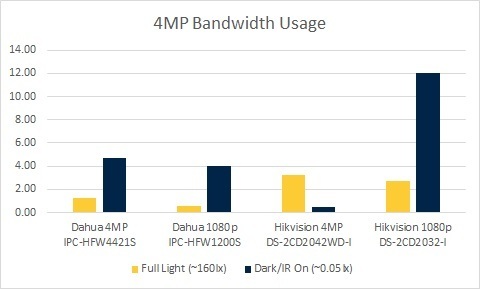 The following camera settings were standardized:

Aside from these changes, cameras were tested using default settings unless otherwise specified.

The following versions were used in this test:

Integrator Laptop Guide on Oct 16, 2018
This 18-page guide provides guidance and statistics about integrator laptop...
Hikvision H.265+ Bullet Tested (2035) on Jul 24, 2017
Continuing our tests of Hikvision's new low cost Value Plus line, we bought...
Hikvision 8MP Low-Cost Camera Tested on Jul 14, 2017
Hikvision has introduced their latest generation of low-cost Value Plus...
Hikvision Removing Auto 'Phone Home' on Mar 24, 2017
Facing pressure over their cameras auto phoning home and their Chinese...
10 Manufacturer Cyber Security Compared on Dec 13, 2016
With the rise in exploits and growing awareness of cyber security issues in...
Longse vs Dahua and Hikvision Tested on Nov 16, 2016
For many, even $100 cameras are too expensive. That is where spam king Longse...
Hikvision 'Phone Home' Raises Security Fears on Nov 10, 2016
The escalating attention towards Hikvision's China government ownership and...
Dahua Smart H.264+ Tested on Aug 17, 2016
The smart codec trend continues, with Dahua adding Smart H.264+ to many of...
IP Camera Long Distance Ethernet Test on Aug 12, 2016
Many often ask about running Ethernet beyond its standard distance of 100...
Hikvision Cloud Service (Ezviz / HikConnect) Tested on Aug 05, 2016
Hikvision has built out cloud services for their cameras / products,...
Hikvision vs Dahua High-End 4MP Cameras Test on Jun 27, 2016
4MP models hit with a splash last year, offering increased resolution and...
Axis Lowest Cost 1080p Camera (M3045-V) Tested on Jun 13, 2016
We bought the new 1080p Axis M3045-V and tested it against Hikvision and...
Axis New Lowest Cost Dome M3044-V Tested on Jun 10, 2016
It has been 4 long years since Axis launched new low cost domes. In that...
ISC West 2016 Best and Worst on Apr 07, 2016
ISC West 2016 had very strong attendance and moderately strong new products,...
The Super Low Light Shootout 2016 on Mar 28, 2016
How good are surveillance cameras in low light? With the advances in...
FLIR IP Cameras Tested vs Hikvision on Feb 19, 2016
Hikvision is well known for being a low cost leader, but our recent Camera...
Hikvision H.264+ Tested on Feb 10, 2016
Is 'regular' H.264 soon to be a thing of the past? Last year, Axis started...
Hikvision Ezviz Tested on Dec 28, 2015
Last month, Hikvision Launched Direct End User Sales with their Ezviz line,...
Security Cameras 2016 Review on Dec 23, 2015
In 10 minutes, this note explains the current state of security /...
World's Biggest Video Surveillance Market (Shenzhen's Pacific Security and Protection Market) on Nov 25, 2015
There is literally nothing like it in the Western world. It is 6 story...
The Biggest Surprises in the Video Surveillance Industry 2015 on Nov 13, 2015
100+ integrators told us what the biggest surprise in the video surveillance...
TVI Launches 3MP, 4MP, 5MP Analog Cameras on Oct 29, 2015
One key barrier to HD analog is about to fall. This is a live report from...
Dahua Finally Has A US Distributor on Oct 08, 2015
Finally. Billion dollar Dahua is the 'smaller' of the two mega Chinese...
Comments (11) : Subscribers only. Login. or Join.