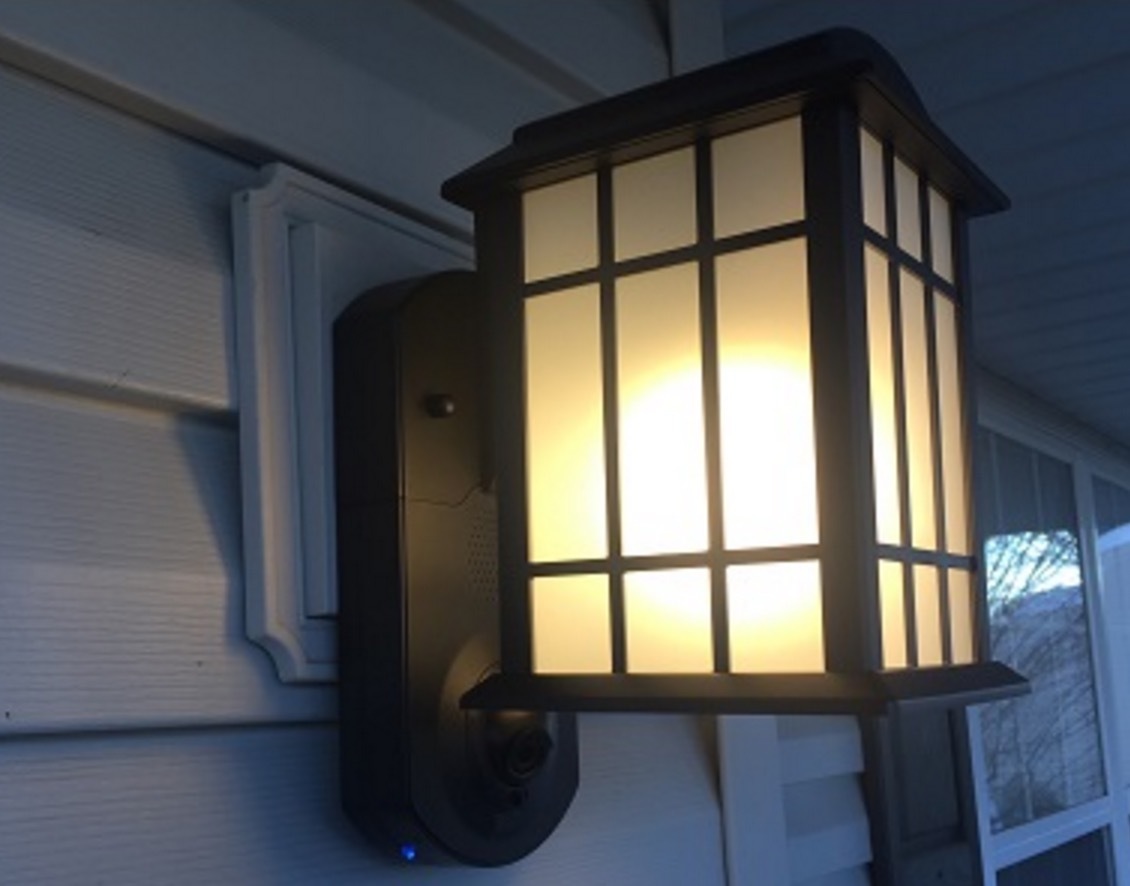 A new device, named Kuna, "aims to prevent break-ins before they happen!"

We bought one and tested it out, examining the following key elements:

The most important strength of Kuna was its motion detection accuracy. In our testing, it was very reliable / accurate in detecting visitors approaching the door. Indeed, it essentially eliminated the need for a doorbell as Kuna would automatically 'ring' the user's phone when a visitor appeared.

Related, the audio and interaction with visitors via app worked well and clearly, making it easy to handle visitors from anywhere without going to the door.

Thirdly, installation was relatively simple, even for a non-technical user, including working with existing lamp power.

However, a number of important downsides exist:

Kuna is definitely interesting and, in some ways, is a better 'doorbell' than Ring (see Ring Video Doorbell Tested) but the live and recorded video issues are real concerns.

Given how it works, it might some 'prevent break-ins' before they happen but, of course, it will be limited to the front door.

The Kuna connects to existing power from the traditional outdoor light that is being replaced. The top looks like a traditional outdoor sconce while the bottom of the back-plate houses the camera, motion detection PIR, and a blue LED status light that can be turned off. The speaker and microphone are located on the middle of the back-plate, behind the light.  The 720p camera has a 116 degree FOV, and a small slide lock will secure the lens in position after you aim it at your desired location.

The video below overviews the physical features:

We tested the Kuna Crasftsman, this is one of six models in their new security system lineup.  The Kuna comes in three style designs; Craftsman, Traditional, and Contemporary.   These models provide all the same features with the only difference being that lamp shade on the sconces vary in design. 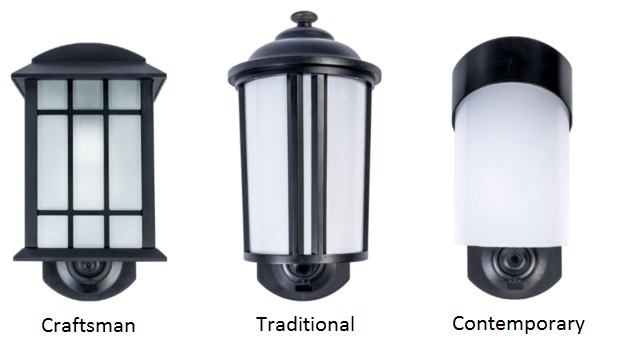 They also offer a partner product, the Companion, which is a lower price, camera-less model designed to match the appearance of your Kuna sans camera.  This is most commonly used where you have lights flanking your entrance and want matching lights, but do not need two cameras or the associated cost.

This light is designed to replace your existing outdoor light and estimates a fifteen minute installation time.  It took me about fifteen minutes just to complete the physical installation, and then another 10 to set it up and I estimate the companion would take 15 minutes total.  It was rather straight forward; replace the old light using the same mounting hardware and existing power. There was no need for shimming or any other work-arounds, although it does has a larger foot print than most existing lights which can be an issue.

One problem that is mentioned in several customer reviews of the product is the size of the back-plate/mounting surface.  In the pictures below you can see how the footprint of the light against the vinyl mounting block on my house looks like an afterthought.  This won't be an issue on a flush mount applications but in our case (and many others) the question is raised: Do you begin an entirely new project of measuring, color matching, uninstalling, reinstalling or keep it with the imperfection? 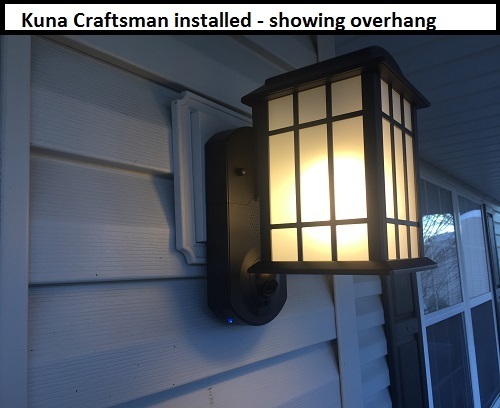 The Kuna can be purchased online for ~$180, and the Companion [link no longer available] model is ~$100.  They also have three different subscription plans that range from $5/month - $30/month. 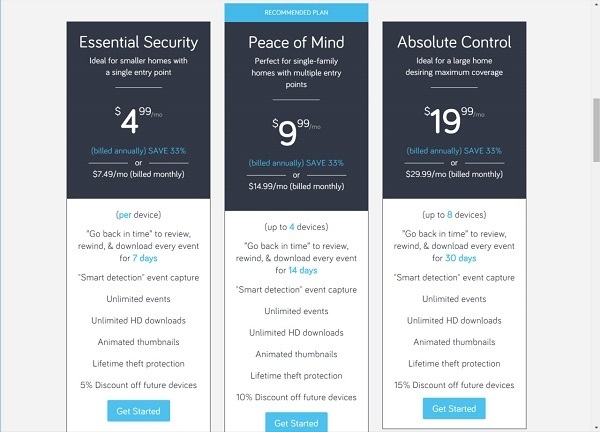 While it is not mentioned the subscription plan page, you can continue to use most of the features without subscribing.  This is explained in more detail in one of their blogs [link no longer available].

When a push notification is received you can immediately view the live stream, however you will have to wait several minutes to view the recorded video. It may cause some anxiety when an alert is received, the live view shows nothing in view that should have triggered motion detection and you can not immediately view the recording.  Again, the camera only falsely triggered motion detection one time, but this is the result when you check the live stream and do not see anything that would have triggered it, the next logical step is to check the recorded event.  When you do that you will see the error below. 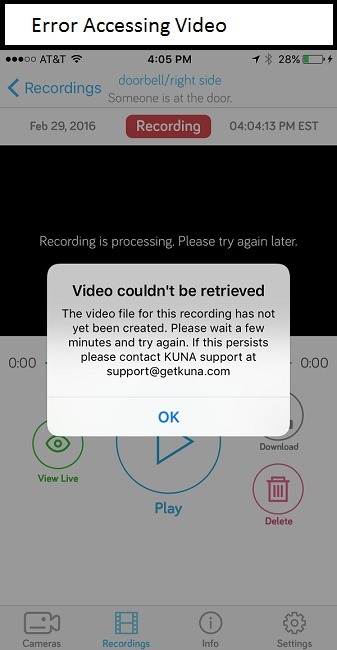 The next technical issue encountered was a consistent problem with viewing a clear live stream. To verify good signal strength a laptop was used to run a WiFi discovery and analysis tool that reported a strong signal of -38 dBm where the light is installed.  The router is only about 20 ft from the Kuna. In an effort to see if the problem would stop we turned off all other network devices to no avail.  All other devices on the test network were functioning properly during this five day test.  The problem is isolated to the Kuna. The video below illustrates the problem:

Kuna does not provide telephone support nor live chat. We attempted to email them, but received another error, shown below:

On the third day we were able to successfully use their contact form, and received an email back within 24 hrs (3 days from our initial attempt). Their troubleshooting was solely focused on our test network and ISP rather than the Kuna. We obliged every request made by their support team and still haven't seen improvement in the performance/functionality of Kuna. [Test Network Speed Test Results: Wired: ping 21 ms down 90 mbps up 18 mbps WiFi: ping 21 ms down 42 mbps up 18 mbps  (standing next to the Kuna)]

The light was able to detect motion consistently at 20 ft during testing with sensitivity set to 95, the default value. It only had one false detection during five days of testing, and after changing the setting to 70 no false alerts were experience.

With the problems mentioned above there still were some features that worked well, like the PIR motion detection even in a busy FOV.  Since this is a consumer product with mostly residential applications we installed this at a home. In the picture below you can see the covered porch, walkway, yard, sidewalk, and street. The camera did not detect street traffic or pedestrian traffic on the sidewalk.  It consistently detects motion at ~20ft, which only included cars pulling into the driveway and people walking up to the front door. You can also see bushes at the edge of the porch, even on a windy day (22 mph winds) motion detection only falsely triggered once. The sensitivity was set to 95 when it falsely triggered, we then tuned it to 70 and have not seen it falsely trigger since. The Kuna includes 2 way audio, which from the home screen allows you to listen and then click on the mic icon to speak to visitors. The camera is mounted 50' from my mailbox and audio was clear in both directions at that distance. 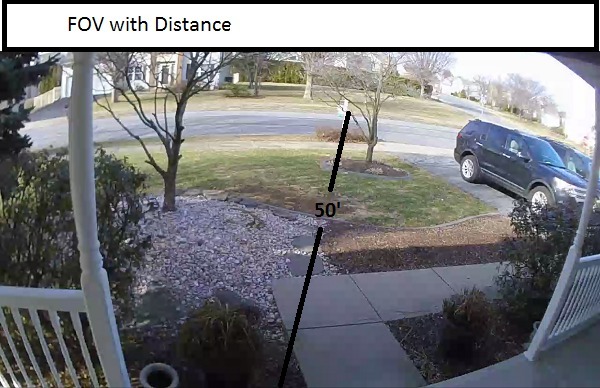 It also comes with 3 prerecorded messages in an adult male voice.  If you need to scare off a possible intruder the security system also has a built in alert with a 100 decibel alarm which sounds along with the light flashing.  The lights in the Kuna can controlled with the mobile app, manually turning them on/off with a tap of the screen or you can schedule the lights to come on at a certain time and turn off at a certain time, a good feature on a light that requires constant power for the camera, WiFi, PIR, Bluetooth, and other technologies that remain on when you want to turn your outside lights off.

The mobile app is the only interface with the Kuna light, and in the video below we walk through the features:

Settings and Configuration via the Mobile App

This video shows the information found and key settings within the mobile app:

Directory of 70+ VSaaS / Cloud Video Surveillance Providers on May 17, 2021
This directory provides a list of VSaaS / cloud video surveillance providers...
Directory Of Consumer Security Cameras on Aug 16, 2017
The consumer camera segment continues to grow, with new startups and models...
Ring Floodlight Cam Tested on Apr 20, 2017
Ring has released their latest entry, the Floodlight Cam, calling it the...
Camera Doorbell Startup Ring Now With ~$100 Million Funding on Mar 16, 2016
Smart doorbell startup Ring has raised an additional USD$61M in...
Comments (10) : Subscribers only. Login. or Join.