While the surveillance market is crowded, the intercom space is relatively sparse. In this note, we survey manufacturers specializing in enterprise intercoms including Commend, Stentofon and Aiphone, contrasting their various strengths and weaknesses.

Integration with other systems is done via relay outputs on intercom stations or through Input/Output cards/ external modules. Specific integrations vary according to the system involved, but at a minimum the four functions listed above are available in the systems described in the following section:

Each system mentioned below is an IP-based intercom system, ideal for use in enterprise environments where a well developed LAN is present. Even though wireless intercom systems are available, privacy regulations and interference from external sources exempt them from being considered in every application.

In general, the product series mentioned below are designed for general purpose and if specialty applications or integrations are desired,the information may change. 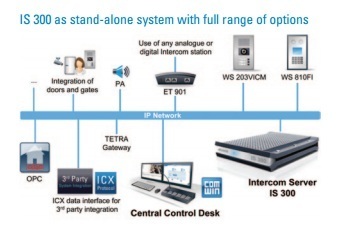 For multi-site functionality, Commend sells additional management servers that type in 'stand alone' IS implementations, as show to the right:

Stentofon offers the greatest capacity, by default, with over 500 stations supported from a single unit. This may include IP stations located remotely from, but still network connected to, the primary AlphaCom server. The cost of migrating existing analog terminals into Stentofon's offering should be carefully considered, as no external analog encoder exists. Different, more expensive, AlphaCom servers must be specified based on total number of analog stations to retrofit existing installations.

Here is a video overview of Aiphone's line.

Aiphone does not support full-scale network addressing. The IS Series is limited to 32 IP addressed units, while the total system population supports tens of thousands of analog stations designed to use CAT5/5e/6 cabling for transmission. However, the IS series supports widespread use of video at the intercom terminals.

Because Commend and Stentofon are dealer-only product lines, system pricing is difficult to accurately estimate. Addiitonally, both lines feature a variety of integration options that the Aiphone line does not tightly support. However, the Aiphone line is considerably less expensive than the dealer lines, and does not include added expenses like product licenses.

Commend: While Commend is generally the most costly of the three options, it includes the tightest integration options:

Commend is a good choice when the intercom system is intended to be a part of a converged, multi-system platform. Commend's pricing structure is complicated, and determining exact project pricing requires a deep understanding of the company's product and upgrade plans.

Stentofon: The company's pricing is close or fractionally beneath Commend. Stentofon has focused on audio quality and product development rather than tight integration. In general, Stentofon focuses on design features like redundancy and rugged component design. Stentofon is competitive, or fractionally less expensive than Commend, although final dealer discount varies. Stentofon is a good choice when high-quality audio is desired.

Aiphone: Far and away, Aiphone is the least expensive of the three options. In some cases, pricing is as much as 50% less than rivals plus the IS series does not require the cost of licensing compared to the other options. However, integration into other systems is much more difficult than the other two options. Aiphone is a good choice when a simple, minimally integrated intercom system is desired.