How to Read Blueprints For Security Projects

Floorplans can be large, detailed and intimidating to the inexperienced.

Understanding blueprints can be the difference between bidding the project accurately, losing a job or worse, or winning it by omitting critical costs. It can also result in avoiding or making painful errors during installation.

In this note, we introduce the way plans are structured, identify the key details impacting surveillance designs, and review where in floorplans the most important data is displayed.

In the sections below, we review the six keys for making best use of blueprints for security designs:

At the end of the training is a quiz to reinforce the lessons taught.

A set of prints is usually reproduced on big sheets of paper, on large format plotters and bound together into project sets. The actual size of the and number of pages in a floorplan set vary, as we introduce in the video below:

The next step in using blueprints is understanding which aspect of the building the sheet details. The drawing sheet number will identify which subsystem or part of the building the drawing details illustrate. While the nomenclature and format of drawing plans vary, the widest adopted standard (US National CAD Standard) has a published format for drawing and plan numbers, usually a 4-5 digit code found in the drawing sheet's title block, ie:

Another standard that sometimes applies to drawing plans is the AIA Contract Document Numbering System that might describe certain contracted or standard designs of building features like cleanrooms, hazardous material handling, or even refrigerated storage.

In any case, there are a few sheets that out of the entire set that make the difference.

Someone interested in only the security systems will not need to be concerned with every drawing in the plan set, and can typically gather most of the needed info from: 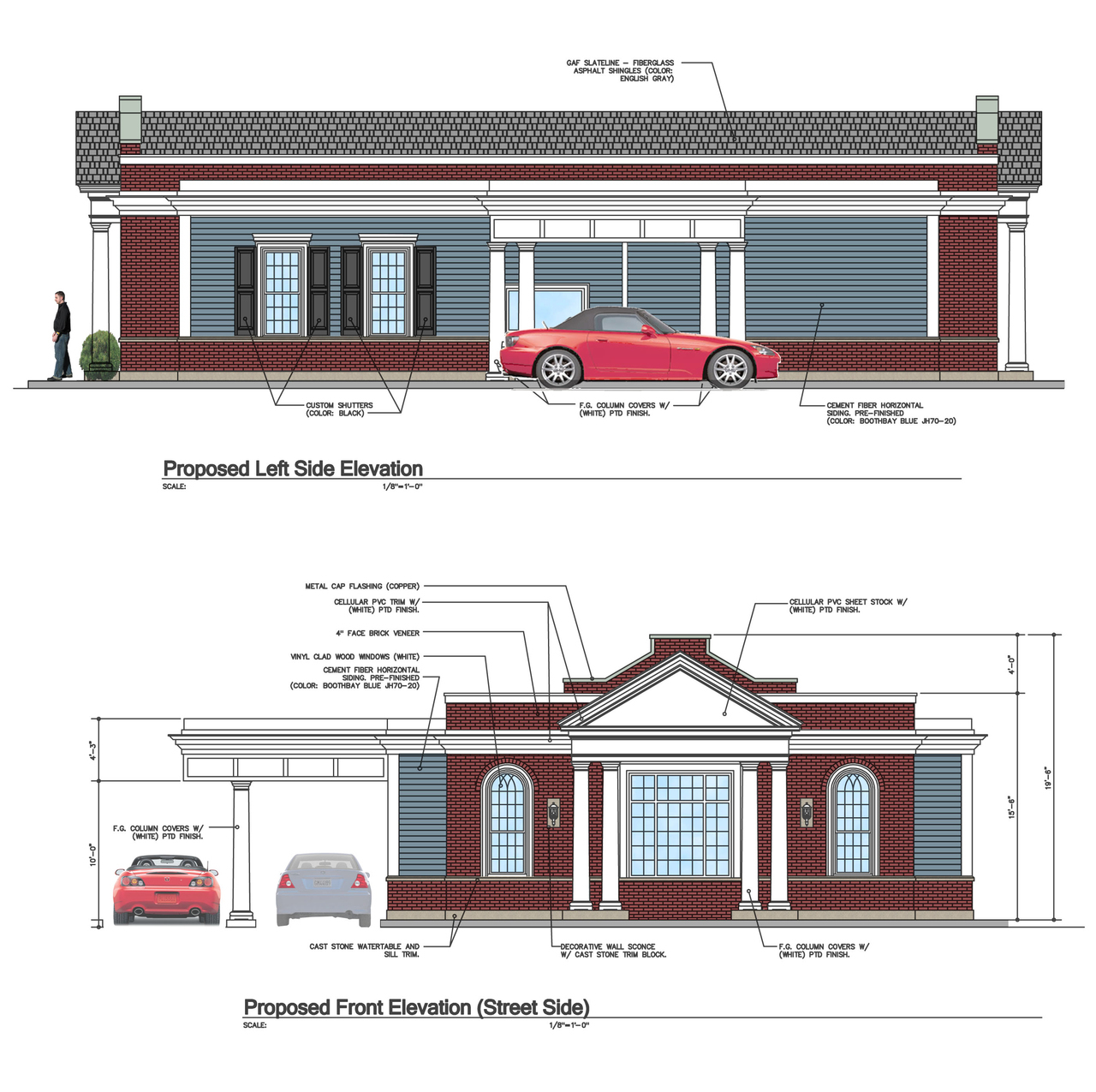 The key advantage of a blueprint is being proportionate and scaled to actual dimensions. While no drawing is 'life sized', drawings are commonly printed so that smaller units accurately reflect larger distances. For example, many floorplans are printed in 1" - 16' scale where 1 inch is equivalent to 16 feet, or 1/4" = 1'-0", where a line measuring a quarter inch equals one actual foot. 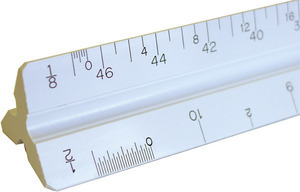 Being aware of the correct scale of a drawing is key to estimating distances, which is a critical part of estimating cable lengths or determining FoV and PPF calculations. The video below shows how to measure these distances using a common architectural scale or ruler. 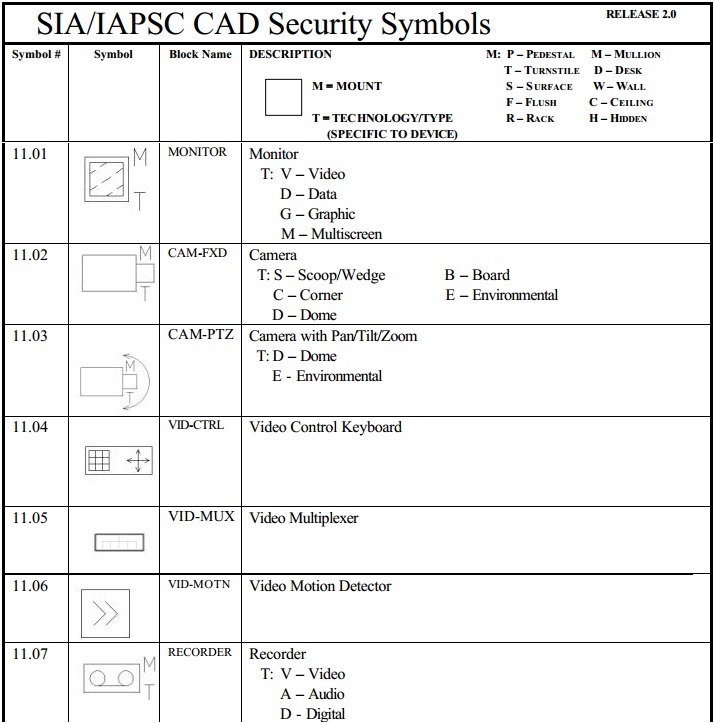 However, these symbols are not very current - they were last updated in 2000 and still describe analog specific components, nor are they universally adopted and local variations on the appearance of blocks may be seen.

Indeed, manufacturers often produce CAD libraries of their own offerings that supercede the general symbols depicted in the SIA standard, but camera locations are noted by 'schedule callouts' wherever they are located

Additional information about specific pieces of the building are found in 'schedules', or itemized lists. The amount of detail in the schedule is frequently substantial, and while not easily included into the floorplan itself, still contains critical information about what is shown. 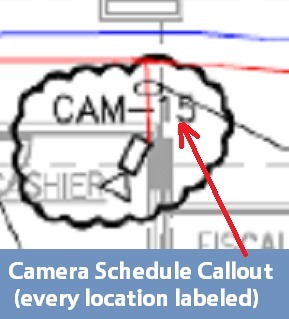 Usually a master list  that includes every label and cross references it with make / model and design attributes of system devices. The entire block is listed as a 'Schedule' and drawn onto one of the plans: 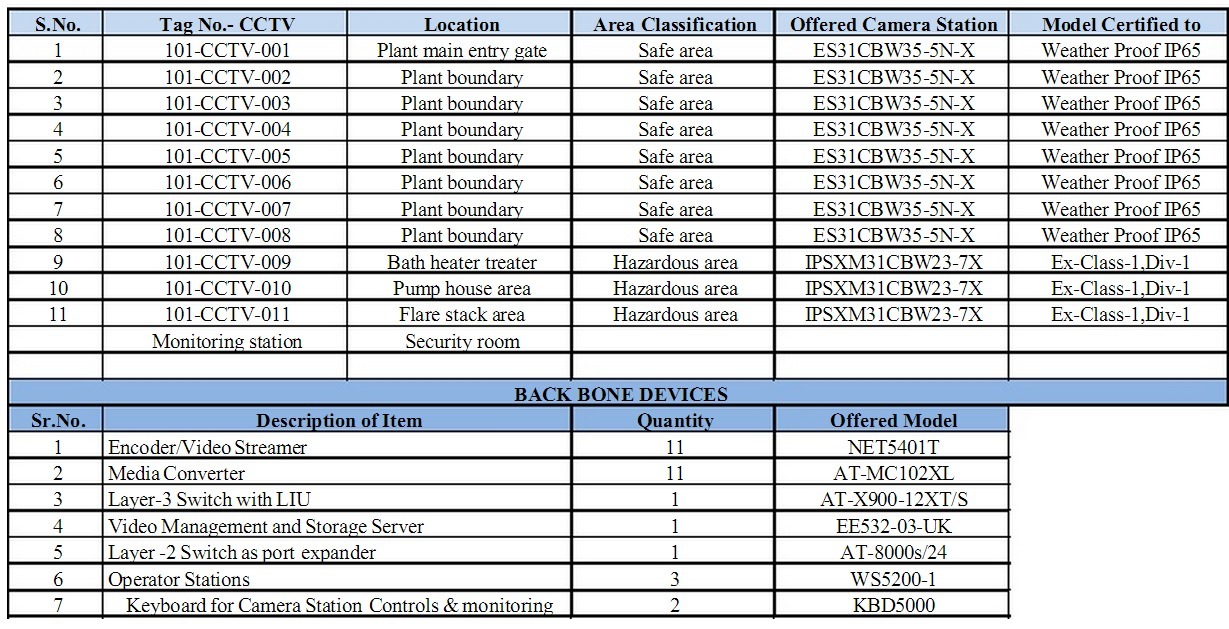 Other helpful drawing is a schematic showing how all system equipment is connected or installed. Commonly called the 'Riser Diagram', this line drawing generally simplifies both the location and distance of cabling to a line drawing in order to simplify how devices networked.  The image below is an example 'connection schematic' for hybrid video surveillance workstations: 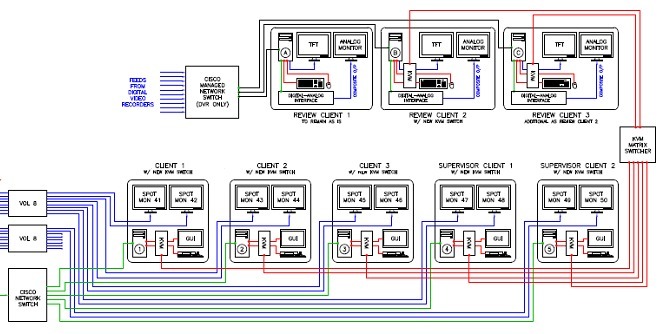 Using riser diagrams abbreviates extra details off main plans and focuses on how a system connects or how it should be physically installed in a rack, shelf, or server room.

While the fundamentals discussed above are consistent across the globe, engineering drawings typically vary between geographic areas. Differences in the way dimensions are noted, to the basic units differing between metric and empirical measures are common.  Even the basic appearance of lines and projections differ. 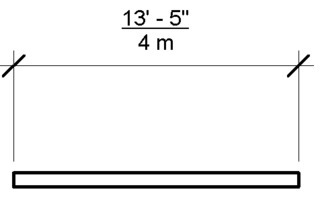 Security systems are often added or designed at the end of a building project, or even years after completion. As a result, adding these details to a set of plans is often a messy and non-standard process that must be defined for every job.

In many cases, drawings are void of 'predesigned' surveillance and security systems, and this is within the prerogative of a designer to furnish. Adding these designs to a set of floorplans is commonly done through an Addendum and may not receive an official drawing number in the permanent architect's set of plans.

If you are tasked with adding these details to a set of plans, coordinating the details of where the information is shown takes place with the architect. However, in many cases these designs are added at the owner's request outside of the construction management or general contractor process, and the final result may be nothing more than a hand-marked copy of a general plan: 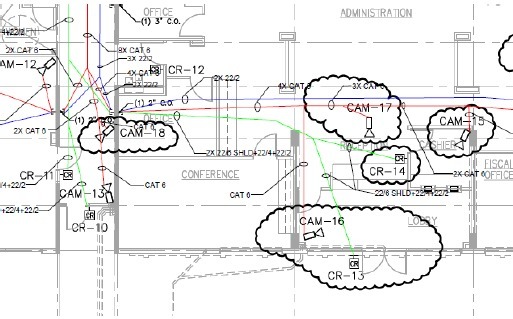 Reinforce your understanding of the report with this short, optional quiz.

How much do you know? Take 'Reading Blueprints for Security Projects' Quiz

Building Occupancy Codes and Access Control Tutorial on Nov 01, 2018
A building or room's classification can greatly impact which building codes...
Measuring For Security Installation Guide on May 07, 2018
Accurate measurement is a fundamental skill, yet many installers do not...
AutoCAD for Surveillance on Sep 24, 2012
While the construction industry made the transition to computer aided design...
Comments (9) : Members only. Login. or Join.