The big appeal is getting HD resolution with SD analog pricing and simplicity of setup.

IPVM has already tested HD-CVI offerings from Dahua and Q-See. Now, we turn to Honeywell.

Honeywell is a major manufacturer playing catch up compared to the likes of and HDCVI offerings.

The HQA line is available to dealers via ADI, with no authorized online sales to end users. The Honeywell HQA product tested is priced as follows:

Comparatively, Dahua and Q-See bundled camera and DVR/NVR kits can be found easily online. For example, this 4 channel, 4 camera NVR with 1TB storage from TigerDirect for ~$680 USD Online. Alternatively, Dahua has 4 Camera 1TB HDD for HDCVI kits available on Amazon for ~$350 online [link no longer available], which is ~$585 cheaper than what we paid for a Honeywell DVR and 2 cameras.

On the other hand, dealer pricing for the Honeywell HQA equipment will be fairly close to the pricing of buying Dahua off the Internet.

Honeywell's adoption of HDCVI is significant, as it brings the technology to North America via a large traditional analog incumbent with the stocking and advertising power of ADI, one of the largest surveillance distributors in the world.

Image quality and DVR performance are similar to other HDCVI product we have tested, though integrators may prefer the Honeywell name, as well as longer warranty and local support, instead of Dahua or other OEMs. In particular, dealing with Dahua directly can be very difficult or non-existent in many countries.

Compared to Dahua and Other OEMs

The Honeywell HRHH DVR's user interface, both local and via web browser, is extremely similar to Dahua and its other OEMs, such as Q-See, with few changes. These similarities (and fine differences) are seen in this video:

Also similar are the local interfaces, and below we've combined the Honeywell and Dahua live view and main menus for comparison: 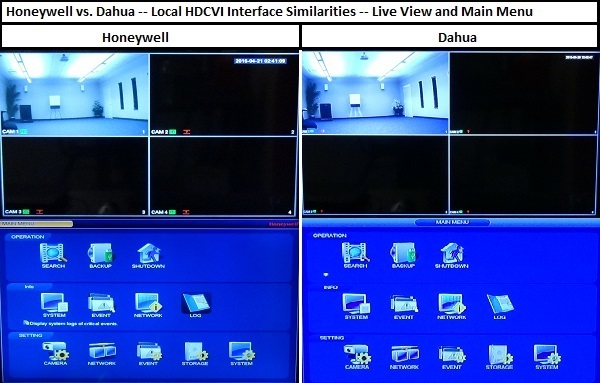 In this video, we take a look at the Honeywell HDCVI cameras we used for testing, and again, notice the similarities between these and comparable models.

The image below shows the front panel of the Honeywell HRHH2042 in comparison to HDCVI DVR models from Dahua and other North American OEM Q-See. The controls of the Honeywell and Dahua DVRs are similar, with play, pause, record, etc. buttons, as well as menu keys and arrow controls for setup. The Q-See model does not have all the same keys, only menu and arrow functions. 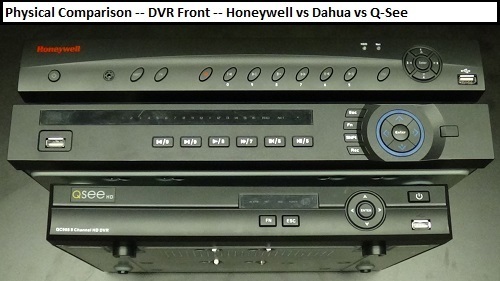 The rear panels of the DVRs are similar, with the same connections, including audio in and out, digital I/O, RS-485/232, VGA and HDMI (aside from Q-See, which lacks I/O and serial control), though in a different layout. Note that the HRHH supports SD analog cameras in addition to HDCVI, a feature found in latest generation Dahua DVRs, but not earlier models.

Integrators may find Honeywell's warranty and support policies to be advantages over using Dahua or their OEMs, as both are local and via familiar channels:

Honeywell offers a three year warranty on their HQA equipment, including 1-year of  "365 Swap" which they describe as "a full year from the date of purchase for easy, no-hassle returns and exchanges on defective product, right at ADI." This means that failed cameras may be exchanged same day over the counter at ADI, with no RMA or shipping process required.

By contrast, Q-See offers a 2-year warranty, but returns must be shipped back, less convenient than performing an ADI counter exchange (local for many integrators). Dahua's warranty policy in North America is a grey area, with many products purchased from unauthorized channels and therefore receiving no warranty support.

Honeywell's tech support is North America based, but restricted to authorized channels, e.g., dealers, distributors, and consultants (and indeed they would not answer questions when we contacted them), with limited or no end user tech support. Integrators especially may prefer this policy, as end users may be referred to them for support by Honeywell, generating leads or service revenue.

Unlike Honeywell, Q-See technical support is open to all users, both online [link no longer available] and by telephone. Dahua, like their warranty policy, does not support North American users directly. Users should expect limited support via overseas sellers.

As with the majority of the HDCVI products we have tested, the Honeywell HQA cameras performed similar to those from Dahua, both CVI and IP, as seen in these comparisons.

In full light, ~160 lux with all cameras set to 1080p, we found that details between the Honeywell and Dahua HDCVI cameras were similar, with no practical advantage to either. 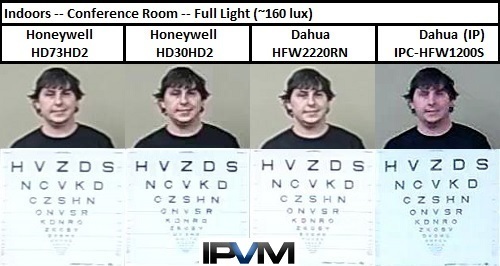 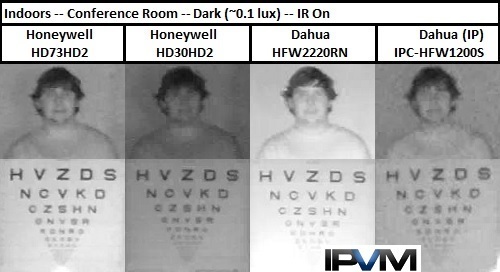 This test covers only issues specific to Honeywell's HQA line. Those looking for more information on HDCVI in general, including DVR usability, image quality, cable quality issues, and more should see our other tests:

HD Analog vs IP Guide on Jul 16, 2019
For years, HD resolution and single cable signal/power were IP camera...
Bosch Divar NVR Tested vs Dahua on Oct 05, 2017
Bosch has a partnership with Dahua. But what type of partnership is it? How...
Security Cameras 2016 Review on Dec 23, 2015
In 10 minutes, this note explains the current state of security /...
Mega-OEMs vs Micro-Relabelers on Aug 04, 2015
Manufacturers like Dahua are sold under dozens, if not hundreds, of aliases...
$100 True WDR Camera Tested (FLIR CVI) on Jul 31, 2015
True WDR has traditionally been quite expensive. And HD analog has so far...
ADI's W Box Camera / NVR Gen 1 (Hikvision) Tested on Jul 22, 2015
ADI moves hundreds of millions of dollars worth video surveillance equipment...
Samsung Goes AHD, Sets Battle with Dahua and Hikvision on Jul 20, 2015
HD analog continues to grow. One of the biggest problems so far is the lack...
ADI W Box Accelerates Race To the Bottom on May 22, 2015
ADI is aggressively ramping up promotion for its new white label brand "W Box...
The $100 MP Era is Here on May 13, 2015
The video surveillance industry has entered a new era. This era is...
HD Analog Usage and Rejection Statistics 2015 on May 11, 2015
Non-IP HD cameras are one of the most notable new trends in video...
Comments (4) : Subscribers only. Login. or Join.