Hikvision continues to break low cost barriers, now with a 1080p IP IR PTZ for under $800 online, the DS-2DE5220I-AE, half the price of past models.

We bought one of these new models to see if this new low price comes with tradeoffs, tracking subjects at ranges over 500' day and night to compare to other IR PTZs from our tests, including the Bosch Autodome 5000 IR, FLIR DNZ, and Dahua.

The Hikvision DS-2DE5220I-AE offered some of the best IR PTZ performance we have seen, with minimal focus issues, no overexposure issues, and competitive IR range, all at a price drastically lower than many competitive IR and non-IR PTZ models.

Though, those seeking absolute longest zoom range should note that the 5220I provides moderately less detail at long ranges due to its lower zoom ratio. If this is a key concern, users may be better served by other, longer zoom options.

The DS-2DE5220I-AE is similar to other IR PTZ cameras, though the IR LEDs are "hidden" behind a black faceplate and only visible when turned on. It is one of the most compact IR PTZs we have seen.

We review the camera's construction in this video:

The Hikvision is marginally smaller than the Bosch IR PTZ, below is a side by side comparison. 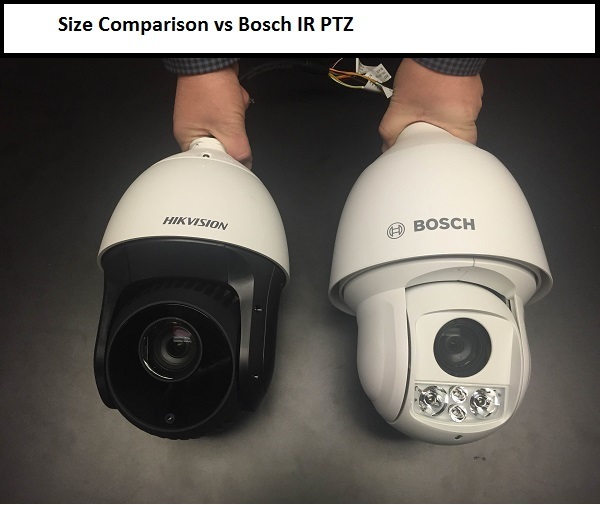 One of the key issues in PTZ cameras is the physical pan/tilt mechanism (gearing, belts, slip rings, etc.), often the first part of the camera to fail. Though our test was relatively short, about 10 days, and we cannot comment on longevity of these components, we noticed no immediate issues. Pan and tilt worked smoothly, without issues, and we noticed no preset "drift", both frequent complaints about PTZ models.

Configuration of the 5220I is similar to other Hikvision cameras. Note that the camera does not include Hikvision's H.264+ smart CODEC, found on many/most new models.

The Hikvision IR PTZ offered some of the best focus tracking seen in IR PTZs we have tested, nearly no issues with the camera slipping out of focus or taking long periods to autofocus at night (common in other tested models).

In the video below, we review subject tracking with the 5220, from over 500' to just in front of the camera.

Focus tracking in the Hikvision 5220i is substantially faster than other IR PTZs, seen in the sample clips below (Hikvision on left, Bosch Autodome 5000 IR on right). Both were taken starting at ~450' range, with the subject walking in about ~100'.

The 5220 uses only four LEDs, two for near/wide angle and two for far/narrow. Both sets of LEDs turn on/off and adjust power depending on zoom level, seen here:

In our tests, subjects were clearly illuminated at over 500' range. 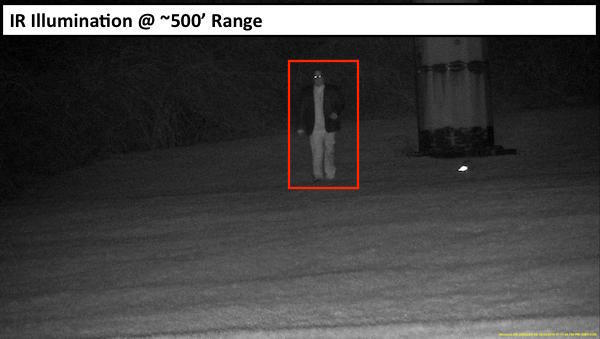 Due to the camera's more limited zoom range, PPF of distant subjects was reduced compared to competitive models, reducing details moderately. This is noted in the image comparison below. Where other ranges (50-250') were zoomed to ~ 25.5'/75 PPF on target, at ~500' range, the camera zooms only to ~32'/60 PPF. 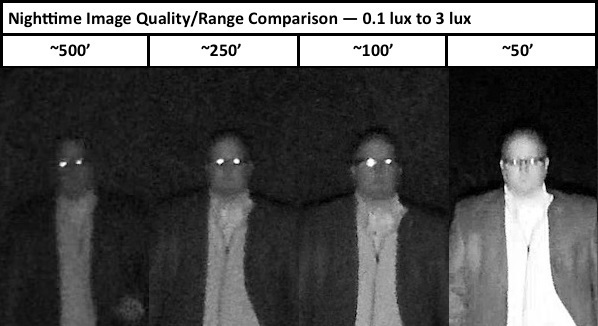 The comparison below shows image quality at these ranges during the day.

Limited Zoom Range vs. Others

This results in reduced details at long ranges, as seen below. We have overlaid (in red) the narrower Bosch FOV in the Hikvision image here for comparison. The Bosch camera produced rough facial details of the subject here, while Hikvision is more pixelated, reducing details. 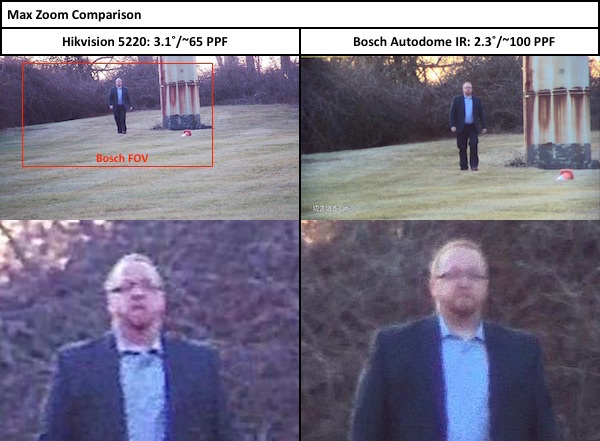 We measured bandwidth of the Hikvision and Bosch IR PTZs in our live tracking tests, day and night. During the day, the 5220 was over 2 Mb/s lower than the Autodome IR, under 3 Mb/s. At night, the cameras were closer, ~3 Mb/s vs. 3.74 in Bosch. 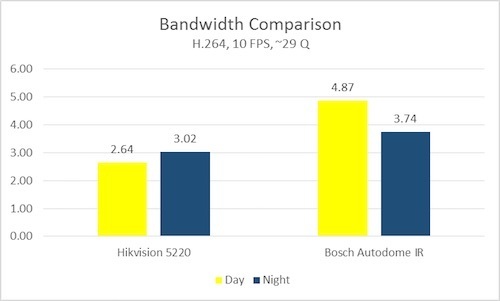 The camera was tested using default settings, with framerate and GOP both set to 10, with quantization ~30.

IR Surveillance Camera Guide on Feb 06, 2020
Integrated infrared (IR) cameras are everywhere in 2022, but not all IR is...
Axis First IR PTZ Tested (Q6125-LE) on Aug 21, 2018
Axis is very late in releasing IR PTZs. While competitors such as Hikvision...
Axis Launches Mini Concealed IR PTZ on Apr 11, 2018
Axis has been a laggard in releasing IR PTZs. While the company released...
PTZ Camera Guide 2016 on Sep 15, 2016
Pan/Tilt/Zoom cameras remain critical parts of many surveillance systems,...
Hikvision ~$300 Mini PTZ Tested on Jul 08, 2016
A PTZ camera at fixed dome prices? That is the promise of Hikvision's new...
Comments (7) : Subscribers only. Login. or Join.