We bought their 4-channel 1080p HDTVI kit [link no longer available] for $199 online to see how it stacks up to their commercial, Hikvision and OEM branded product, both TVI and IP.

This picture shows everything included in this kit: 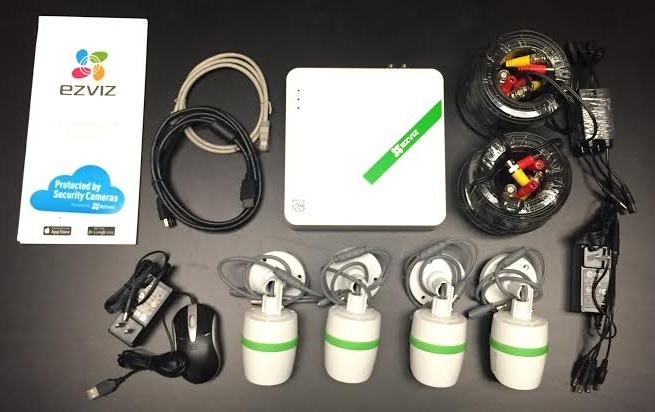 Hikvision has taken great pains to hide its association with itself Ezviz in its marketing.

And to its existing dealers this competes with, Hikvision sent them a letter, claiming "The hardware, software, and operation structure of Ezviz products are distinctly different from Hikvision". However, our testing of Ezviz herein with their iVMS-4200, iVMS-4500 and 3rd party systems show that Hikvision is wrong.

Until now, Hikvision 'overseas' has focused on traditional dealer distribution, with their own line and numerous OEMs, almost always offering far lower than mainstream prices.

Now, with Ezviz targeted direct at end users, and performing similarly to their own commercial gear, this has significant potential to undermine their own existing dealers (especially with 8 and 16 channel versions they also offer), Hikvision's own OEMs and other players in the SMB space.

For savvy end users, they can now buy Ezviz kits online and use the included Hikvision 4200 and 4500 VMS support to manage fairly large systems as well.

Ezviz cameras and DVR are Hikvision with some aesthetic and user interface changes. Ezviz DVR uses Hikvision MAC address, is discoverable via Hikvision tools/CMS, and uses a web interface with only aesthetic changes (different color scheme, some rearranged elements).

In our tests, Ezviz TVI camera performance was similar to Hikvision and OEM 1080p TVI/IP models in full light and low light scenes.

Ezviz web interface was simple to use, with single and multi-camera live viewing. Playback was limited to one camera only, with timeline showing both continuous and event video.

Limited ONVIF out support, functioning properly in ONVIF DM, but unable to be successfully added to VMSes. RTSP streaming of each channel functioned without issues.

Ezviz is being sold via online retailers, notably Amazon and Newegg, and big box/club stores such as Sam's Club. The kit sells for ~$200 USD online.

Like other low cost kits, Ezviz contains not only the cameras and DVR, but cables (coax, power, HDMI, network), and power supplies for both. Also included are line isolators for each channel (connected in line with 12VDC power), which may prevent or eliminate some image issues fairly common in analog systems.

Ezviz product is color coded, either green for HD analog or blue for IP, seen on the top of the DVR and on a band around each camera. Some users may not like the look of the bright green ring, as it may not fit with the aesthetics of their home or facility, nor blend into the environment.

What is missing from the kit and any of the product itself is any mention of Hikvision. All labels and copyrights mention Ezviz only, with no mention of their parent company anywhere.

We review the kit contents in this video:

The DVR itself is very similar to Hikvision and other low cost compact DVRs in a mini form factor. A QR code is located on the top of the unit which users use to add the DVR to their account. We look at the DVR in this video:

The Ezviz HD analog 1080p camera is very similar to Hikvision labeled models, sharing some features such as the IR layout, wall mount, and cable whip. The housing itself is more rounded, with the noticeable green band around the camera:

The Ezviz DVR ships with a QR code on the top, which users scan via mobile app to add the device to the system. Alternately, the device serial number and verification code (found on the DVR label) may be manually entered via the mobile app or Ezviz web interface.

Using either method, when this process works, it is fast, taking only 1-2 minutes to connect and stream. However, in our tests, sometimes QR codes were seen as invalid, or verification codes not accepted, even when using manual entry methods.

We demonstrate the process, and these issues, in this video:

When connected to Ezviz, firmware for recorders and cameras is automatically kept up to date. This reduces the chance of hacking found in legacy Hikvision and OEM products.

The Ezviz interface is simple to use for live viewing and playback, similar to other cloud services. It offers single camera live view and playback via a timeline (with motion event markers as well as continuous video). Up to four live cameras may be viewed simultaneously in a 2x2 split view, but playback is limited to a single camera.

Note that cloud recording is unavailable for DVRs, with video stored locally only. Additionally, no export is available from devices which record locally, such as DVRs or cameras using SD cards.

We review this interface here:

[[NOTE, 2016-11-01: In current firmware versions, the web interface of Ezviz DVRs is no longer available. Users must view/manage the device via the local interface (mouse/monitor connected) or via the Ezviz cloud interface.]]

The web interface of the Ezviz DVR is essentially the same as Hikvision models, using a different color scheme, and changing the location of some UI elements. For example, PTZ controls and camera list have been swapped left to right on the live screen. Functions are otherwise similar.

Users may use Hikvision's iVMS-4200 CMS (see our test) and iVMS-4500 mobile app to view Ezviz cameras, in addition to Hikvision and OEM models.

Users log into their Ezviz account in iVMS and select which cameras they want to view. Note that cameras/DVRs must be added to Ezviz prior to adding the account to iVMS.

iVMS-4200 (as well as Hikvision's SADP discovery tool) will find Ezviz recorders on the local network, but in our tests, we could not connect directly to Ezviz models, even with proper credentials.

This video demonstrates iVMS-4200 with Ezviz, Hikvision, and W-Box cameras.

Like Hikvision recorders, the Ezviz DVR includes some limited ONVIF streaming out support, as well as RTSP streaming.

However, while ONVIF Device Manager connects to the DVR without issues, we were unable to add it to Exacq, Avigilon, or Milestone successfully. Other VMSes may function properly.

RTSP streaming for all channels worked without issues.