With Hikvision's release of their "Extra Infrared" (EXIR) models, Hikvision has added significantly increased IR range to their low cost '2' line, with some models offering 5x the IR range of standard models, for around ~$20 more.

We bought and tested four Hikvision models: two EXIR models in the new 4MP ValuePlus series, the DS-2CD2T42WD-I bullet and DS-2CD2342WD-I turret dome and tested them against their non-EXIR 2 series equivalents at distances up to 200' to see how these EXIR models compete.

However, there are two disadvantages, as well:

Moreover, there is one fundamental limitation for EXIR:

Standard features such as resolution (4MP in this test), framerate, true WDR capability, and H.264+ smart CODEC are included in EXIR models, as well.

Most specs of the 4MP Hikvision models tested are the same, including sensor size, resolution, FPS, true WDR, H.264+, etc. EXIR models are notably larger than their non-EXIR counterparts (bullet vs. bullet, dome vs. dome), shown below in our physical overview.

Additionally, specified IR range for EXIR models is at least 20m longer than non-EXIR models, as seen in the chart below:

Readers may see how all these cameras' features compare in the IPVM Comparison Tool.

Both EXIR bullet and turret models are substantially larger than their bullet/dome counterparts, especially the 2T42 bullet, seen here: 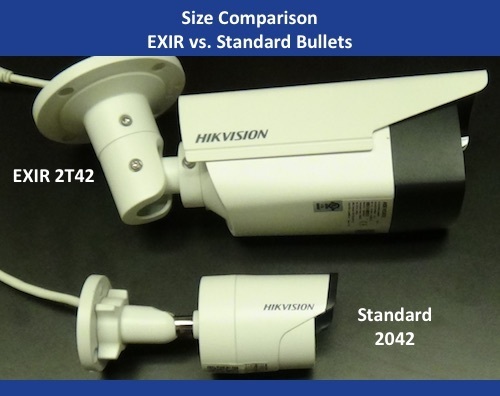 The EXIR turret dome (2342) is not so drastically larger compared to the standard compact dome (2542), though it is much higher profile: 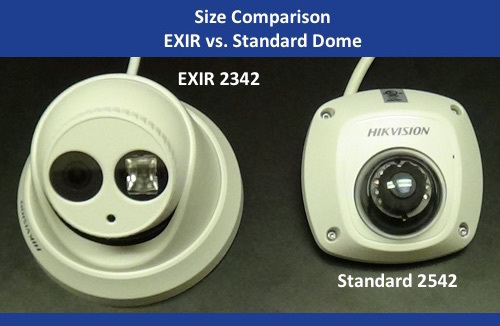 In the video below we provide a physical overview of the cameras:

Both EXIR models (bullet and dome) claim 20m greater IR range than their non-EXIR counterparts, confirmed in our testing.

The longest range offered by any of the tested cameras was 50m in the 2T42 EXIR bullet, which it reached in our tests. In the animations below, our subject can be clearly detected (though without detail) approaching the camera in the EXIR 2T42 bullet at over 50m. In the 2042, he cannot be distinguished from the background/digital noise in the scene, as the camera's IR reaches only ~30m/100'.

The comparisons below show the relative performance of the cameras at various ranges. We have included a 1080p non-IR model as a control for user's reference.

At 100' distance (~15 PPF), all cameras are able to detect the test chart, but no details of chart or subject are available. At this range, the EXIR 2T42 clearly detects the subject against the darker background, while he is essentially lost in digital noise in the 2042 non-EXIR model. 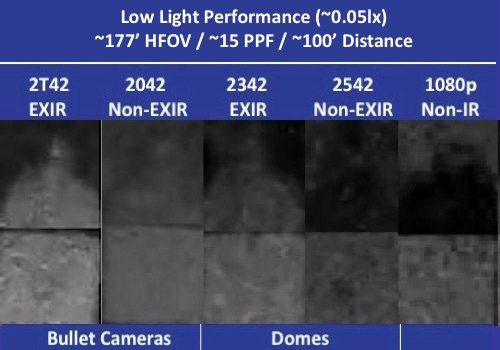 At ~40' distance (~70' HFOV), the EXIR cameras more clearly illuminate our subject, though details of the test chart are not increased. 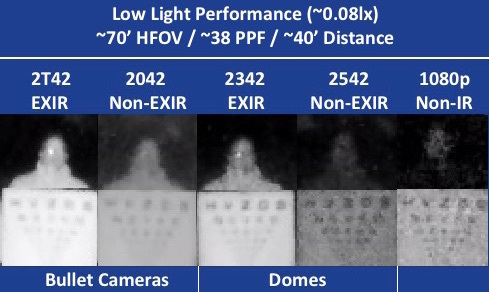 At closer range, the 2T42 EXIR bullet washes out the subject and test chart, while the 2342 EXIR turret dome washes out the chart, but shows some subject details. Both non-EXIR models perform better, though the 2042 still has issues with IR overexposure. The 2542 non-EXIR dome performs best, due to its much lower power infrared illumination. 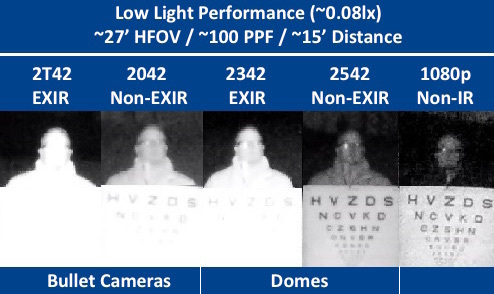 For reference/comparison, this image shows the actual tested IR range for all four Hikvision cameras, EXIR and non: 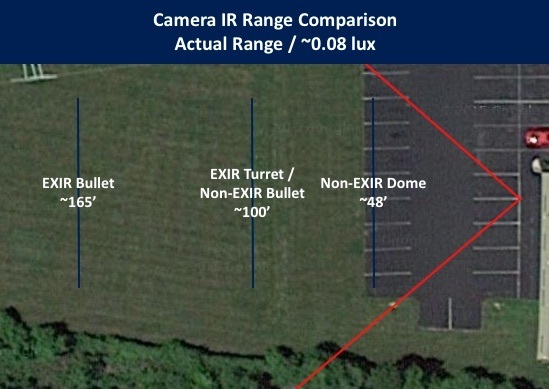 The illumination pattern of all IR models tested was noticeably darker toward the edges of the FOV, but more even in EXIR models.

For example, comparing the EXIR bullet (2T42) and standard bullet (2042) below, a brighter circle can be seen in the 2042 (right), sharply dropping off to sides, while the 2T42 appears more even:

Like the non-EXIR 4MP models we previously tested, the 2T42 and 2342 include true WDR capability, which we tested in our warehouse scene seen here: 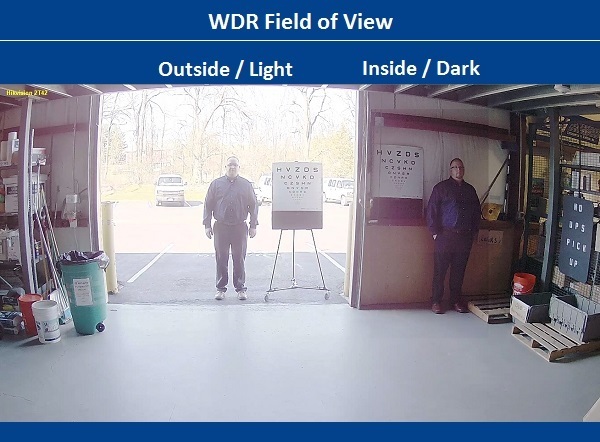 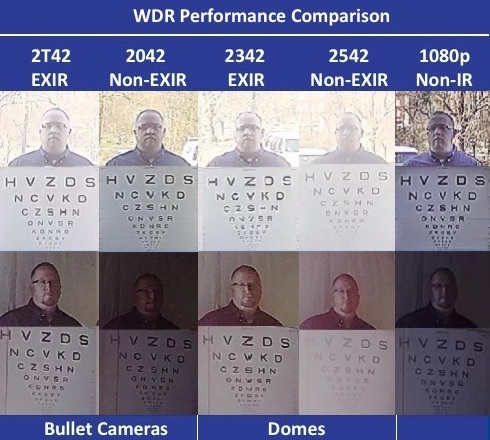 Dirty Dome Camera Test on Nov 28, 2016
Dome cameras are the most widely used type professionally but many note that...
US Embassy Requires Hikvision Cameras on Aug 29, 2016
The US Embassy in Kabul Afghanistan has required only Hikvision cameras in a...
Comments (7) : Subscribers only. Login. or Join.