Can Hikvision beat Axis and Samsung in pure low light?

The Chinese mega-manufacturer has made a name for itself as a low-cost leader, popularizing $100 HD cameras with integrated IR.

However, most do not consider Hikvision to be in the same league for high-end cameras such as Axis and Samsung. In particular, Axis started the 'super low light' trend a few years ago with their 'Lightfinder' offerings.

To see how they compare, we bought their 1080p box DarkFighter model, the DS-2CD6026FHWD-A, and put it up against leading low light models from Axis, Samsung, and Uniview, as well as their own 4132 integrated IR camera.

We performed testing in multiple low light scenes like the nighttime dark field with a subject 100' away, excerpted here:

In our tests, the Hikvision 6026 DarkFighter's low light performance was the best of all 'super low light' cameras tested by a material margin. Here is an example that show the difference (field dark scene, 100' away / 150' wide FoV):

Integrated IR still provided moderately better images, especially in very low light scenes (~0.01 and below) and at shorter range. However, in dark scenes at longer ranges (~100' distance/150' HFOV), the DarkFighter model easily outperformed the integrated IR camera, since illumination provided was weak at this range.

Performance was moderately better using Hikvision's F0.95 lens compared to the stock F1.5 model included with the camera. However, the 6026 outperformed other cameras tested, even with the higher F number lens.

WDR performance was weaker than the Axis Q1615 and Samsung SNB-6004 against strong backlight, but best in our tests in dark areas of the scene.

For top tier low light performance where IR cannot be used or beyond its range, the Hikvision DarkFighter 6026 is a solid choice. However, integrated IR models may serve better in many applications, such as indoors or shorter range outdoors scenes.

Models like the 6026 show that Hikvision can compete on performance and featureset, not only on low price, as they are historically known for. With their high-end models matching or exceeding better-regarded competitors, we expect integrator preference to continue to shift to them, as it has for the past 1-2 years.

On the flip side, for incumbents, this proves that they cannot continue to claim superior performance as an excuse for higher price.

The 6026 is only one model of Hikvision's DarkFighter line [link no longer available]. There are others in bullet, dome, and speeddome form factors, all of which use 1/2" or larger sensors, aside from one 1/3" speeddome model. By contrast, major competitors such as Axis and Sony have only a single model using larger than 1/3" sensors.

The 6026 is physically similar to other box models, Hikvision and otherwise. Most notable is the size of the F0.95 lens compared to even the larger than average 3.5-15mm stock model. 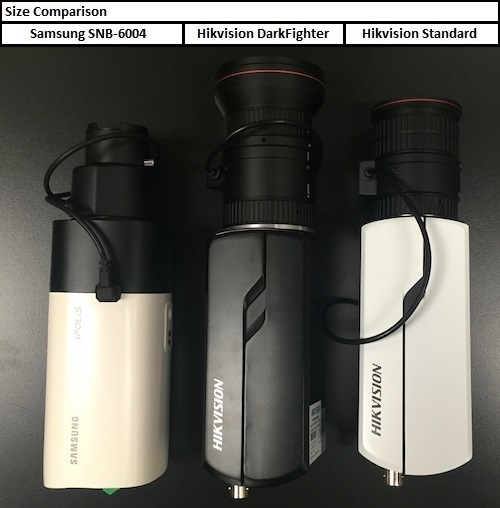 Configuration of the 6026 is similar to other Hikvision models, though UI elements and color scheme have changed in 5.3.4 (click image for larger version).

Note that the 6026 includes a number of built in analytics in addition to typical motion and tampering alarms. We plan to cover these in an upcoming test.

In this test, we used Hikvision's recommended lens, the HV0733D-6MP "DarkEye" model. Compared to the stock F1.5 3.8-16mm model, it provided noticeable improvement in low light, with a brighter image and moderately less noise. In the Axis Q1615 (below right), the test chart becomes legible and the subject visible using the F0.95 lens where it was not when using the stock F1.3 model. 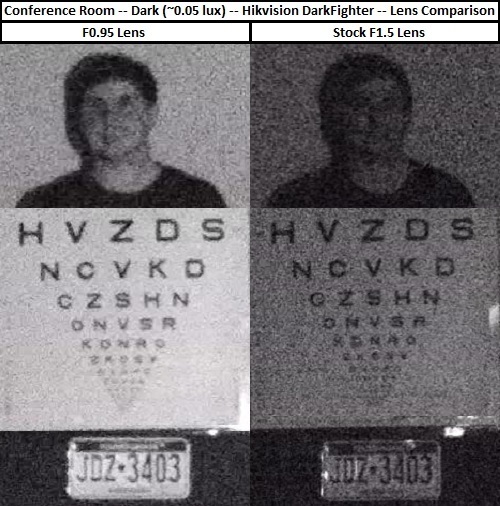 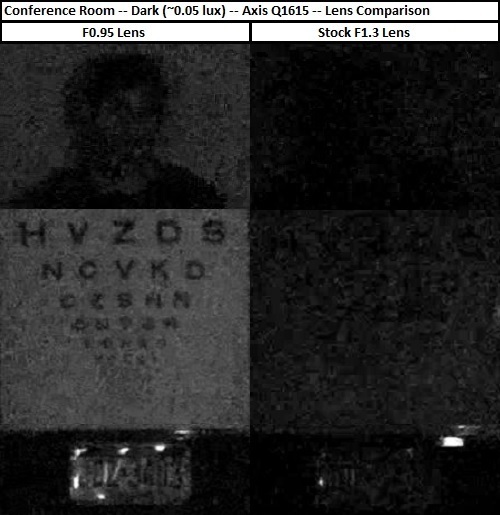 We tested this lens with other cameras, as well, in our Super Low Light HD Lens Tested report.

In low light, ~0.05 lux, the 6026 easily outperforms all other non-IR models tested, with the best subject details and a moderate increase in chart legibility. The IR equipped Hikvision 4132 provides slightly clearer images of both, though by a small margin. 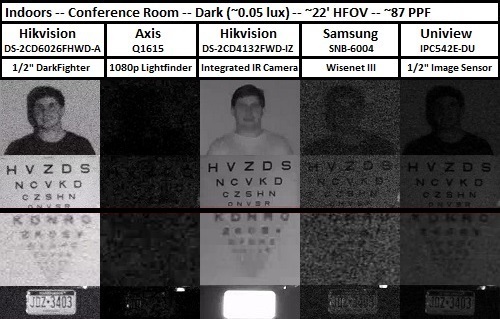 The comparison below shows relative performance of the DarkFighter camera using the stock F1.5 3.8-16mm lens. 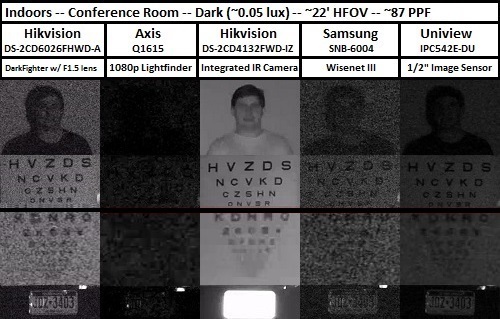 Further lowering the lights to ~0.01 lux or below (the lowest our meter can measure), the 6026 provides detection of the subject and test chart, but is easily outperformed by the integrated IR 4132. 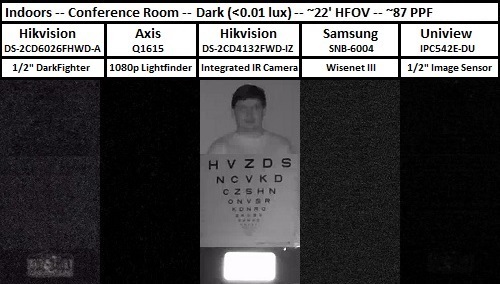 We next tested the cameras' performance at night in an open field using a wider, ~155 HFOV/~100' to target.

At this range, the 4132's IR is unable to provide much illumination (~30m IR range specified), making the subject harder to detect than in the 6026, which clearly shows him contrasted against the lighter background.

Users may download clips from this scene in a .zip archive (~161 MB). 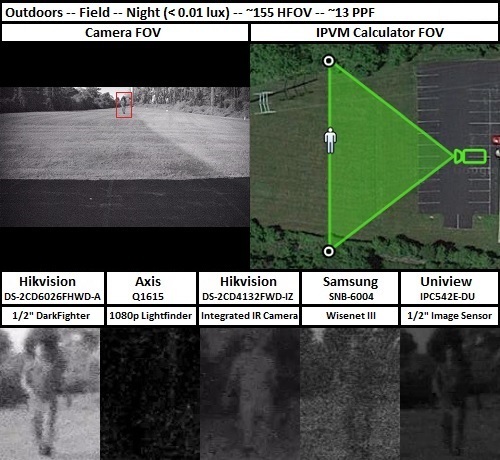 The video below shows our subject approaching the DarkFighter 6026 from ~200' in the scene shown above, approximately 0.01 lux:

Note that users could choose longer range IR models, but these typically use a narrower angle of view than the ~90 degrees used here. Additionally, external IR may further improve details, but results in extra added cost.

The 6026 was one of the top performing WDR cameras in our tests, seen here in our warehouse scene, clearly showing details of both the strongly backlit areas and dark area beside the door. 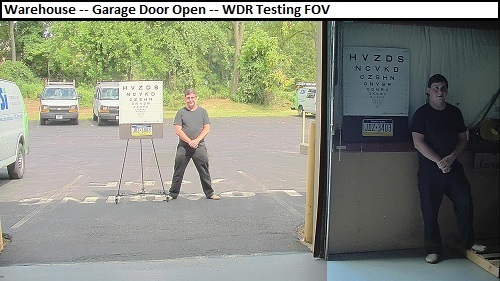 Compared to others, the 6026 provided some of the best images of the subject int he dark areas of the scene, along with the Uniview IPC542E. However, it is slightly worse against backlight than some models, such as the Axis Q1615 and Samsung SNB-6004, which show less artifacting and noise and overall clearer images of the subject's face. 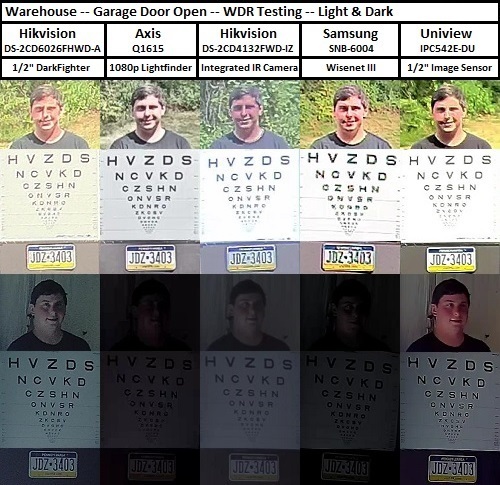 In full light, ~160 lux, images are similar to other models, though notably dimmer than some, most notably the Axis Q1615. 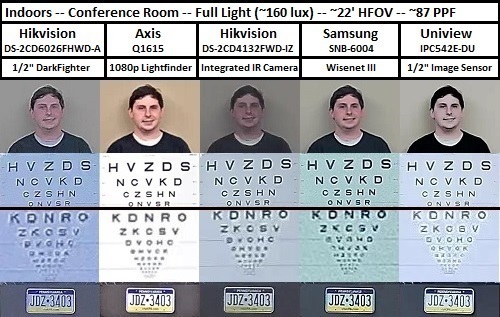 The Hikvision DarkFighter 6026's bitrates were moderately lower than other cameras (aside from the Hikvision 4132) in well lit scenes. However, in low light, the camera spikes to just under 16 Mb/s, the value set for its VBR cap, much higher than all other cameras tested except the Samsung SNB-6004.

Note that these measurements are taken using H.264, 10 FPS, with average 28 quantization. 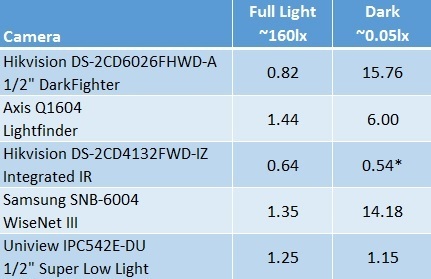 Hikvision introduced H.264+ in their latest firmwares, with dynamic compression and GOP adjustments similar to Axis Zipstream. Turning H.264+ on, bitrates dropped by 80-90% in the Hikvision models, reducing the DarkFighter camera's bitrate to ~3.2 Mb/s in the dark, much more competitive with other cameras.

We plan to test H.264+ in more scenes with more cameras in a separate upcoming report.

Dahua 4K Micro 4/3 Camera Tested (IPC-HF8835F) on Apr 03, 2018
Dahua is going big. Their new 4K HF8835F Micro Four Thirds sensor is one of...
Super Low Light Surveillance Guide on Aug 01, 2017
Historically, low light performance of megapixel cameras was terrible, with...
Hikvision Removing Auto 'Phone Home' on Mar 24, 2017
Facing pressure over their cameras auto phoning home and their Chinese...
Hikvision People Counting Tested on Mar 09, 2017
People counting has historically been a difficult task, requiring specialized...
Avigilon Pro 4K Camera Tested on Jan 03, 2017
Avigilon is best known for their large sensor, high megapixel cameras. But...
FLIR Favorability Results 2016 on Dec 14, 2016
FLIR has been buying companies one after the other, expanding from its...
Hikvision 'Phone Home' Raises Security Fears on Nov 10, 2016
The escalating attention towards Hikvision's China government ownership and...
Sony 35mm Super Low Light Camera Tested on Oct 31, 2016
Sony is making a big push for their SNCVB770 camera, touting its low light...
Hikvision Cloud Service (Ezviz / HikConnect) Tested on Aug 05, 2016
Hikvision has built out cloud services for their cameras / products,...
Ambarella Pushing These IP Camera Trends on Apr 13, 2016
Will the market soon be ruled by H.265 and 4K Multi-sensor...
The Super Low Light Shootout 2016 on Mar 28, 2016
How good are surveillance cameras in low light? With the advances in...
Raytec Vario IP Illuminator Tested on Mar 09, 2016
The Raytec Vario IP offers advanced features not commonly found, including...
Axis vs Avigilon vs FLIR vs Hikvision vs Samsung Camera Pricing on Feb 03, 2016
The 'race to the bottom' is a big issue, with average prices dropping sharply...
Testing Samsung 1/2" Wisenet III Camera on Dec 01, 2015
Continuing our series of 1/2" super low light tests, in this report we look...
Testing Axis' 1/2" Q1635 Camera on Nov 23, 2015
Low light performance continues to improve, first driven by advances in image...
The Siliconization of Surveillance Cameras on Oct 29, 2015
This is an insightful observation from Vicon's CEO Eric Fullerton [link no...
Dahua Starlight 1/2" Camera Tested on Oct 16, 2015
In super low light, an area that the West has long dominated, can the Chinese...
33 New Products Directory - Fall 2015 on Sep 28, 2015
New products or major tech isssues that IPVM has reported on this summer /...
Comments (21) : Subscribers only. Login. or Join.