A newly-elected US congressman visited Hikvision USA's office in April, posing for a photo with Hikvision's staff:

A sitting US congress member's visit to Hikvision is notable given:

However, when we contacted Rep Cisneros' office for comment, they responded by accidentally sending us an internal reply about how to handle the situation. Then, after sending an official response which admitted that they had not checked the company's background, the office backtracked and sent a new statement omitting the admission.

Cisneros, a Democrat, began his term in Congress in January 2019 representing California's 39th district, the L.A. area where Hikvision USA is based. A Navy veteran, Cisneros entered politics after years as a philanthropist, having won a $266 million lottery jackpot in 2010.

On April 25 and 26, official Hikvision USA social media accounts posted on Twitter, Facebook, and LinkedIn that Cisneros had visited their office: 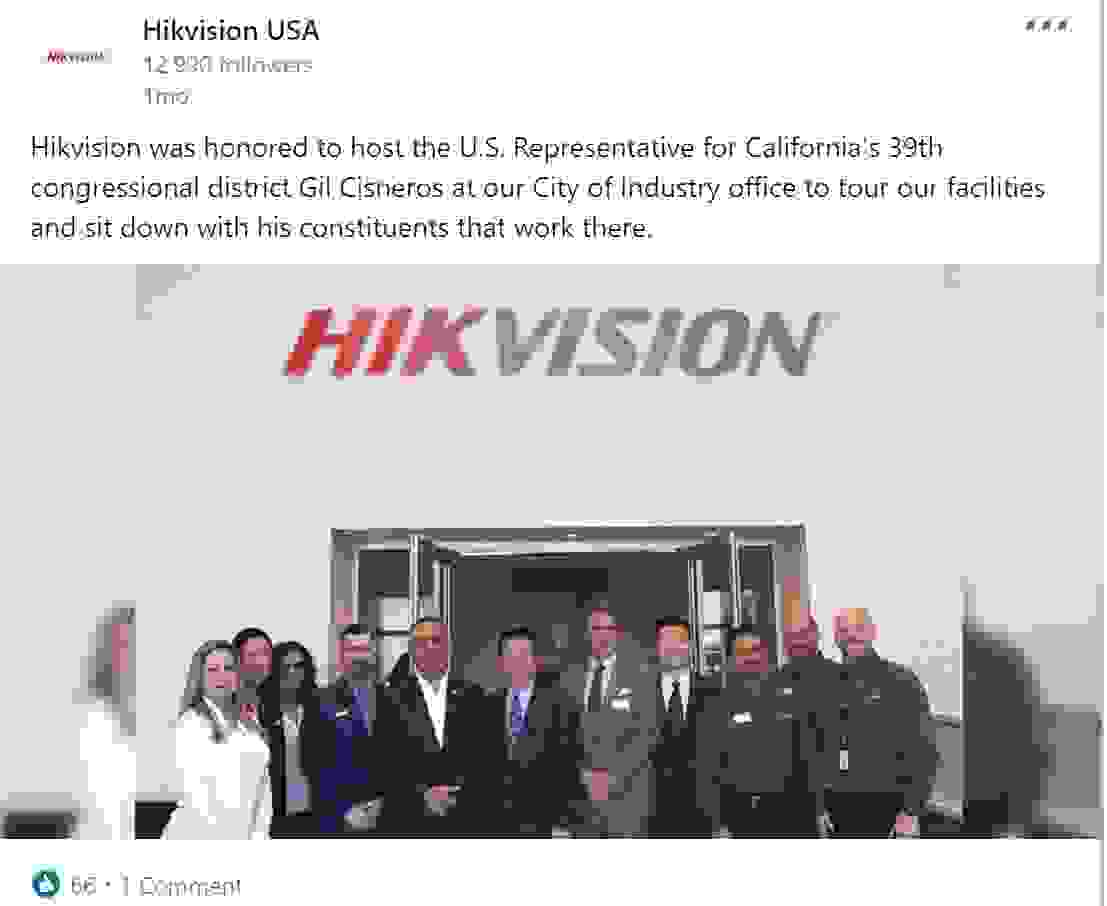 Beyond the office tour and employee sit-down, no other details about the visit were publicly available. Rep. Cisneros' office did not publicly advertise this visit.

While we did not receive a response from Quibuyen, we did receive the following email from Jordan, in an email slip-up:

The reply is clearly directed at Cisneros' staff, not IPVM, who Jordan notes "I have never heard of". "TPs" is a reference to "talking points", i.e. a quick response explaining the Hikvision USA visit. "District stats" seems to be a reference to how many employees worked at the office.

IPVM did not receive an official response from Cisneros' office for about 10 days, so we followed up when it was widely-reported that Hikvision was once again being considered for human rights sanctions by the US government over its Xinjiang operations.

This finally elicited a response, with spokesman Michael Quibuyen sending an official statement:

“Congressman Cisneros makes every effort to tour businesses in his district when asked by constituents. As the Representative for California’s 39th Congressional District, the Congressman is committed to acknowledging and visiting companies that contribute to our local economy, especially ones that provide jobs for our constituents. This visit was scheduled and executed prior to the reveal of the recent evidence of the company’s background. His dedication to constituent requests is only matched by the seriousness with which he takes his oversight responsibilities to preserve and protect America’s national security interests.” [emphasis added]

The statement was noteworthy for admitting that the Hikvision USA visit took place without much due diligence, even though "evidence of the company's background" was already public before the latest sanctions considerations. (Cisneros became a Congressman in January of this year, while Congress' NDAA ban was passed last August.)

Also worth noting in the statement is the mention that Cisneros tours businesses when "asked by constituents", implying that Cisneros did not come up with the idea to visit Hikvision but was responding to the company's request.

However, a day later, the spokesman sent a new statement, which omitted the bolded sentences above about the Hikvision USA visit:

Congressman Cisneros is committed to acknowledging and visiting local businesses that employ constituents and contribute to the 39th District's economy. His commitment to serving his constituents and the community is only matched by the seriousness with which he takes his oversight responsibilities to preserve and protect America’s national security interests.

IPVM followed up by asking why this new statement was so different. We have not received a response but will update if we do.

Hikvision has been a relatively unknown company outside of the video surveillance industry, however, that is changing due to its Xinjiang projects and wider US-China tensions. Some politicians still have some catching up to do.

Fortunately he is from California and this behavior is nothing compared to Maxine Waters.

Not to say you are right or wrong, but I don't see the relation to this article.

Well, so many unhappy people about a little humor.

If you follow politics in California, there is a lot about this win.   His office failed him, clearly that’s the issue.

Come re-election time this will be used against him and he will either take responsibility or toss someone under the bus.  Most likely an unpaid intern, but his staff manager controls his schedule.

The staff has to take responsibility. No politician, and certainly not a first-term congressperson, can know everything about every matter but they have a staff who should be doing such due diligence (if even just 5 minutes of googling).

The man is a US Congressman...not a state rep.  The Federal Government has taken a position against Hik (and others) for more than one reason, and the fact that the company is owned / ran by the Chinese Government should've been more than enough to red flag this visit.

At the very least, the optics are terrible and makes the Congressman appear to be uninformed and not organized within his office.  At most, we have to question whether this visit possibly happened as a result of campaign donations.  On the surface, it wouldn't seem bad, but essentially taking a donation from the Chinese Military would probably seem like an issue.

After Sen. Feinstein (D-CA) was caught employing a Chinese spy in her office, all members of our Congress and Senate should consider the reality that they are all potential targets for Chinese espionage and intelligence gathering.  Visiting a security company owned / ran by the Chinese Military, regardless if it employs local residents (it's their choice to take money from our nat'l adversaries), cannot simply be thrown under the rug as a mistake due to lack of awareness...it's a serious mistake that should be condemned by his colleagues as well as his constituents.

the Fedex guy who delivers to that office

A key difference between the Fedex guy and the Congressman is that the Congressman posed for a photo-op that Hikvision used in a marketing campaign, while Fedex did not. Is that reasonable to you? 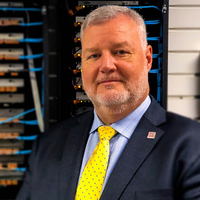 Several years ago we were contacted by SIA,  due to our close proximity to Washington DC,  to host a congressional visit by our representative Mr. Roscoe Bartlet. When he arrived with his staff, flanked by the mayor of Frederick and a host of SIA executives the first question he asked me was " how is the submarine business these days". In 1974 our parent company Digital Systems Corp. designed and manufactured Mini-mainframe computers and the US Navy was one of our customers. Some of our older corporate profiles mention that we supplied the hardware to track enemy subs globally so it was clear his staff gave him this old statement and that is all that he knew about us...I let him down gently and told him we haven't been in that business since 1984..The look he gave his staff was priceless!! Just shows how little the elected official are informed prior to these "baby kissing" events!!