An NVIDIA presentation shows a Hikvision executive is simultaneously a leader within the PRC government's national security ministry. 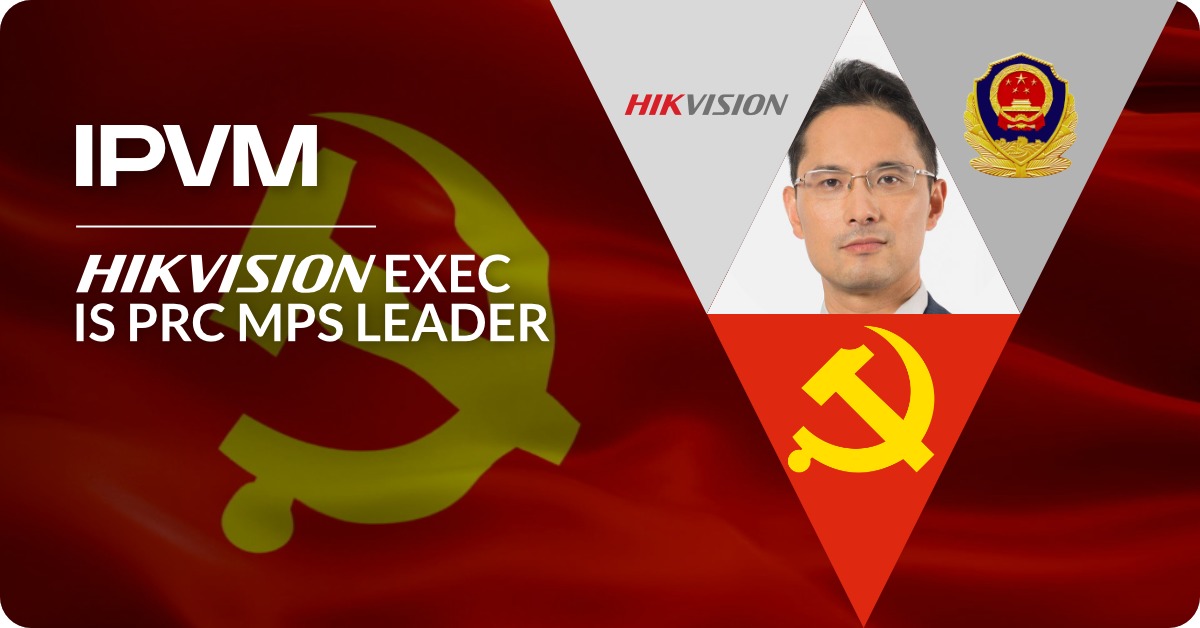 This runs counter to Hikvision's assertions that state-owned enterprises simply own shares of Hikvision.

In this note, we examine the relationship and what this means for Hikvision and the global market.

A Hikvision EVP recently participated in a US company's technology (Nvidia) 2016 conference. Here is how Hikvision described their executive:

He holds 3 roles, in the 'privately' held Hikvision, in the government owned defense contractor CETC and the national government itself, the Ministry of Public Security.

The Chinese Ministry of Public Security is China's national police, who in addition to dealing with typical crimes (like thefts, assaults, murders, etc.), is in charge of suppressing 'crimes' against the Communist party.

"The Ministry of Public Security operates the detention centers, permitting police unlimited and unsupervised access to detainees. Lawyers are not allowed to be present during interrogations; and suspects have no right to remain silent, violating their right against self-incrimination. Procurators and judges rarely question or challenge police conduct, and internal oversight mechanisms remain weak."

Tortures and deaths in custody from the Ministry, though, are reported to be decreasing as noted in a UK government report:

The Ministry of Public Security, the agency in charge of the police, claims that the use of coerced confessions decreased 87 percent in 2012, that cell bosses who abuse fellow suspects are “things of the past,” and that deaths in custody reached a “historic low” in 2013.

Hikvision is understandably a major player in the Ministry's efforts since China's massive video surveillance systems provides a powerful means to monitor and suppress any opposition to the Party.

The other organization cited is CETC, the Chinese Electronic Technology Corporation, which is a division of the Chinese government serving a dual use civilian / military role in developing electronic systems, such as Hikvision.

Given this relationship, the fact that a Hikvision executive would simultaneously be a leader within this government organization is understandable.

Pu is not the only Hikvision employee who is simultaneously a government official. Indeed, Hikvision's chairman is a Communist Party secretary as described in the Hikvision 2015 annual report (p. 62):

Chen currently serves as the head of 52nd Institute, the chairman and the Communist Party secretary of China Electronics Technology HIK Group Co., Ltd. (中电海康集团, CETHIK) and chairman of the Company [Hikvision]

Though Hikvision downplays / obscures its direct connections with the Chinese government, having these are clearly a powerful revenue driver. The Chinese government is the largest buyer of video surveillance in the world and having your executive be a technology leader for the Chinese national police is quite an advantage for the billions spent over this decade.

Hikvision has made it clear that they will not (or can not) address their much deeper government connection. This arose most prominently in their promotion within the China Communist Party.

Risks for the World

Just like the Chinese government would want to know and would be concerned about the security implications of buying surveillance technology from a US company whose executives are part of the US government, so too would many international buyers.

Given the Chinese government ownership of Hikvision, given Hikvision's pledge to comply with the Communist Party, given their executive who is simultaneously a government leader, that is a fair amount of risk for those deploying security systems in countries with security concerns about China.

And with Hikvision's leadership within the Ministry of Public Security, given the Ministry's track record of torture and human rights abuses, raises concerns about whether one wants to support such activities.

It is one thing to simply be a company operating in a country, and unfair to blame them for their government's actions. It is entirely different when a company is part of that government. Hikvision / China.

Milestone Adds Anti-Abuse, Anti-China 'Copenhagen Clause' on Feb 26, 2019
Milestone announced, at its annual MIPS Americas partner conference, the...
Hikvision Chairman Joins China National Government (NPC) on Mar 13, 2018
Hikvision Chairman and Communist Party Secretary Chen Zongnian has joined the...
"Fear Mongering": Hikvision USA Cybersecurity Director Dismisses Chinese Government Ownership Concerns on Feb 16, 2018
The facts are: The Chinese government created Hikvision and is...
WSJ Investigates Hikvision on Nov 13, 2017
The Wall Street Journal (WSJ) has released a detailed investigation into...
Hikvision Attacks IPVM on Mar 20, 2017
Hikvision has attacked IPVM repeatedly over the last month, both in the...
'Dirty': Hikvision Attacks Genetec on Feb 20, 2017
Hikvision is angry at the growing public awareness that Hikvision is owned by...
Hikvision CEO Declares 'We Do Not Cut Rates" on Dec 02, 2016
Hikvision has led another press trip to China, and this time Hikvision's CEO...
Undercover Investigation Into Hikvision on Oct 03, 2016
An undercover investigation into Hikvision's HQ was conducted by a leading UK...
Times Investigates Hikvision's Chinese Government Control on Sep 16, 2016
The Times of UK, founded in 1785 with 1.6 million daily readers, has...
Dahua Distributor Angered "Always Give Good News About Hikvision" on Aug 11, 2016
A Dahua distributor is angry that "IPVM always give good news about HIKvision...
Hikvision Nvidia Supercomputing Partnership on Jul 18, 2016
Hikvision is gearing up its supercomputing efforts. Partnering with Nvidia,...
US Government Entities Hard Spec Hikvision on May 26, 2016
The US and Chinese governments are working together. Now, US government...
Hikvision And The PRC China Government on Dec 07, 2015
Here are the facts about Hikvision's China government ownership. #1 Fact -...
Comments (61) : Members only. Login. or Join.