Hikvision, in a new Chinese financial filing, has admitted that its USA sales are now falling.

Less than a year after the US government passed a law banning Hikvision but still months away from it going into effect, the impact is already being felt.

Inside this note, we examine:

In Hikvision's Chinese analyst call (see transcript), they twice discussed the problems in the US market, noting once at the beginning of the call:

Due to some non-market factors, in 2018, some overseas regions experienced negative growth, such as the United States.

That 'non-market factor', though unnamed, is clearly the US government ban.

And at the end of the call, during questioning:

The situation in the United States was negative growth last year.

Hikvision did not quantify the size of the fall nor what segments are driving this fall. It is very likely that some parts of Hikvision USA's business are still growing while others (by virtue of Hikvision's admission) are falling more than the parts growing.

The two areas that are most vulnerable is Hikvision's OEM business and Hikvision branded 'enterprise' or 'project' sales since those are more frequently to entities concerned about cybersecurity and/or most sensitive to US government legal actions.

By contrast, Hikvision's SMB business and budget-brand OEMing (e.g., LTS) are less likely to be impacted. We would expect both of these areas in the US to be continuing to grow. However, how much Hikvision is straining to grow sales is a real question. The company had 5 ADI 'flash sales' in Q1 2019 alone, as they continue to resort to large promotions and discounts to achieve numbers.

While Hikvision has aimed to be #1 in all markets and the US is the world's second-largest video surveillance market after the PRC, Hikvision can tolerate losing the USA financially.

Right now, the USA makes up ~5% of Hikvision's $7+ billion revenue (and a declining portion, by nature of this fall).

In 2017, Hikvision did $5+ billion inside of China (roughly 4x what Axis did globally) and Hikvision's China sales are still growing significantly faster (20%+ vs 15.9%) than non-China sales, despite Hikvision already being so massive inside of China.

The bigger problem for Hikvision in the past year has been a slowdown inside of China, with overall Q1 2019 revenue falling to its lowest level ever - just 6.2%, with Hikvision emphasizing the core problem being their domestic market:

In the second quarter of 2018, the domestic economy began to decline substantially, and government investment tightened. Reflected in 2018, government procurement opportunities fell, some of the winning projects did not see orders, users took a wait-and-see attitude;

As some public service projects become larger in granularity and the decision cycle is lengthened, the landing becomes slower. The traction of the leveraged policy in 2018, The social capital chain is tense, the investment willingness of large enterprises and small and medium-sized enterprises is reduced, and our intuitive feeling in the market is the number of business opportunities.The amount is significantly reduced compared with the same period.

The following chart shows the decline in Hikvision's overall growth in the past 5 years, from 60% down to 6.2%: 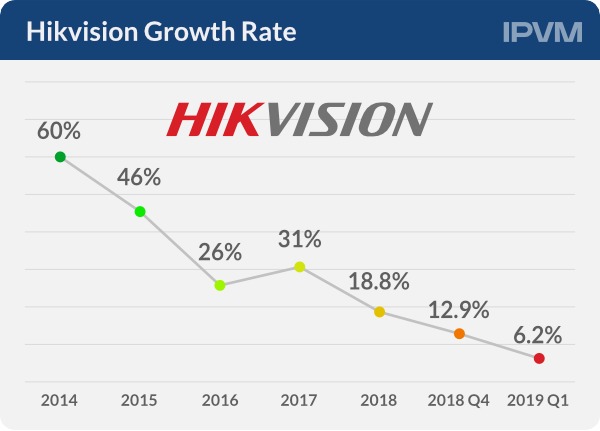 However, Hikvision also said that the Chinese market is picking back up, spurred by the Chinese government increasing spending and debt raising, with Hikvision noting:

In 2019, the government’s control measures gradually landed. The level of funds has been loosened. The number of business opportunities is rising rapidly,In March, the company's revenue was significantly improved compared with January and February. According to the market situation we are currently feeling, we think that Q1 will be the bottom in 2019. Expected Q2 revenue to grow back to more than 20%.

We believe Hikvision USA is effectively in a holding pattern until the NDAA goes into effect. For example, Hikvision USA hiring has been net flat to negative in the past year, according to LinkedIn:

Hikvision's statement recorded by SIW shows their hopefulness for a last-minute change:

Jeffrey He, the head of the company’s North American operations, said in a prepared statement to start the discussion that Hikvision’s “challenge in the U.S. on the political front” includes calls from Congress, export controls, and progress of the National Defense Authorization Act (NDAA). “It will be interesting to watch how the new (NDAA) timetable evolves,” He said, adding that he is hopeful the China and the U.S. can agree on tariffs and related trade negotiations soon. [emphasis added]

It is possible, though unlikely, that the NDAA ban of Hikvision will be overturned or shelved.

However, from Hikvision's perspective, if they cut the team further now (more than the first round of layoffs in fall 2018), it would be even harder to repair / rebuild in the case that Hikvision was unbanned.

Given the sales problems that already exist, if / once the ban goes live, we would expect Hikvision to then cut back even further retreating further into SMB.

While Hikvision China was disclosing this officially, US magazine SSI 'huddled' with Hikvision at ISC West, reporting that Hikvision US revenue grew 18% to more than $7 billion in 2018:

Of course, that is Hikvision's global number, overwhelmingly driven by China sales. Despite us notifying SSI of this error a week ago, it is still not fixed.

While the China situation is likely resolved, at least for the time being with new China government debt spending, the US situation for Hikvision is increasingly challenged.

Best Alternatives To Dahua and Hikvision on Nov 09, 2020
With the NDAA ban in effect and human rights sanctions against Dahua and...
Hikvision Q3 2020 Global Revenue Rises, US Revenue Falls on Oct 27, 2020
While Hikvision's global revenue rises driven by domestic recovery, its US...
Genetec Drops Support for Dahua and Hikvision on Jun 01, 2020
Genetec has dropped support for Dahua and Hikvision, citing US blacklisting...
Hikvision Global Revenue Falls, Hit By Coronavirus on Apr 27, 2020
Hikvision's global revenue fell in the first quarter of 2020 due to the...
Hikvision USA Refuses [Now In], Dahua USA Drives Forward With "Coronavirus Cameras" on Apr 07, 2020
Both have been federally banned, both sanctioned for human rights abuses but...
Hikvision Admits Sanctions Harming Its Financial Performance on Mar 27, 2020
While Hikvision initially downplayed being sanctioned for human rights...
Senator Vitter Becomes "Proud Member Of The Hikvision Team", Calls Out "Anti-China" Rubio on Oct 29, 2019
Senator-turned-China-lobbyist David Vitter has become a self-proclaimed...
US Government Ban of Dahua, Hikvision, Huawei Takes Effect Now on Aug 13, 2019
The 'prohibition on use or procurement' of Dahua, Hikvision and Huawei...
Australia Security Full Show Report on Jul 25, 2019
IPVM went to Australia attending the 3 days of the Australia Security...
2019 Mid-Year Video Surveillance Guide on Jul 01, 2019
IPVM's new 400+ page Mid-Year Industry Guide brings all of these issues and...
Comments (17) : Subscribers only. Login. or Join.