Hikvision IP cameras are being hacked even for end users who had not set up port forwarding and believed their cameras were 'safe' behind firewalls.

The problem is UPnP and, more specifically, how Hikvision has insecurely used UPnP over the years.

In this note, we look at the security risks of Hikvision's UPnP practices, steps they have taken to reduce it and vulnerabilities that sill remain.

Over the past few months, numerous confused and concerned users have found their Hikvision IP cameras hacked. The most common reported case is the camera being labeled 'HACKED': 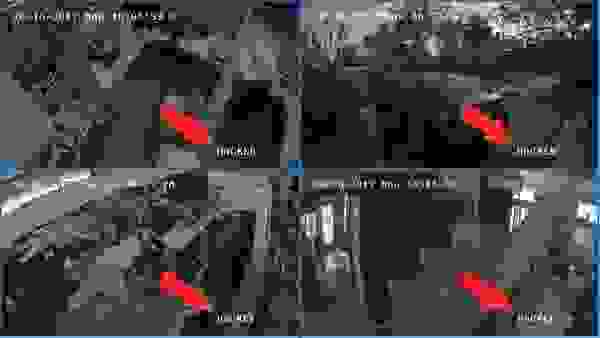 In other cases, cameras are reset to factory defaults, as described by an integrator in an IPVM discussion:

What puzzles some of these users is that they know the risks of exposing their cameras to the public Internet, and contrary to Hivision's recommendation to port forward, they have not explicitly granted access to those cameras, which in their mind should keep them safe from external attack.

As the integrator in the above-referenced discussion found out, after spending considerable time and effort troubleshooting, Hikvision had enabled UPnP Nat Traversal by default, as he explained:

Hikvision cameras enabled UPnP NAT traversal, automatically creating their own firewall rules to grant outside access until the May 2017, 5.4.5 firmware. This is a vulnerability of its own and combined with the Hikvision backdoor, it allows full control to anyone across the public Internet. Enabling UPnP NAT traversal by default, and combining it with an easily-exploited backdoor set these cameras up for attack. Attackers have recognized this, leading to large numbers of Hikvision cameras being altered to show "HACKED" text on the video feeds or being disabled entirely by having their configuration wiped out, or put into a reboot loop.

Hikvision's poor communication on the 'privilege escalation' backdoor failed to explain the risks of UPnP. Indeed, Hikvision suggested the opposite that IP cameras should be safe behind other devices:

The overwhelming majority of Hikvision cameras are accessed through a connected NVR, Hikvision iVMS software, or third-party VMS software. As such, it limits the possibility for Hikvision IP cameras to be open to public access, lowering the risk of the cybersecurity exposure. To date, Hikvision is not aware of any reports of malicious activity associated with this vulnerability. [emphasis added]

Of course, now there are widespread reports of malicious activity, facilitated in many case by Hikvision's UPnP tactic and their failure to communicate these risks.

In firmwares prior to 5.4.5, UPnP was enabled by default, with the camera's web interface showing three ports being forwarded for HTTP, RTSP, and "Server Port" (command/control data).

However, while the menu above shows only three ports, when actually enabling UPnP on a router, five ports were actually forwarded: the three above as well as 9010 and 9020, described as "IPC_CIVIL_CMD" and "IPC_CIVIL_STREAM."

A Hikvision bulletin [link no longer available] describes these ports as used for Ezviz (Hik-Connect) Command and Live View, but live view is still possible via Hik-Connect/Ezviz even when these ports are closed.

UPnP Disabled By Default In 5.5

Now, in firmware versions 5.5.0 and later, UPnP has been disabled by default:

Those wishing to use UPnP must manually enable it in the camera's web interface or when prompted turn it on when adding to Hik-Connect (see below).

Not Disabled On Upgrade

Note that while UPnP is turned off by default, it is not disabled when upgrading firmware. This means that if users upgraded from a version older than 5.5, likely for the vast majority of Hikvision cameras older than a few months, UPnP will still be enabled unless users manually disabled it.

The second way in which UPnP is enabled is with Hik-Connect, which directs users to enable 'port mapping' which uses UPnP (as shown in the red box below): 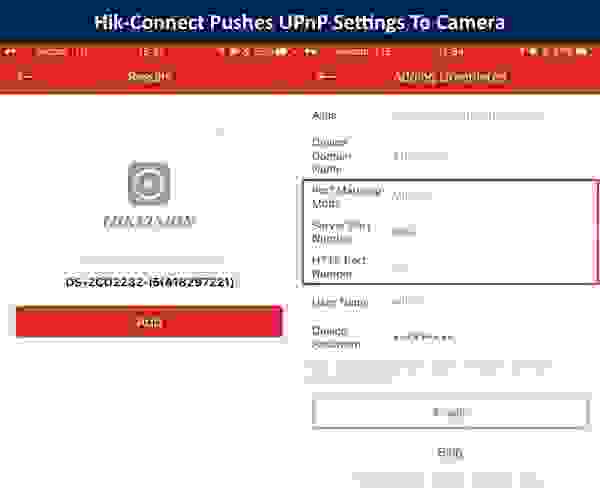 Despite Hik-Connect being their cloud service, Hikvision requires open ports for remote configuration.

Because UPnP automates the port forwarding process and is turned on by default on many routers supplied by ISPs, users may simply not be aware their cameras are port forwarded to the internet and potentially vulnerable to attack (see Hikvision Backdoor Exploit). Further, even those who are aware they are turning port forwarding on may not be aware of what services are running, as not all ports are documented in the camera's web interface.

Vulnerable devices connected to the internet eventually get hacked, this has been true since the internet gained broad popularity 20+ years ago. Sometimes these hacks are severe, for example to create botnets, as in the case of the Mirai botnet built on Dahua cameras, other times the hacks are less severe, but still cause harm or frustration to users. We anticipate seeing attacks against vulnerable Hikvision cameras escalate, as they make for a very broad and easy exploited target when shipped with UPnP Nat traversal enabled, and easily exploited backdoors that require little effort from hackers.

Hikvision Critical Vulnerability Discovered And Analyzed on Dec 01, 2022
When Bitdefender disclosed an Ezviz vulnerability, it omitted mention of...
Remote Network Access for Video Surveillance Guide on Jul 27, 2020
Remotely accessing surveillance systems is key in 2022, with more and more...
Hikvision HQ Contradicts Cybersecurity Director on Mar 07, 2018
Hikvision HQ has contradicted Hikvision USA's Director of Cybersecurity,...
IP Cameras Default Passwords Directory on Feb 09, 2018
Below is a directory of 50+ manufacturer's default passwords. Note: Change...
Hacked Hikvision IP Camera Map USA And Europe on Jan 22, 2018
The interactive map below shows a sample of hacked and vulnerable Hikvision...
Hikvision Removed From US Army Base, Congressional Hearing Called on Jan 12, 2018
Hikvision has been removed from a US Army Base and a US congressional...
Broken Hikvision App Exposes Hypocrisy on Dec 06, 2017
While Hikvision talks about a commitment to cybersecurity, their broken app...
Comments (22) : Subscribers only. Login. or Join.