With smartphone use and low-cost video recorders surging, many user's main interface to their surveillance system is their phone. With mobile video apps becoming commonplace, the questions are: How good are they really? Can they really replace a full blown desktop client?

In this report, we test apps from Hikvision and Dahua to see how they compare, what features and functions they include or do not include, and how usable these apps are as the main interface to users' systems.

Basic functions and time to load video were similar but Dahua had more advanced features than Hikvision, however, Dahua had worse stability:

Live view options in both apps are essentially the same, with both able to display 1-16 cameras (4x4 split screen), with screenshot, local recording, audio, and PTZ buttons across the bottom. 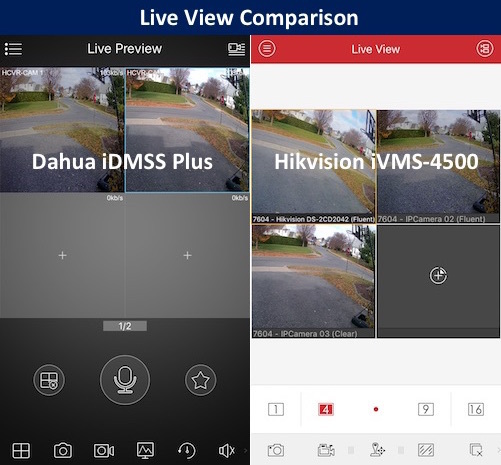 The main playback options are also similar in each app, with playback controls (play, slow, fast forward, and frame by frame) and timeline below video. Note that in both apps, the timeline for only the selected camera is displayed. Neither offers any options to synchronize video. 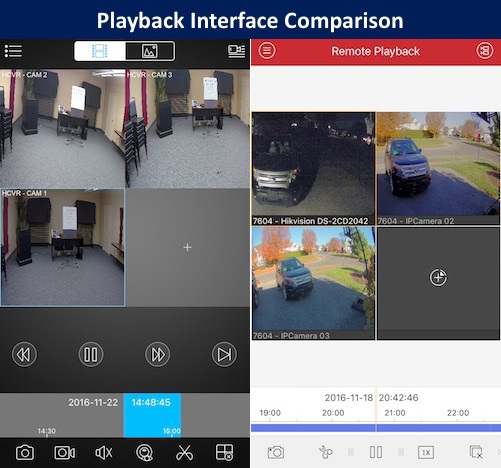 Both Dahua and Hikvision apps allow users to receive motion detection and other alarms, shown below, with the ability to tap to launch playback. Note that these functions are available in the free Hikvision iVMS-4500 Lite, but require the paid version of Dahua's iDMSS (Plus, $4.99 USD). Additionally, Dahua allows users to selection specific alarms and specific devices, while Hikvision's app only allows users to receive all alarms from a device or none. 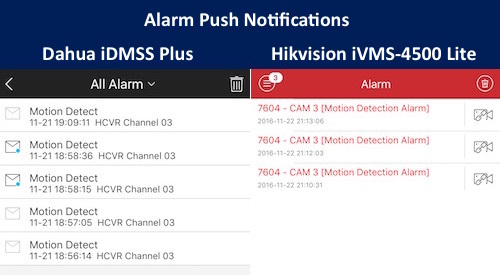 Both Dahua's and Hikvision's mobile apps suffer from unclear function buttons at the bottom of the UI, with no in-app help and user manuals hard to find online. While some buttons, such as snapshot, layout, or audio on/off are clear and universal, others are likely not obvious to inexperienced users. Additionally, pushing some buttons such as autofocus, PTZ, etc., provides no feedback when these features are not supported. Instead, they simply do nothing. 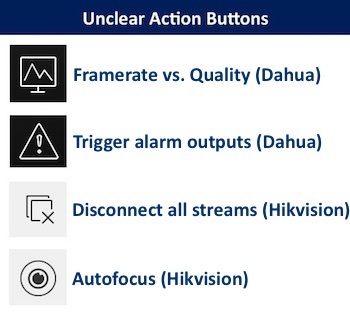 Both the Dahua and Hikvision mobile apps allow users to select between stream profiles, essentially high quality full streams vs. lower quality substreams, depending on available bandwidth. Hikvision refers to this as "Clear" vs. "Fluid", while Dahua displays it only via icons (shown below).

These settings can be found in the toolbars of both apps, shown here: 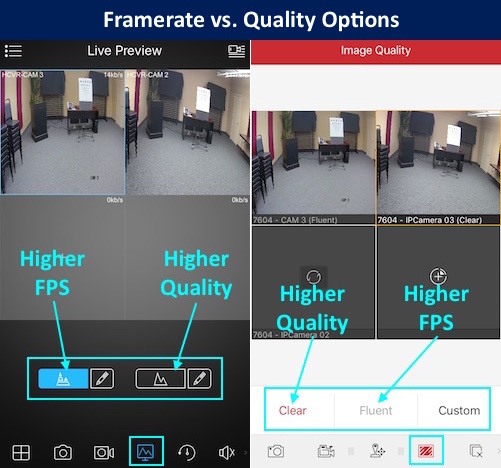 Dahua has some key advantages not found in Hikvision's mobile apps:

Users may launch instant replay on a single camera from live view, via a dedicated toolbar button. This is not available in Hikvision's apps.

iDMSS allows users to be notified only on specific events, such as analytics, video motion detection, audio, camera offline, etc., instead of the all-or-nothing approach of Hikvision iVMS-4500. 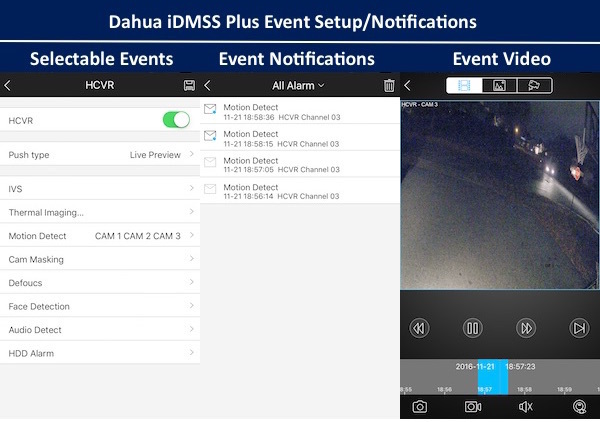 In our tests, we experienced frequent crashes of iDMSS, most often when attempting to play back multiple cameras. No crash or error information is provided; the app simply restarts. Additionally, in multiple instances the app froze, again while attempting to load playback video.

We did not experience these issues with Hikvision, with no app crashes during our tests.

Users may see multiple versions of both Hikvision and Dahua apps available depending on their platform, device, and region. For example, only iVMS-4500 Lite is available on iPhone, while iVMS-4500 HD is available for iPad (with higher resolution UI and more camera split screen options). Also, iDMSS Lite is available for free, but the paid app, iDMSS Plus ($4.99 USD), is required to receive alarms from Dahua products.

Also note that Hikvision offers a mobile app specifically for their newer iVMS-5200 platform (not yet available in North America, but available elsewhere), which functions similarly to iVMS-4500. We will cover this app in our future test of iVMS-5200.

Additionally, both of these apps may be relabeled by OEMs with little aside from aesthetic changes. For example, LTS relabels iVMS-4500 as NVMS7000, and Q-See relabels iDMSS as QC View.

Versus Other Recorder Manufacturers

Features and functions of most low cost DVR/NVR mobile apps we have seen are similar to those tested here. For example, the live screens of Dahua, Hikvision, Uniview, and Longse's mobile apps are shown below, with similar layout, framerate/quality, snapshot, PTZ, and other options shown. 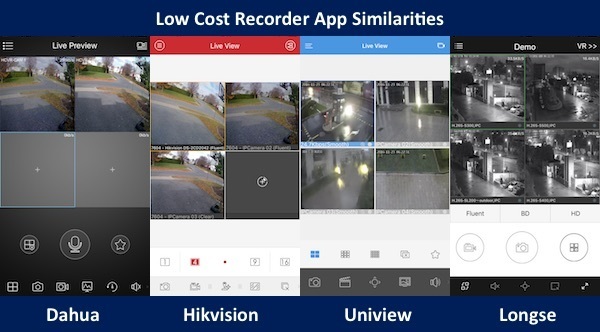 The following app versions were used in this test, all on iOS 10.0.2: