How to Handle Headlight Surveillance Problems

Headlights are a painful problem for video surveillance. Figuring out how to overcome headlight's glare is both a fascinating and frustrating endeavor. Unfortunately, these challenges have not received enough attention and focus. If you want to capture license plates, regardless of how much resolution you have, you are going to have to deal with headlights.

Below are 2 image samples from a recent intersection test that show how bad surveillance quality can get when dealing with headlights:

That's pretty disastrous and maybe a worse case scenario because there are a lot of cars. However, even with a single car, the image below shows the problems you often face: 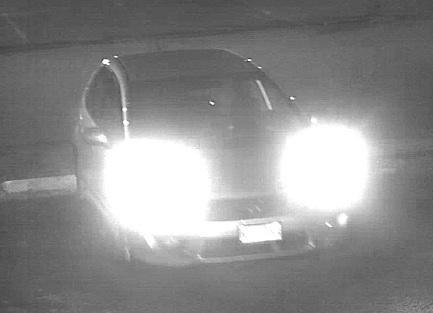 We have been doing numerous tests and conducting research into best practices and options. This report is a pre-requisite and companion to our License Plate Capture Shootout results. However, in performing these tests, we realized that the impact of headlights is so severe and so central that it demands a dedicated report explaining the issues involved and providing recommendations on how to overcome.

Inside the Pro report, we look at the following:

The most important expectation to set with headlights is choosing between these mutually exclusive scenarios:

While we see significant interest in doing both, practically speaking, you need to choose between one or the other. The only way to do both is to dedicate two cameras to the location.

That noted, we do believe some optimizations can reduce headlight problems, allowing the capture of some license plates while monitoring the general scene. Inside we explain the specifics but here are the key recommendations for using regular surveillance cameras:

Why Dealing with Headlights is So Hard

Dealing with headlights combines the worst aspects of WDR and low light scenes. Individually, these are two of the biggest problems in surveillance. Combined, it's the 'perfect storm'. Let's break them down:

In WDR, cameras are challenged in handling the wide variations in light within the scene. Here's an example scene: 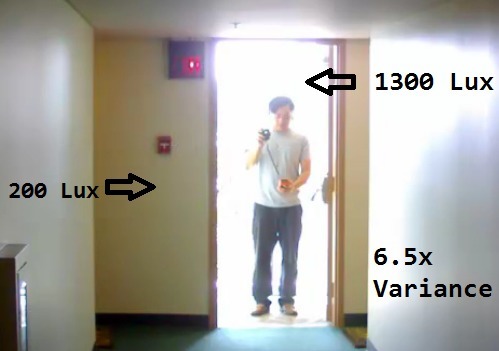 Over a few feet, the lighting drops significantly (a variation of about 6.5x). The result is that the image quality suffers - usually either the darker or the lighter part as the camera needs to 'pick' one to optimize.

Typical WDR surveillance scenes occur during the daytime so absolute low light is not a problem. However, when dealing with headlights at night, this does become an issue.

Here's an example of a vehicle with their headlights turned off: 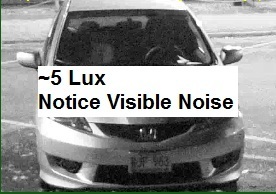 Even at approximately 5 lux, the visible noise is clearly impacting the clarity of the image and, in particular, the legibility of the license plate. This is a fundamental aspect of night time surveillance. Gain is necessary but reduces the overall resolving power of the image. The only other option is to lengthen exposure. While that will allow a reduction in gain levels, it will result in severe motion blurring of moving objects.

Putting this together, let's analyze the challenges facing surveillance of a vehicle with its headlights on: 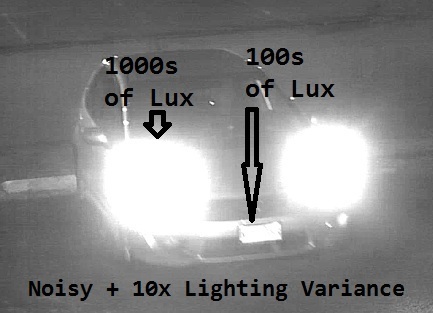 Headlight scenes combine both challenges - low light and WDR. Indeed, the WDR challenge for headlights is actually worse than what is commonly seen in indoor / outdoor doorways - the most common reference case for WDR challenges. While the specific lux levels of headlights vary based on how and where you measure the light, the variance between the area in front of the headlights and the license plates (just a few feet away) is always very steep.

Understanding Variations and Issues Amongst Headlamps

What makes dealing with headlights even more challenging are the significant variations that exist among headlamps. Here are key elements to keep in mind:

The level of variations and issues with headlights is pretty interesting. The amount of information online is fairly weak with the best primer on headlamps / headlights being the Wikipedia entry (which is well written and thorough).

Because of these headlamp variations, a tweak or trick that improves surveillance quality for some vehicles is unlikely to work for all vehicles. This is important to keep in mind as one attempts to optimize camera settings.

When looking at optimizations, the most common one recommended is to to shorten the exposure time.

Here's an example of an ideal outcome of shortening the exposure time:

Keep in mind this is with a white light LED illuminator turned on. The appropriate exposures would be significantly different without the added illumination

The Limits of Megapixel

While higher resolution can help, it does not address the main problems in handling headlights - glaring lights. If you can overcome or mitigate the headlights, higher resolution will help provide greater details and/or expand the coverage area. However, most megapixel cameras use slow shutter defaults. These defaults regularly wash out the front of the vehicle, especially if the vehicle is moving. Pay careful attention to shortening the shutter speed.

Here's an example of SD vs a 3MP camera. The 3MP camera shows more details but the headlights increase glare significantly:

The Limits of Using IR and White Light

The second most common recommendation after shortening the shutter is to add IR or white light illuminators. In our tests, these can help moderately but will not completely overcome the power of headlights. We are assuming users will add surveillance 'level' spot illuminators. These will increase the effective illumination of the scene by 5 - 20 lux (depending on the strength of the illuminators and the distance of the target from the illuminator). This is sufficient to increase the probability of capturing license plates but might make some plates overexposed (similar to how changes in the exposure setting will make some plates over and others underexposed).

Here is a simple contrast for 3 lighting types for a single car and single camera. The key point is that the performance variances are modest. It is incorrect to assume that white light LED is better than IR as these results will vary based on the camera used and the license plate. The goal is to primarily show how similar the scene remains for all 3 lighting options:

The last element we will review is using IR bandpass filters. These are very common in dedicated or specialized license plate capture cameras. What these filters do is block all visible light and only allow IR light (e.g., 850nm, 940nm, etc.).

If you are looking for a camera dedicated to capturing license plates and are willing to forgo capturing the overall scene, we recommend buying such a camera with such a filter built in.

While you can buy an add on IR filter and use on a 'regular' surveillance camera, we do not recommend it:

License Plate Capture 4K Test on Jan 11, 2016
License plate capture is one of the most popular surveillance applications....
Comments : Subscribers only. Login. or Join.