Wild claims are nothing new for security products, but one startup is claiming its home camera can detect guns.

GunDetect claims it can stop gun crime and accidents in your house cold by sensing guns it can see. The new company is so confident in its claims, potential customers can try it out for free [link no longer available]. So we did.

In this note, we look at the product and see if they can deliver.

The promo video from the crowdfunding page explains the product

While designs are yet to be finalized contingent on a successful campaign, certain details are firm:

No firm engineering details or specs on the camera have been released, but the final product will be two pieces: 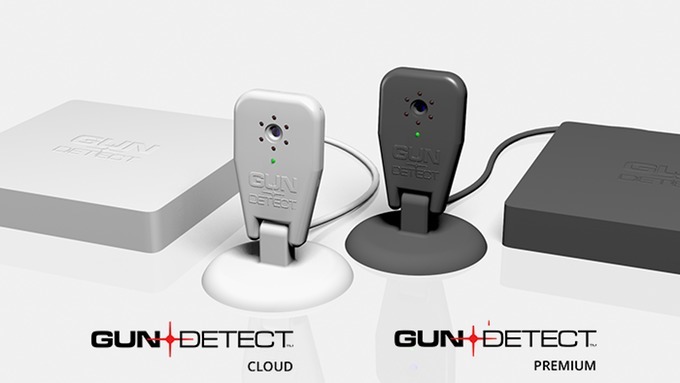 The current concept shows the camera hardwired to a separate appliance that, depending on version, is the local analytics processor or the primary WiFi interface with cloud analytics servers.

Users will connect the appliance to GunDetect's Cloud Analytics or SMS servers through a the user's home WiFi.

For Kickstarter backers, the less expensive 'Cloud' version costs $349, and the faster-detecting 'Premium' version costs $549.  Each camera is independently operated and managed, and a user with multiple units will need to operate them seperately, nor can additional cameras be added to the companion base appliance.

Unlike other firearms detectors that use radiography, GunDetect uses a machine vision system to see firearms. The company claims this is key to pricing for the residential market, as systems using high-frequency scanning or tomography are significantly more expensive, with even other machine vision systems costing $4,000 and more per camera.

However, requiring the camera 'see' the gun means that it will be unable to detect concealed or partially obscured firearms, even if the weapon is pointed and has the potential to fire in the camera's Field of View.

In a bold move, GunDetect invites you to Try Before You Buy [link no longer available] and encourages users to upload their own pictures to see if their analytic can spot guns in images.

We submitted 5 different photos to test the engine, of varying scenes that included real firearms.  Of the 5 we submitted, GunDetect only accurately ID'd the gun twice and failed in these obvious scenes:

2) A suspect brandishing a pump shotgun facing the camera:

In both cases, despite a relatively large and distinct shotgun being in the field of view, the analytic did not detect a gun.

We uploaded another scene with a single, but distinctly real, revolver admist several other toy guys. The analytic failed here also:

Being able to decern between real and fake guns is a claimed strength of the analytic, with the company saying "We’ve had great success training it to ignore water guns and gun gestures with your fingers. For realistic toy guns, such as the Airsoft pistol we used with the child actors in our Internet video, it is probably better to err on the side of safety." The major problem with that statement is instead of 'erring on the side of safety', it did not alarm at all.

However, the analytic did not always fail.  For example, the toy gun below did not fool the system:

And the system did properly alert based on the handgun in this scene:

Overall, our experience with detection accuracy is poor and less than the 'over 90%' accuracy claimed.

Simply: stay away from GunDetect.  Even if the system is able to identify a firearm in your home, there is a good chance the FoV will simply be too small or the gun will be partially obscured in some manner for the alarm to work.

If household gun safety is the prevailing concern, buying a secure gun safe or lockbox can prevent prying hands from access, and a large range of good hard box options cost less than the asking price for GunDetect.