The most important advance for the new Google Nest Cam is video analytics.

Though this has not been the focus in the mainstream press, IPVM testing shows that their video analytic advances are significant. We bought a Nest Cam and conducted testing in 4 environments: residence / home, conference room, office, and warehouse.

In our testing, Nest Aware, their recording / analytics subscription offering, had little to no false alerts in motion detection. Nuisances like lighting changes, shadows, and flashing lights were not triggered by Nest Cam, which is a common surveillance camera problem as well as for previous Dropcam versions.

However, this is not a commercial video analytics solution, since it is effectively a closed system, only offers a single super-wide angle model, has no outdoor version and has a range of only ~10 meters (due to its 130° AoV).

On the other hand, this shows that a large determined software organization can quickly deliver a high-performance video analytics offerings. If and when they expand the product lineup, this could become a serious factor in the video surveillance market.

Nest claims the video analytic improvements derive from cloud-based processing of video, including:

Nest Cam has a magnetic base and 1/4" mounting screw base, which are both installation improvements upon the Dropcam Pro. Below is an image of the Dropcam and Nest Cam side by side:

However, with these changes, there are still some aspects of Nest Cam that have not changed since Dropcam, like the ability to save recordings locally to an SD card. There is also no outdoor model of Nest Cam nor a model with a tighter or wider FOV, and instead Nest Cam has the same FOV as Dropcam Pro (130°).

Lastly, while Nest has released a new smartphone app and web client, changes are mostly cosmetic. This also means that no attention was given to watching and searching multiple Nest Cam cameras at once, requiring users to either switch back and forth between cameras if on a tablet or smartphone or open multiple web tabs for each Nest Cam. Also, no exclusion or privacy zones can be configured with Nest Cam, which could be useful for eliminating nuisance alerts such as pets in a cage or a television screen with motion occurring on screen.

With Nest Aware being a big addition to Nest Cam, we tested the motion detection in a variety of scenes. Overall, there were little to no false alerts even though we were flashing lights, producing shadows, changing light levels rapidly and blinking lights. The only nuisance alerts we received was from movement on a television which would require us to position the camera so the television was not in the FOV.

In our office scene, blinking led lights in the dark did not trigger false motion alerts, and subjects ~40' and closer were detected. However, people moving around at the far end of the office were not detected, but that is most likely beyond the scope or range of a real use case for this camera.

In a real life residential setting, Nest Cam was able to detect motion of residents moving around the dining room and kitchen area ~35' from the camera. Subject entering and exiting the sliding door in the back were also detected. However, motion from the television in the scene would trigger motion detection, and this is where having a privacy or exclusion zone available on Nest Cam is beneficial.

In our warehouse scene, all movement in and out of the warehouse was captured, and cars driving down the parking lot past the loading zone were captured. Leaves blowing in the wind, cars on the far road or lighting changes from the warehouse door did not create a false alert.

Lastly, in our standard conference room scene, we were unable to create false alerts by turning the lights on and off quickly, creating shadows on the walls or waving a flashlight around on the walls. Test subjects were detected in both full light and darkness in any area here.

Lastly, we compared image quality of the 1080p Nest Cam against the 720p Dropcam Pro and also tested "Enhance Mode"

Enhancement mode does not seem to have been updated in Nest Cam, as the Nest Cam and Dropcam Pro look similar. Artifacting can be seen in our subjects face and test chart, with roughly the same level of detail viewable in both. 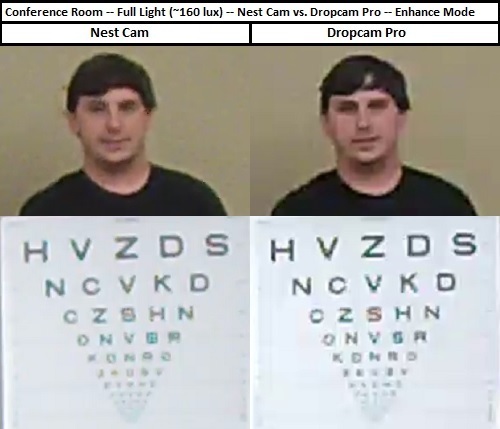 In full light, the increased resolution of the Nest Cam is able to read line 5 of our test chart, whereas Dropcam stops being able to discern characters past line 4. Our subject also appears clearer in the Nest Cam, with less artifacting than the Dropcam Pro. 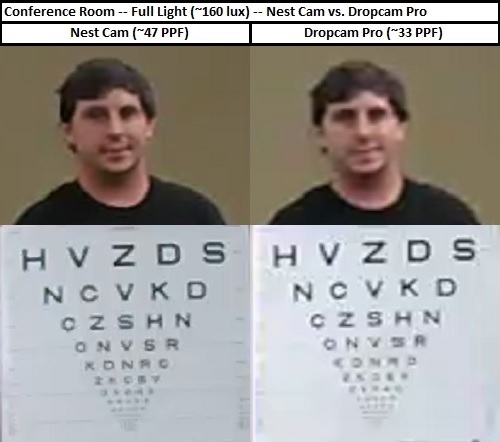 In low light, IR illumination is even but soft, with little to no central hot spot. Nest Cam has more artifacting present in this comparison, but we can also see lines ~2-3 on our test chart, as well as see our subjects hair and face with a little more clarity. 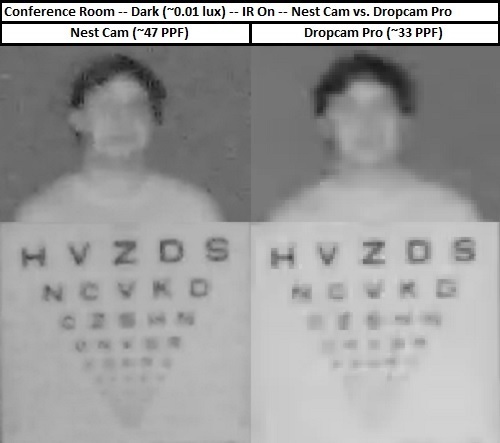 Remote Network Access for Video Surveillance Guide on Jul 27, 2020
Remotely accessing surveillance systems is key in 2022, with more and more...
Directory Of Consumer Security Cameras on Aug 16, 2017
The consumer camera segment continues to grow, with new startups and models...
Nest Cam IQ Tested on Jul 10, 2017
Nest has released their latest entry in their camera line, the Nest Cam IQ,...
Samsung SmartCam A1 Totally Wireless System on Jun 06, 2017
Hanwha is keeping the Samsung brand alive in consumer cameras with the...
Hikvision EZVIZ Amazon Scam Revealed on Apr 26, 2017
Hikvision is violating US Federal Trade Commission guidelines and Amazon...
Hikvision Ezviz Mini 360 Plus - $80 Autotracking Camera Tested on Feb 21, 2017
Autotracking, integrated IR, local storage, full HD, cloud access: $80. That...
VPNs for Video Surveillance Guide on Feb 07, 2017
Remote access in surveillance networks is a key cyber security and usability...
ADT Launches Canopy - Professional Monitoring For DIY Devices on Jan 19, 2017
The intrusion industry has criticized DIY security systems for...
Geovision Launches Direct Cloud Offering on Jan 18, 2017
Add cloud, subtract integrator. Geovision has launched myGVcloud [link no...
Nest Cam Outdoor Tested - Analytics Strong, Installation Weak on Sep 23, 2016
After years of claiming an outdoor model was "coming", addressing their...
Hikvision Cloud Service (Ezviz / HikConnect) Tested on Aug 05, 2016
Hikvision has built out cloud services for their cameras / products,...
Nest Announces Outdoor Camera With Numerous Flaws on Jul 14, 2016
NEST CEO was ousted / resigned after strong criticisms from Dropcam's...
Americans Vastly Underestimate Being Recorded on CCTV on May 24, 2016
Americans vastly underestimate how often they are recorded on CCTV, by a...
360° Motion Detection Camera Tested (Zmodo Pivot) on May 18, 2016
The Zmodo Pivot trumpets "motion detection in 360 degrees", claiming to...
Ranking Video Analytic Architectures on May 13, 2016
Video analytics may be implemented in a number of fundamentally different...
The Brooklyn Access Startup: Kisi on Apr 12, 2016
Straight from the hipster startup hotbed of Brooklyn comes a new IP access...
Dropcam and Nest CEOs Fight, Alarm System Coming on Mar 24, 2016
The Information, a subscriber only Silicon Valley technology site,...
Mega Chinese Electronics Manufactuer Xiaomi Yi Camera Tested on Feb 05, 2016
Xiaomi's revenue is 4 to 5 times larger than Hikvision's. Only in business...
Face Recognition Camera Tested (Netatmo) on Jan 29, 2016
Can face recognition make home security "better"? That is the bold claim from...
Ex-Googler Startup Camio Cloud Video Tested on Dec 16, 2015
Two ex-Googlers, one who was a Director of Product Management and another who...
Testing Smart Home PTZ (Remocam) on Dec 03, 2015
The consumer cloud video market is dominated by wide angle, fixed cameras...
Angelcam Cloud Video Tested on Oct 13, 2015
With the cloud getting more and more hype plus with early market leader...
Testing Petzi, The Pet Cam That Shoots Treats on Aug 14, 2015
Do you love dogs? Do you love the Internet of Things? Then we have a...
Google / Nest is Destroying Dropcam on Aug 10, 2015
Wow. The most popular consumer camera has suddenly become one of the most...
Comments (15) : Subscribers only. Login. or Join.