Why would one of the biggest VMSes get into Voice over IP?

That is the big question as Genetec has announced Sipelia, a "communications management" module for their Security Center platform, running a dedicated SIP server and integrating intercom calls with video and access.

In this note we review what SIP is, Genetec's implementation, and how it applies to the security/surveillance market.

SIP stands for Session Initiation Protocol and is used in telephony for voice and video calls over IP. SIP is used by some business phone systems for call setup, and also by some instant messaging programs for video calls, though proprietary protocols are often used as well. It most often uses RTP (Real Time Protocol) for voice and video, and TLS for encryption. 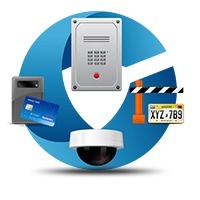 In previous releases, Genetec included support for SIP intercom devices from Commend and Stentofon, showing calls from these stations as system events and allowing operators to respond directly from the Security Center client. However, SIP was supported via a third-party add-on server and implementations handled by the professional services group, not offered as a modular feature.

With the introduction of Sipelia, Genetec has embedded the SIP server into Security Center, added as a role, making it an official optional module similar to Plan Manager or Mobile Server. This is intended to simplify deployment, instead of integrating to a third-party server, and make connection and operation of devices more fluid in Security Desk.

Sipelia pricing is not yet available (expected in the next 30-60 days) but will be licensed similar to cameras, with a base server package and connection licenses per station, as well as connections to external servers. Advanced licenses allow failover and audio recording.

Sipelia officially supports SIP intercom devices from Commend [link no longer available], Stentofon, and Castel in this release. Unofficially, other standard SIP devices (intercoms, phones, emergency call stations, etc.) may be used, but with limited tech support from Genetec. Official integration requests for other systems depend upon project opportunities.

Note that this SIP license is for audio only. Video from stations with on-board cameras must be licensed and configured separately.

Why a SIP Server for Surveillance?

Integrating this SIP server via Sipelia has several advantages:

These advantages are most likely beneficial only in a few markets.

Applications such as multi-tenant buildings, industrial, or small commercial facilities generally do not have large numbers of intercom call stations, making them less likely to see benefits to Sipelia.

Genetec Security Center 5.9 Release Examined on Feb 06, 2020
Genetec released the next major version of Security Center, less than a year...
Zenitel/ Stentofon Turbine IP Intercom Tested on Aug 06, 2018
IPVM has published reports testing an Axis door station and a Hikvision door...
Genetec Mission Control Tested on Jul 13, 2017
Genetec continues to move up market with their Mission Control, "Decision...
IP Vs Analog Intercoms on Jun 20, 2016
Intercoms, even within physical security, are a niche. But Axis' acquisition...
Genetec Access Control Company Profile on Mar 02, 2016
Genetec is certainly best known for its VMS capabilities, but they have had...
Axis Introduces... An IP Horn? on Mar 27, 2015
Axis invented the IP camera.  [UPDATE 2017: IPVM Test Results on Axis IP...
Winners Losers Fall 2014 on Oct 13, 2014
We are all losers, IPVM included. The historically poor new releases for...
ASIS 2014 - 17 Manufacturer Tech Review on Sep 30, 2014
This long post recaps key findings from IPVM team members meeting with...
Fall 2014 New Products Directory on Sep 23, 2014
New releases are weak this year, and unfortunately, the trend does not appear...
Comments (2) : Subscribers only. Login. or Join.