One of the first to do this was Genetec, who now has a long history in both video and access. Indeed, they market their Security Center as a 'unified security platform' rather than 'just' a VMS or an access control system.

This chart displays how the platforms stack up against each other:

While we examine those points in the sections below, we also found these important:

Milestone will likely be less expensive for simple systems controlling 'typical' perimeter doors, but the limited hardware controller options will drive cost in systems with many single doors, large populations of users, or those with doors unable to be reached by cables or modified with standard access locks and readers. Genetec offers a wider range of controller / lock options, including wireless lever locks and potential retrofit compatibility with common controllers.

Milestone will be expanding its access control capabilities and, over time, this may make the matchup far more direct and competitive. At the end of the report, we review future plans for each manufacturer.

The goals of access management software include these four key features:

These points are the basis of our comparison. In the sections below, we cover each section and elaborate on how each platform handles the feature.

For this feature, the platforms are closely matched. The short videos below give a good demo of how closely video and access events are integrated in real time. First we demo Genetec:

Then take a look at Milestone:

In our setup, video latency was typically between 1 - 3 seconds, while access alerts and commands (ie: Lock/Unlock, Granted Access) was typically even less. Both platforms performed equally well and were responsive without lockups or hangs, and video latency is likely due to the physical network (>1400 miles) rather than underlying software performance.

Most users will find either option sufficient for manned operation. Both platforms support manual override (Unlock/Lock) control from the interface, the ability to playback recorded video events without losing active door status, and flagged/searchable access events.

Milestone's interface also includes a 'flyout feature', where the client can be minimized and the workstation used for other tasks, but a 'popup' appears when system activity occurs.  For a small site with multi-tasking operators or staff, this is a helpful feature. The video below gives a short demo:

In addition, two way intercom features are available in either platform and are dependent on hardware. Because Milestone currently (only) supports the Axis A1001 Door Controller, this application may actually be less expensive that the equivalent Genetec solution which requires and additional third-party intercom unit and licensing, until the time the A1001 is fully supported.

Adding Cameras: In both cases, combining door control and tightly integrating video management is the key feature. Pairing cameras with doors happen from Genetec's remote "Config Tool", where in Milestone it takes place in "XProtect Management Application". While Config Tool is part of Genetec's remote client, Milestone's is not. For Milestone installations, remote access to this management application is needed to register new controllers and associate them with cameras. If remote access is not possible or allowed, local server access will be needed.

Also, with Milestone, not all possible features are currently usable. Take photo ID integration for example: 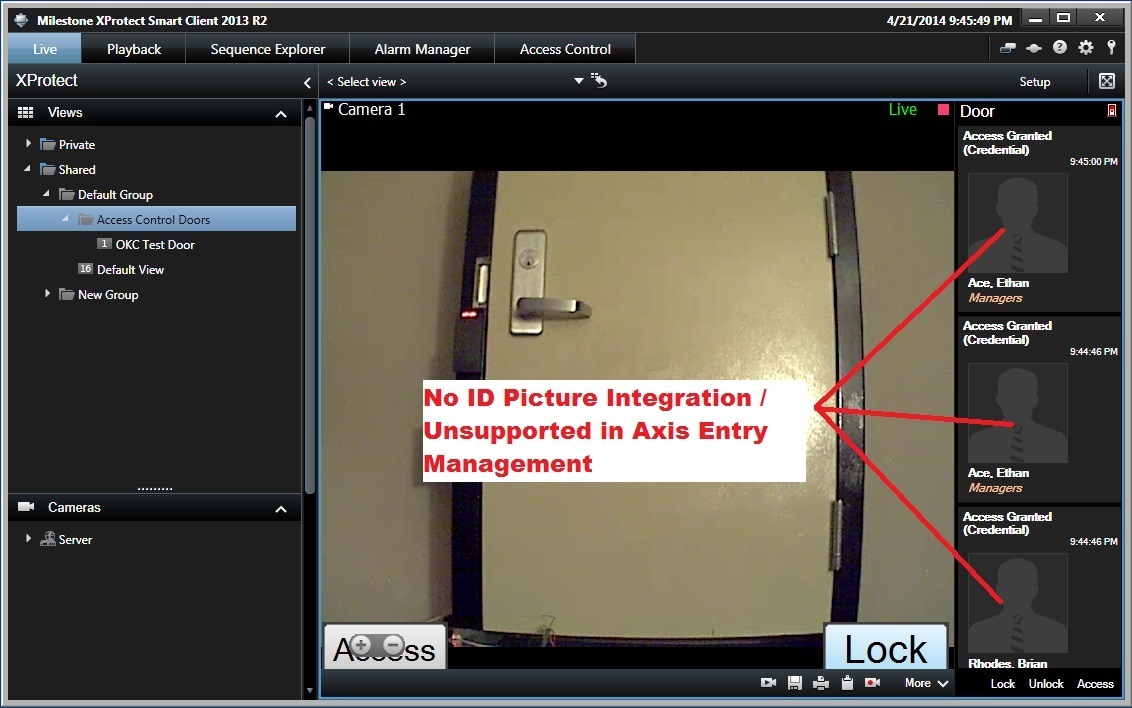 As we noted in our review, Axis Entry Manager does not support photo ID import and there are no images displayed when badges are used. There is no method of adding these images within Milestone and adding them into the Axis database

Unlike Genetec which has integrated management features, Milestone depends on a 3rd Party's core access platform for this functionality. While Milestone plans to add several platform integrations, the system currently integrates only with Axis Entry Manager [link no longer available]. Milestone's Smart Client redirects users to the other software to make most system changes. In the video below, the process of making these changes involves clicking the 'Entry Management" button:

This process reveals the relative superficiality of Milestone's access platform as more primary user interface, not access platform. While Genetec stands as a full 'access management' application, Milestone's offering is essentially the front-end that ties video and access events into a single place. Additional management tasks like:

cannot be changed in Milestone's module and must take place outside the application. In contrast, Genetec's features can all be accessed within the 'Config Tool' client without exiting Security Center. The images below help illustrate the difference: 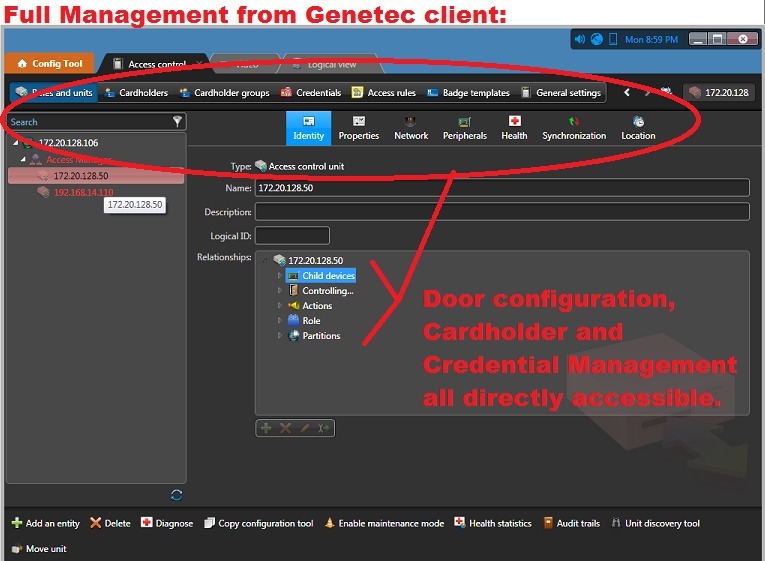 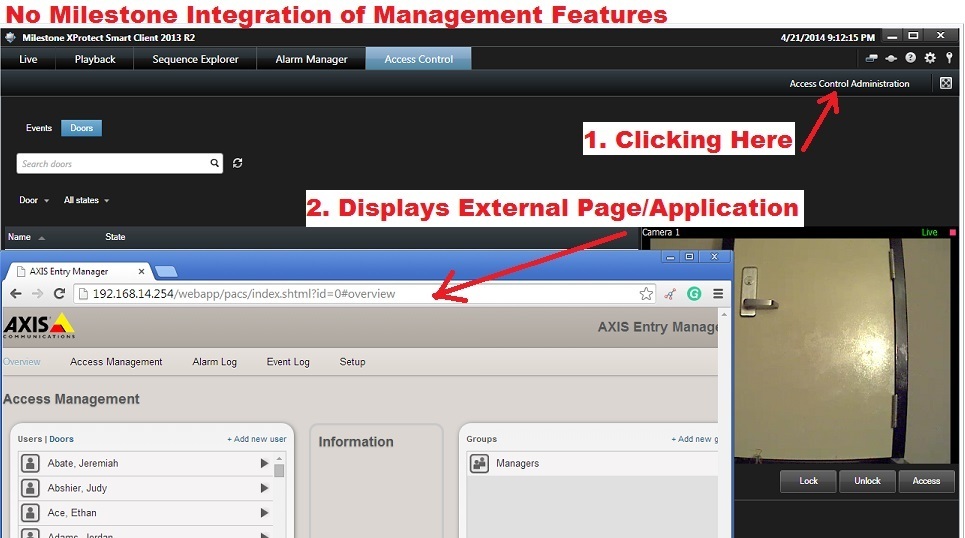 Easily changing or adding details like a new user, when a user's card is active, where it can be used, and what particular credential they are issued is routine inside Genetec, but is a cumbersome aspect of Axis Entry Manager, and by proxy Milestone Access Control. Not only are granular data controls like searching or grouping users together cumbersome, they take more time the bigger the population of records become. While Genetec's database is supported on the server, Milestone's database is stored on the A1001 controllers.

Another notable difference between the two offerings is seen in Badge Printing support. While Genetec includes a full-featured badge template and printing module, there is nothing available in the Milestone/Axis hybrid.  Any sort of photo ID system or auxiliary record database (ie: barcode or magstripe programming) will need a third party application if using Milestone.

The importance of system reporting depends largely on the user, being fairly insignificant to small deployments but growing to be critically important in large ones. For typical 'small system' reports like badge or door activity, alarms, or even time/date logs, either system is satisfactory.

Milestone includes a separate tab where access events and the corresponding video can be filtered and searched: 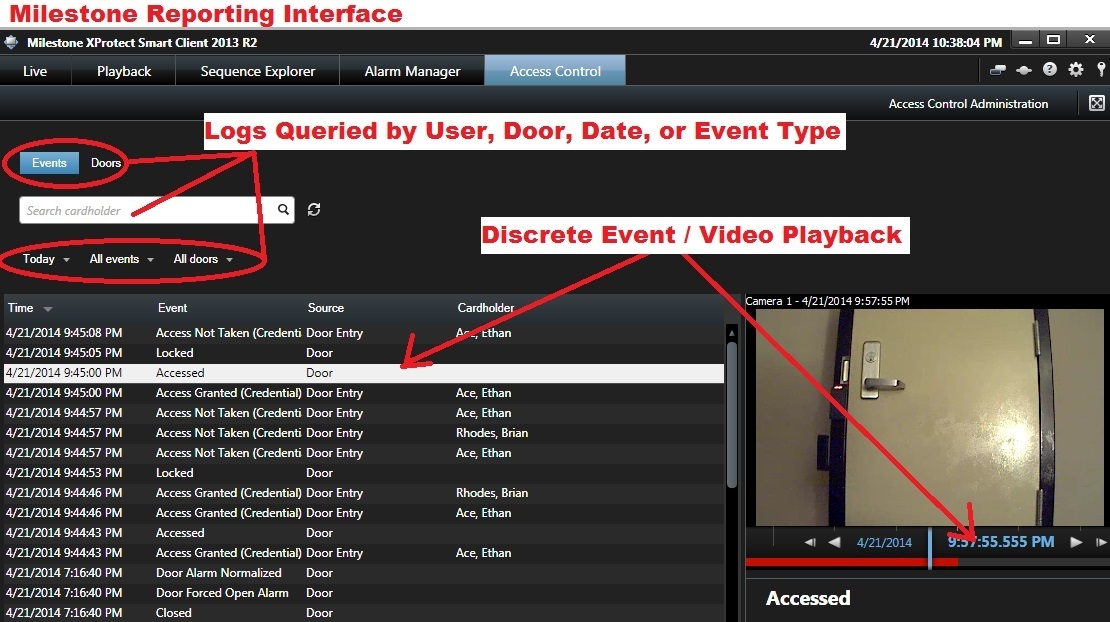 However, printing reports from the interface is not supported. While Milestone mentions this will be added in the next module update, it could not be done in our tested version. Limited report flexibility was a key weakness of Entry Manager, and while Milestone improves on making data more accessible, it still limits the data from being used by other applications.

In contrast, Genetec's reporting features are better suited for larger deployments and custom report development, allowing users to build data based on 'open ended' queries, user-defined events, and any returned data can be exported or printed for distribution: 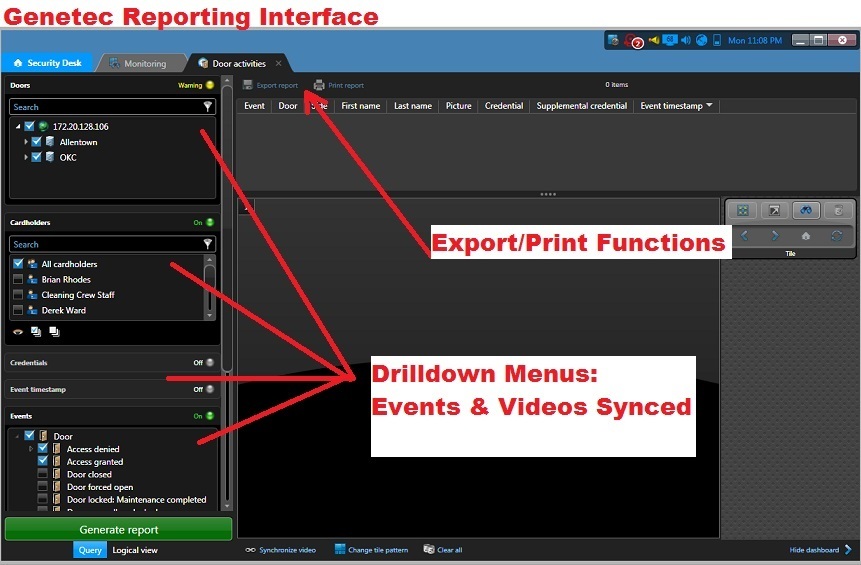 While not a key differentiator for most systems, because Milestone currently works with Axis Entry Manager, the current max number of doors it controls is capped at 66. However, the company expects to add other access systems in the next release that grows this population limit.

Genetec's Synergis can be scaled beyond 66 doors and essentially does not impose a similar limit.

Milestone's strength comes from it's low price. Access Control licensing is priced at ~$79 per door, although it must be purchased in two door bundles. Compared with Genetec's single-door license of $175, the software cost of Milestone is about half as much.

However, hardware options play a key role in the final cost of an access system, and Genetec's pricing may draw even or slightly less costly per door for larger systems. Genetec typically rebates the software license cost when they resell system controller hardware (although this is not likely with the Axis A1001) some types of controllers require purchasing a Synergis (SMC) controller interface module.

Given the range of options, Milestone will likely be less expensive for smaller systems but the hardware inflexibility will drive costs in larger systems, better served by a larger range of controller / lock options supported by Genetec.

Given the numerous ways IP based access can be configured, and the role network latency can play in operation, take note of how we connected devices from the door to head-end servers.

Our controllers were connected locally to our test door in Site A and then connected via VPN to the main application server located ~1500 miles away in Site B. The video cameras we combined in our tests were located in Site A as well. From there, our Remote Clients connected via the same network to the main servers.

The notable difference between tests comes in the companion door controller used. Currently, Milestone Access does not work with any controller except the Axis A1001, and the subsequent 'Entry Management' platform.

In contrast, Genetec works with a range of (controller-only) options from either HID or Mercury, but not the A1001, so for that system we used an HID Edge (non-EVO) controller.

Milestone claims a number of core updates will soon be available in the next version of Access Control. When we asked them for feedback on our 1.0 results, they mentioned the upcoming release would include these features not seen in the current 'soft release' production version:

"The 2014 version of XProtect Access Control Module offers the following new capabilities compared to the 2013 (1.0) that was soft-launched in the fall last year:

In addition to this, Milestone will announce support for five additional access control vendors with the release in May 2014."

For Genetec, the next change will include support for Axis' A1001 controller. Unlike Milestone that essentially integrates with the controller by way of 'Axis Entry Management' application, Genetec plans to fully support the hardware design natively from Security Center/Synergis with new firmware.

However, like we noted in our "7 Key Surveillance Trends for 2014" report, the incentive for Genetec to quickly adopt the device is muddy at best:

"Finally, unlike HID, which allows manufacturer partners to re-sell / mark-up HID’s products, Axis is selling [the A1001] through their traditional channels, cutting out access control manufacturers and reducing their incentive to promote it."

At the current time, Genetec is mum on the actual start of support for A1001 controllers, telling us only that "We are validating the Axis A1001 integration in the field on a few beta sites" and "The plan is to get it out during Q2 2014."

Kantech EntraPass Tested on Apr 21, 2021
Advanced feature access control systems are typically restricted to dealers...
Genetec Mission Control Tested on Jul 13, 2017
Genetec continues to move up market with their Mission Control, "Decision...
Access Control Integration Statistics 2016 on Dec 13, 2016
When it comes to connecting access control with other security systems,...
Genetec Access Control Company Profile on Mar 02, 2016
Genetec is certainly best known for its VMS capabilities, but they have had...
Exacq Adds Access and Intrusion Integration on Jan 07, 2016
PSIM for the price of a VMS? Exacq continues to expand its capabilities, now...
Milestone XProtect Access 2016 Release - New Features, Major Price Drop on Dec 15, 2015
With continued video surveillance price pressure, access is getting more...
Avigilon Access Control Tested on Jun 22, 2015
Avigilon aims to deliver an end-to-end solution of video surveillance and...
Video Insight Gives Away Access Control Free on Sep 24, 2014
Genetec has offered unified access and video for years and Milestone added...
Access Control Server Guide on Sep 09, 2014
Electronic access control systems need to be managed. The 'server' though can...
Milestone XProtect 2014 Tested on Sep 03, 2014
In this third entry in our ongoing VMS test series we provide in-depth...
Testing Genetec Security Center 2014 on Jul 23, 2014
This is IPVM's first in a series of all new, in-depth test reports on video...
Milestone Acquired by Canon on Jun 13, 2014
Industry insiders have been speculating about Milestone being acquired for...
Milestone Access Control 2014 Released on May 28, 2014
Milestone has announced an update to its first venture into integrated access...
Comments (24) : Subscribers only. Login. or Join.