Not since Axis public and prolonged agony with AVHS, has a major manufacturer bet as heavily as Genetec is now doing on the cloud.

Genetec is not giving up. Indeed, they are taking an aggressive 'cloud first' strategy more deeply integrating cloud services with its flagship Security Center platform adding Cloud Archiving, Cloud Cameras, and AutoVu Plate Reader Cloud in the past year as well as offering free camera channels and storage to attract users.

In this report, we test:

Though Stratocast 'standalone' has weak competitive positioning, the integration of cloud services, like adding on cloud cameras, archiving and LPR to their VMS / PSIM is valuable and uncommon. We believe the later will help differentiate Genetec for some large scale users that can take advantage of these services to enhance their systems.

This chart summarizes our key findings for each of Genetec's cloud features, with more detail below:

Stratocast has significant limitations compared to Security Center and other full blown VMSes:

Effectively, Stratocast offers a featureset similar to Axis Camera Companion 3, though with more complex setup, and a minimum MSRP of ~$6/camera (vs. free).

Federating Stratocast cameras to Security Center effectively eliminates most of the limitations discussed above.

Cameras are added quickly and easily, simply entering server, user, and password, with Cloud Cameras operating similar to on-site cameras, with a slight increase in load time (~1-2 seconds) on live viewing and playback.

Cloud Archives integrated almost seamlessly with on-site video archives, with the lack of thumbnails and slight increase in load time the only noticeable difference. However, users should beware of upload bandwidth speeds when using Cloud Archives, as there is no means to throttle their speed and it may choke user's internet connection.

However, the short list of compatible cameras (limited to <10 models from Axis, Panasonic, and Sony) and low vehicle speed (<15 mph specified) may be issues for some users.

MSRP of these services is as follows:

Note that all Genetec users with a valid SMA have access to some free cloud cameras and archives. Those looking for more details should see Genetec Adds Free Cloud Cameras / Storage.

We review the basics of both of these interfaces below:

The "View" section of the end user interface (represented by the camera icon) is used for live and archived viewing and basic search. Note that the "Investigate" tab, represented by the magnifying glass icon contains a list of bookmarks, not search functions, counter to most user VMS UI's.

Notably, there is no multi-camera search or export. Switching a camera to playback mode in a multi-camera view switches the user to a single camera screen. Users must search and export each camera individually, which may be tedious if multiple cameras are involved in an incident.

Cameras must be added in the integrator interface of Stratocast, and require installers to enter the serial number and OAK (owner authentication key) of each camera. Once added, Stratocast sets up the connection, a process that takes 2-3 minutes per camera, then users select a recording plan, resolution, and name the camera.

There is no way to add multiple cameras at once or search the local network for cameras to be added, so multiple-camera projects may be a time-consuming process.

This process is shown in this video:

Note that the serial number is the MAC address of the camera and may be easily retrieved via a sticker on the camera itself or in its web interface. However, the OAK is only included in the paper documentation included with each camera and may be easily lost or thrown out during installation. Users may contact Axis or Stratocast support to retrieve the OAK for these cameras.

Stratocast cameras may be Federated to Genetec Security Center by simply creating a Federation user and entering the automatically generated server name, user, and password.

Cloud cameras appear no different than local cameras, with a slight increase in load time (3-4 seconds vs. 1-2) the only visible difference. Cloud camera video may be kept in Stratocast or archived locally using SC's Auxiliary Archiver role.

In this video we walk users through creating the Stratocast Federation and viewing cloud camera video:

Cloud Archives requires a small plugin on the Security Center server and uses its own Config Tool separate from the main SC application. Using this config tool, users set up the maximum age of local archives, with video older than this setting uploaded automatically to the cloud.

Note that there is no way to throttle bandwidth of Cloud Archive uploads and it may impact internet speed performance. In our tests, upload bandwidth was routinely 4-5 Mb/s. Genetec explained that they have had questions about this lack of bandwidth throttling and it may be added in a future release.

While cloud archive operation is generally seamless, with video searched and viewed the same was as local archives, note that thumbnails are not provided when using video stored in the cloud, unlike local video. Aside from this, functionality is effectively similar.

Plate Reader Cloud integrates with Security Center via an add-on plugin. Once installed, users associate a supported model with the plugin as the LPR camera, with a second camera optionally used for overview. Only supported

Reads may optionally be triggered based on crossline analytics (when a vehicle reaches a specific point) or digital I/O (when a ground detection loop or IR beam is triggered by a vehicle) or via no conditions. Plate Reader Cloud also includes some of the analytics found in Genetec's latest AutoVu releases, such as state of origin and vehicle make. However, direction of travel and speed estimation are not included.

The time between a plate being visible and the read event occurring in Security Center was ~1-2 seconds, similar to or slightly slower than a full-blown AutoVu Sharp system.

We found no issues reading plates day or night at 15 MPH or under using an Axis P3364 with Genetec's recommended settings. Plate state for PA, NY, and NJ was properly read nearly in nearly 100% of reads, as well. Accuracy at 30 MPH, double the 15 MPH specifications, was solid as well, though plate state of origin became inaccurate. 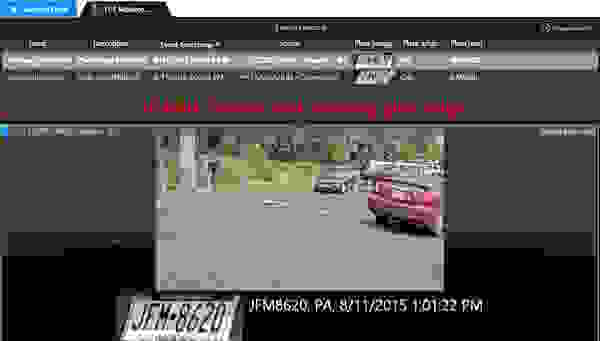 These are the software versions used in this test:

Cybersecurity for IP Video Surveillance Guide on Jan 24, 2022
Keeping surveillance networks secure can be a formidable task, but there are...
Directory of 70+ VSaaS / Cloud Video Surveillance Providers on May 17, 2021
This directory provides a list of VSaaS / cloud video surveillance providers...
Genetec Stratocast VSaaS Tested on Sep 05, 2019
The VSaaS market is rapidly expanding in 2019, with Verkada, Meraki, Eagle...
Genetec Security Center 5.8 Tested on Mar 19, 2019
Genetec has released Version 5.8. This comes after a wait of more than a year...
Directory Of 120 Video Management Software (VMS) Suppliers on Aug 30, 2018
This directory provides a list of Video Management Software providers to help...
JCI / Tyco Security Acquires Smartvue on Apr 03, 2018
Johnson Controls (Tyco Security) has acquired cloud provider Smartvue (see...
Avigilon Acquired By Motorola Solutions on Feb 01, 2018
Avigilon has finally been acquired. The acquirer is Motorola Solutions, a...
Genetec Launches Cloud Access Control (Synergis SaaS) on Sep 21, 2017
Genetec's cloud everything expansion continues, with their announcement of...
Genetec Mission Control Tested on Jul 13, 2017
Genetec continues to move up market with their Mission Control, "Decision...
Comcast SmartOffice (Using Genetec and Axis) Profile on Mar 29, 2017
Comcast has more than 20 million subscribers and $80 billion in revenue. Now...
Genetec Favorability Results 2017 on Jan 16, 2017
In the race to the bottom and flight to 'solutions', Genetec has taken a...
Genetec Lower Cost Sharp V LPR Camera on Nov 23, 2016
Genetec has announced the latest offering in their AutoVu Sharp line,...
Genetec Access Control Company Profile on Mar 02, 2016
Genetec is certainly best known for its VMS capabilities, but they have had...
Favorite VMS Manufacturers 2016 on Feb 16, 2016
With the Favorite Camera Manufacturers 2016 and Worst Camera Manufacturers...
Top 5 Video Surveillance Product Advances Going Into 2016 on Dec 31, 2015
Here are the 5 product areas that have had the most meaningful product...
Milestone XProtect 2016 Released - Aims to Dominate The High End on Dec 16, 2015
After skipping a 2015 release (and upsetting some partners), Milestone has...
Milestone 'Free' Takeover of OnSSI Accounts on Oct 02, 2015
It's getting nasty. Last month, we reported how Milestone and OnSSI were...
Genetec Cloud LPR Examined on Apr 10, 2015
The cloud is yet to be a significant factor in video surveillance. Now,...
Comments (10) : Subscribers only. Login. or Join.