License plate video is one of the most requested elements of video surveillance.

IPVM has done many tests on license plate cameras, including the:

Now, we are adding a new test on Genetec's AutoVu, consisting of their Sharp XGA camera integrated with Security Center.

Inside, we have 20+ minutes of videos. Watch the 1-minute preview / excerpt below:

We tested Genetec's LPR on a busy roadway to see how it performed, covering these topics:

The MSRP of Genetec's Sharp camera and included accessories totals ~$7,000, plus another ~$2,000 in licensing costs for AutoVu server, totaling about $9,000 for a single camera system.

AutoVu provides high accuracy, Security Center integration, and novel (though limited) analytic features, though its high price pushes it beyond many users' budgets. However, users looking for top performance in critical applications such as city surveillance, critical infrastructure, or high-end corporate systems should consider AutoVu.

Finally, those seeking VMS integration for platforms than Genetec's own Security Center should look elsewhere. The AutoVu Sharp camera may not be used with other VMSes, and there are currently no third-party VMS integrations of LPR data.

The Sharp XGA is a dual-imager dedicated capture camera. The camera has only a single multipin connector, and no parts are user serviceable.

This video reviews the physical features of the Sharp:

The Sharp camera requires very little configuration when added to a Security Center system. The onboard web interface does not include typical options, such as exposure, CODEC, or other settings commonly seen on standard cameras. Instead, it is mainly used for network addressing and analytic setup such as plate context, vehicle speed, and advanced analytics.

This video reviews the web portal of the Sharp camera:

As part of Genetec's Security Center suite, AutoVu is fully integrated into the Security Desk client, for both live and archive use. Reads and hits appear as events, along with video, alongside cameras and access control devices, and may be searched in the same way.

This video reviews the operation of AutoVu via the Security Desk client:

Note that the two cameras of the AutoVu Sharp (LPR and overview) have different resolutions and fields of view. For example, in our testing, we used two cameras, one with a 16mm lens and one with a 25mm lens for the LPR camera. Both used wider angle 8mm lenses for the overview camera.

This image shows the field of view of each:

Genetec specifies the Sharp may be mounted up to 30° vertically and 50° horizontally from the target at maximum. However, they recommend angles be kept as shallow as possible. This may require moving the camera further back from the read area and using a longer lens option (8, 12, 16, 25, 35, and 50mm lenses are available).

The distance to target varies depending on which lens is used, from about 20' in wider 8mm options to about 100' using 50mm.  The read area for the two cameras we used during testing (16 and 25mm) is shown below:

In the example on the right, the stacked US characters are simply not read at all. This is preferable to characters read wrong, however, as they may still be added to hotlists, either using only the unstacked characters, or using wildcard characters (* and ?).

A second, less common issue was reading vehicle lettering as a license plate. Genetec explains that in some cases where characters are approximately the same height as plate characters, and at the right height in the FOV, they may be read as a plate. 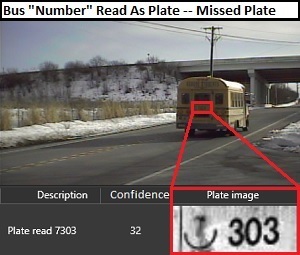 Finally, and least common, were cases where characters were simply not read properly. This is shown in the example below, and likely due to excessive dirt or debris on the plate, effectively "smudging" the letters in the camera's view. 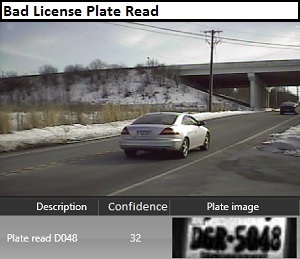 In their latest updates, Genetec released "Advanced Vehicle Analytics", including speed, direction, vehicle make, and state of origin. These analytics are added as annotation fields to each read, and may be displayed in live and search read results.

However, in Security Center 5.2, how these analytics may be used and searched is limited.

Genetec tells us search and alarms will be included in their upcoming 5.3 release.

This video reviews all of these analytics:

AutoVu's speed analytics were accurate to within 1-2 miles per hour in our tests once properly calibrated. However, since the camera calibrates speed using the relative size of the license plate, small changes in field of view can drastically change speed detection accuracy.

For example, in the righthand image below, the camera has been angled down and to the right after calibration, a total of only a few degrees. However, this small change results in the ~40 mph truck being read 127 mph.

Relative motion analytics were also accurate, simply reflecting whether the car was moving toward or away from the camera. Since the field of view of the LPR camera is tight and at a shallow angle to the road, only these two directions are determined, and only on vehicles which register a read. Other objects in the field of view of either camera are not analyzed.

In our tests, license plate state of origin was read only one time, and only in our interior lab setting, not field testing. Genetec informs us that the state of origin portion of the license plate must be IR reflective in order to read. Despite PA/NY/NJ being on their list of reflective plates, the state was still not read, in most cases simply a blur as seen below. 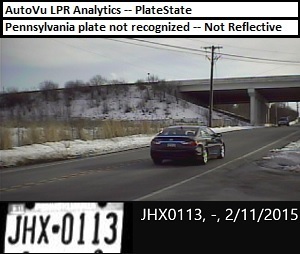 Vehicle make was also inaccurate, read in 30-40% of vehicles. 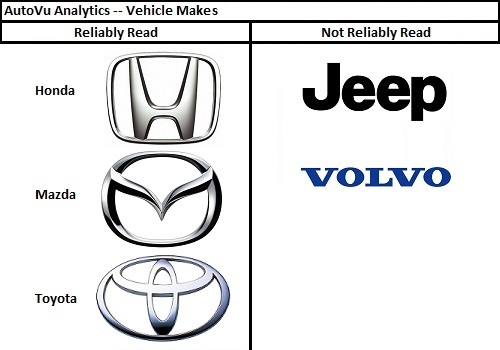 This test used the following hardware and software versions:

Turing LPR And Advanced Vehicle Analytics Tested on Dec 15, 2021
Turing has introduced LPR and vehicle make, color, and body type analytics to...
Vivotek LPR Camera Tested on Apr 15, 2020
Vivotek has historically sold license plate capture cameras but not LPR. Now,...
Genetec Security Center 5.8 Tested on Mar 19, 2019
Genetec has released Version 5.8. This comes after a wait of more than a year...
S2 Access Control / 'Unified Security Management' Profile on May 08, 2018
In our 13th access control company profile, we examine S2 Security's Netbox...
Hikvision LPR Camera Tested on Mar 26, 2018
Hikvision has expanded into the LPR market, claiming up to 99% capture rates,...
Directory of 61 LPR / ANPR Providers on Feb 21, 2018
License Plate Recognition / Automatic Number Plate Recognition are a type of...
Top Used License Plate Capture Cameras on Aug 21, 2017
Capturing license plates is a common video surveillance application. But...
Genetec Favorability Results 2017 on Jan 16, 2017
In the race to the bottom and flight to 'solutions', Genetec has taken a...
Genetec Lower Cost Sharp V LPR Camera on Nov 23, 2016
Genetec has announced the latest offering in their AutoVu Sharp line,...
Ranking Video Analytic Architectures on May 13, 2016
Video analytics may be implemented in a number of fundamentally different...
License Plate Capture 4K Test on Jan 11, 2016
License plate capture is one of the most popular surveillance applications....
New Products Spring 2015 on Apr 12, 2015
After very poor new releases in 2014 (see Spring 2014 and Fall 2014...
Genetec Cloud LPR Examined on Apr 10, 2015
The cloud is yet to be a significant factor in video surveillance. Now,...
Milestone LPR Tested on Mar 31, 2015
How well does Milestone's LPR work? Milestone's LPR supports off the shelf...
Comments (10) : Subscribers only. Login. or Join.