Gain control is a critical, though often overlooked, factor in low light surveillance video. It is generally only noticed when the negative side effective of aggressive gain levels are seen, namely noise / snow on screen. The picture below, from one of our parking lot tests, is a prime example of this problem: 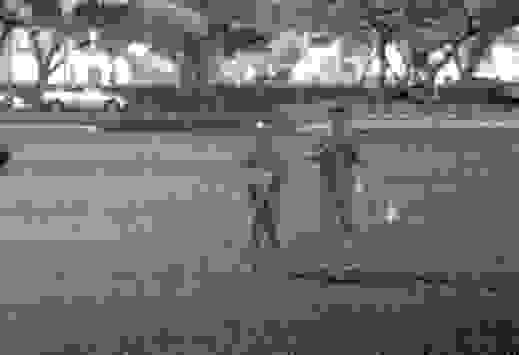 Clearly, the noise is a problem and ideally you would want to remove it. This raises important questions about how to use gain control effectively.

In the introductory video below, we provide a real-time demonstration of gain control:

To learn more, we conducted a series of experiments in a variety of scenes. For each scene, we captured video, images and bandwidth consumption. Here are the scenes we tested:

Our testing was done across 3 HD cameras from Avigilon, Axis and Bosch to see a range of performances.

Inside the Pro section, we share our results and answer the following key questions:

Let's start with the key findings of our tests:

Below is a video that shows and explains our key findings with references to our test video and images:

Gain is controlled typically in one of three approaches:

The video below provides demonstrations on how to use and optimize gain using Axis and Bosch cameras as an example:

Gain Not Comparable Across Manufacturers

Beware, even if 2 manufacturers list the same gain levels (e.g., 20dB or 35dB), it does not mean they are the 'same' or deliver the 'same' low light performance. How they add gain / process video can widely vary.

You may be aware of manufacturers marketing super low light performance, with names like LightFinder, LightCapture, Stellar, DarkFighter, etc. All of these are using advanced forms of gain control to improve low light image quality. However, like 'traditional' gain control, they tend to increase bandwidth consumption further (though by how much varies depending on the noise reduction techniques they use). Super Low Light does not, however, require IR nor special imagers. The special functionality comes from advanced gain control / image processing.

They are not all equal and they cannot be compared abstractly. You can review our tests, e.g., Super Low Light vs Integrated IR Shootout and individual camera reports to see low-light performance.

To get a sense of how gain impacts overall video quality, the below comparisons show the same scene with the same lighting with different gain levels. The top image has the maximum amount of gain with each descending image at a lower gain level. Take a look:

In the above scene, almost anyone would agree that the top image is the best. With this dark scene, high gain becomes critical to make anything out. Indeed, even with 3dB of gain, the scene is pitch black.

Let's contrast to another slide below with 40x the amount of light. Take a look:

Which do you think is better? This one is certainly much more complex than the first slide with sub 1 lux lighting. In this scene, with 20 lux, the image with maximum gain is somewhat dark and suffers from a lot of visual noise. The images actually look better with less gain, though one could debate which of the low gain images were best. As a point of reference, we estimate this camera's automatic gain setting for this scene to be about 6 to 9 dB.

The same tradeoffs with gain variance occurs with color mode. The big difference, as the comparison below shows is that with color, gain is needed more even at higher light levels. By default, at 4 lux, all 3 cameras automatically adjusted their gain control to maximum levels. You can see this with the clear visible noise across each image. 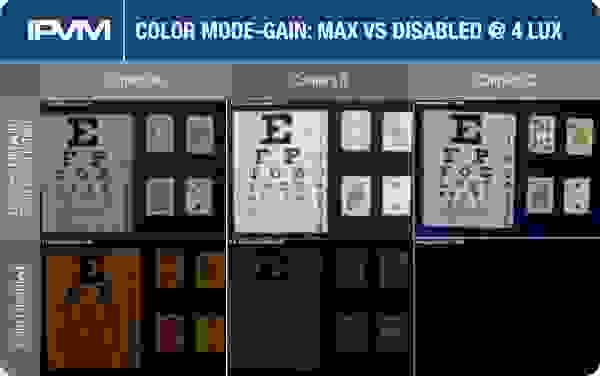 By contrast, with gain disabled, the images are significantly darker and the colors are more subdued (Bosch), missing (Avigilon) or altered (as in the case with the Axis camera).

One of the most oft cited problems of low light surveillance is increased bandwidth consumption. Perhaps the most interesting finding of this test is the strong correlation of gain levels and bandwidth, regardless of the mode of the camera or the light level of the scene.

Below is a chart that depicts the relationship. The numbers are based on .5 lux B&W mode for Axis though the same pattern was displayed with higher light levels, color mode and the Avigilon camera. 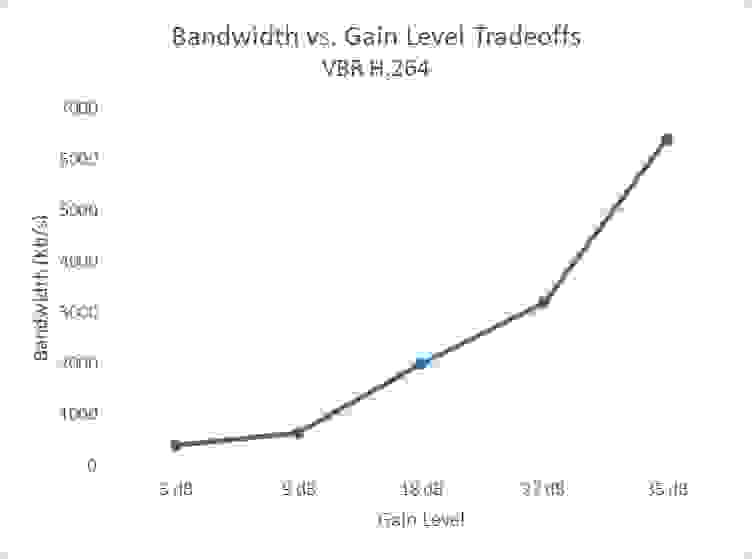 The bandwidth penalty becomes increasingly steep as gain levels increase. We have noticed some cameras with very high noise and very high bandwidth consumption in low light. This looks to be an outcome of manufacturer choosing aggressive maximums for automatic gain control.

Based on this, we recommend you check your low light bandwidth consumption. If it is quite high, see if a gain control cap exists and try lowering it from the manufacturer's default maximum.

The other option is to use MBR. The image below shows our test results of taking a scene with maximum gain and limiting its bandwidth to 1 Mb/s. The overall image quality is practically unchanged but at a fraction of the bandwidth. 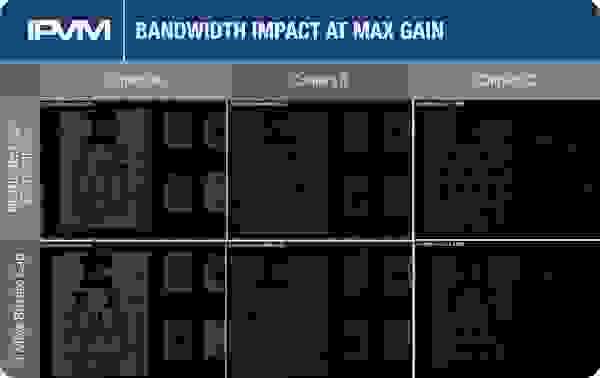 Finally, here is a summary comparison of gain across light levels, gain settings and cameras tested. Take a look and compare the differences yourself. Perhaps the most interesting element we saw here was that with bright light (300 lux at the bottom of the comparison), the Avigilon appears to provide the sharpest image details. However, with low gain, Avigilon's image essentially disappears. 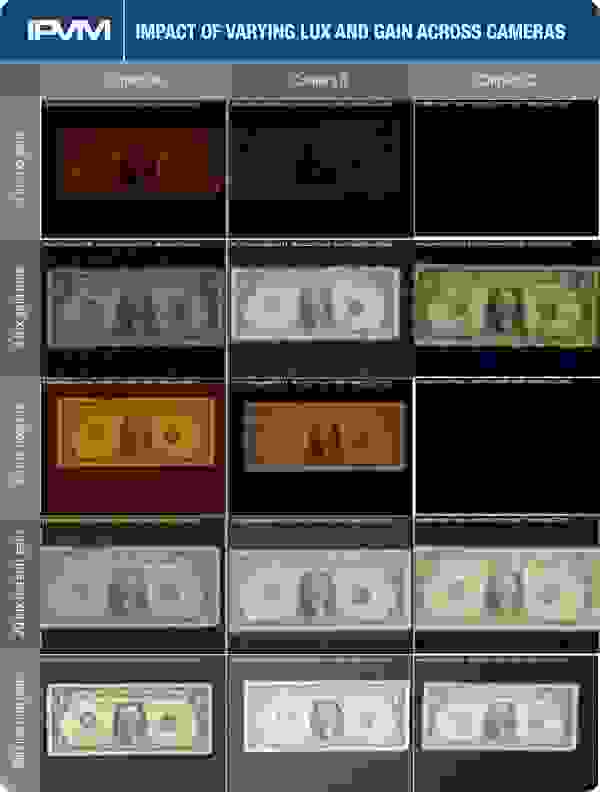 DNR aims to reduce digital noise by processing individual frames (2 dimensional) or across a series of frames (3 dimensional) to identify scene changes in order to determine what is and is not noise. By reducing overall noise in the image, bandwidth requirements are also reduced, sometimes dramatically.

For example, taking a sample of cameras from in our bandwidth vs. low light and DNR tests, bitrates increased by nearly 15x from day to night without using DNR (an average of 10 Mb/s vs. ~0.9 Mb/s). Turning DNR on, these spikes dropped to ~3x (~3.24 vs. ~0.9 Mb/s), still substantial, but much improved versus not using DNR.

However, users should be careful not to apply too much digital noise reduction, as high levels can create blur on moving objects, similar in appearance to slow shutter.

Quiz Yourself on AGC / Gain

The PPF / PPM Video Surveillance Guide on Dec 16, 2020
Pixels per foot / Pixels per meter is the most fundamental and valuable,...
Super Low Light Surveillance Guide on Aug 06, 2020
Historically, low light performance of megapixel cameras was terrible,...
Bandwidth vs Low Light Shootout - Avigilon, Axis, Bosch, Dahua, Geovision, Hanwha, Hikvision, Uniview, Vivotek on Feb 08, 2019
Nighttime bandwidth spikes are a major concern in video surveillance, but do...
Testing Bandwidth Vs. Low Light on Jan 16, 2019
Nighttime bandwidth spikes are a major concern in video surveillance. Many...
Smart Codec Guide on Feb 01, 2018
"Smart Codec" was once seemingly a marketing buzzword, but in 2023, almost...
Avigilon Real Time Exposure And Gain on Feb 24, 2015
Knowing how exposure and gain impact image quality, bandwidth, and camera...
Tested: Lowering Bandwidth at Night is Good on Dec 29, 2014
Bandwidth spikes in low light are commonplace, with increases of 300 to 500%...
Testing Smoked vs Clear Domes on Jun 19, 2014
The best way to conceal where a camera is pointed is to use a smoked dome....
IPVM Seminar Poll Results on Sep 24, 2011
At our first ever IPVM seminar, we held a number of real time polls asking...
The Truth About IR Lighting and Bandwidth on Aug 13, 2011
One of the industry's top growing myths is that IR illumination massively...
Comments (13) : Subscribers only. Login. or Join.