"Wireless links in no time" claims Fluidmesh with their new FM Ponte point-to-point, with pre-configuration and technical support their big differentiators. But are these claims enough to divert integrators from favorite lines such as low cost leader Ubiquiti? In this note we take a look at the FM Ponte, cost and support claims, and potential impact. 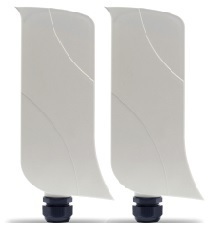 The Fluidmesh Ponte is intended for users seeking simple point-to-point links with minimal configuration required. It is based on their existing Volo platform, though simplified, with these key differences:

The Ponte has an integrated 33° panel antenna and a specified range up to 2 miles. No external antennas may be used. Power is via passive PoE, 12-24VDC, with no standard 802.3af support.

Given its target market, simple point-to-point deployments, the most likely competitors to Ponte are low cost wireless products such as Ubiquiti. Compared to Ubiquiti's similar form factor integrated antenna model, the NanoStation M5 (~$85 each, $170 per pair), Ponte is nearly 7x the price. However, there are key differentiators Fluidmesh claims over products such as the NanoStation:

The number one differentiator, according to Fluidmesh, is their support structure. Fluidmesh integrators receive unlimited phone and email technical support at no additional cost. By contrast, Ubiquiti support is by email or online forum only, with limited phone support. This may be especially important in applications the Ponte is intended for, as integrators looking for low cost PtP links may have limited or no wireless expertise.

Fluidmesh claims their MPLS based protocol, Prodigy, provides lower latency (below 1ms claimed) and surveillance optimized quality of service compared to typical 802.11 based radios such as Ubiquiti. Algorithms are optimized to change packet retransmission and priority based on surveillance specific needs such as I-frames and P-frames, PTZ control, etc.

The Ponte's 33°/16dBi panel antenna is narrower and higher gain than the NanoStation (45°/13dBi) providing longer range and better link quality. However, integrators could use Ubiquiti models such as the Rocket with external antennas for narrower beamwidth.

The Fluidmesh Ponte may be attractive to many integrators with limited wireless experience who may find other products with limited support (such as Ubiquiti) intimidating. Further, Fluidmesh's channel, traditional security rep firms and distributors, makes it more likely to be suggested to these integrators as part of surveillance projects, as most other wrieless lines do not have this representation.

However, those with wireless experience seeking the lowest cost PtP link possible will likely find other options more cost effective, such as Ubiquiti or Microtik, despite their relative lack of support.