FLIR is going after the home / consumer surveillance market with their FLIR FX. A few of the notable competitive features offered:

How does FLIR FX compare?

We tested Dropcam and FLIR FX head to head to better understand the tradeoffs. Below is a preview from the two side by side: 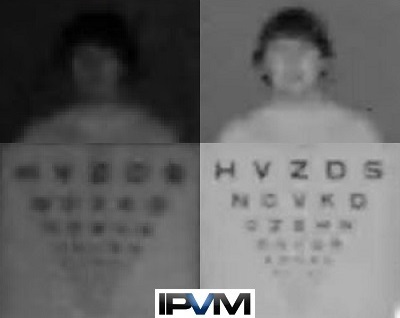 Though FLIR FX has a lot more features (like the built-in battery, outdoor housing, SD card support), FLIR FX's image quality and usability are moderately worse. On the usability side, the difficulty in searching through recorded video, the need to request Rapid Recaps, and the lack of a web client) are key issues that may be improved via software in the future.

Overall, the FLIR FX is competitive with some clear future advantages but with notable limitations.

Here is how the FLIR FX stacks up against key competitor Dropcam on major usability factors:

Other key points from our test include:

A free 30-day trial of FLIR cloud plus is included, which users can then opt to one of the following cloud options:

Setup is performed simply using a mobile device app, with no option to connect to the camera via PC or Mac. Users scan a QR code on the base of the camera using the FX app, and are walked through setup, a 5-10 minute process. Non-technical users used to smartphones and tablets, downloading apps, etc., should not find this process difficult.

The FLIR FX has a time-lapse feature called Rapid Recap, essentially BriefCam's Video Synopsis performed in the cloud. Users select a time frame (minimum of 1 hour, up to 12 hours depending on subscription) to be recapped, and the video is queued to be processed. Processing of a recap of several hours took 2-3 minutes in our tests.

In this video, taken on an Android device, we review the use of Rapid Recap:

Note that as with other video synopsis programs we've seen, objects may overlap, making review difficult in busy scenes. Additionally, there is no way to adjust the number of objects on screen at once manually, as there is in BriefCam. 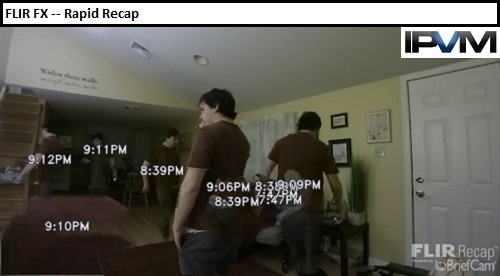 Opening the replay icon (resembling a VCR "play" button) launches the recordings list. Users may directly access motion clips, manual recordings, and Rapid Recaps which have already been processed from here. Note that no timeline view is provided, unlike Dropcam, and specific times may not be searched. 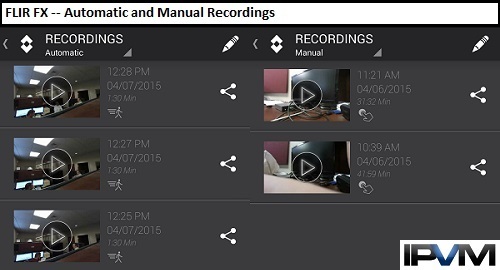 The FLIR FX app is simple to use, with live video streaming in a few seconds after selecting a camera. Few options are given, with two main buttons triggering manual recording, intercom functions, etc. 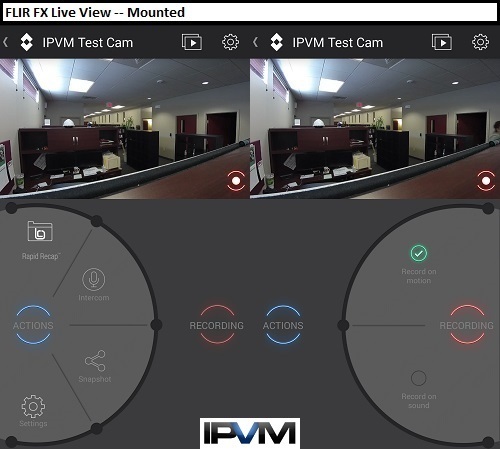 We tested the FLIR FX against the Dropcam Pro in our conference room scene in full light and dark scenes. Both cameras were shot using 720p resolution, although the FLIR FX camera can manually record video at 1080p resolution, and 4MP snapshots can also be taken. The test FOV can be seen below: 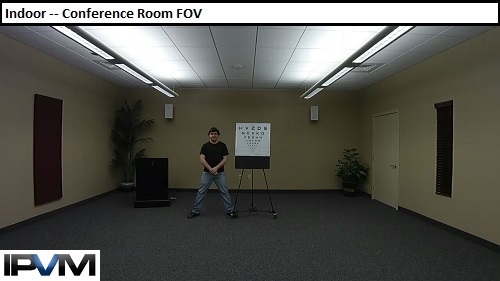 In full light, with our subject ~15' away from the cameras, PPF is ~31. The FLIR and Dropcam cameras are able to read lines 1-3 on our test chart, but reading text this small is unlikely to be required in the residential applications these cameras are intended for. Note also that the Dropcam's white balance and brightness result in a more vibrant image. 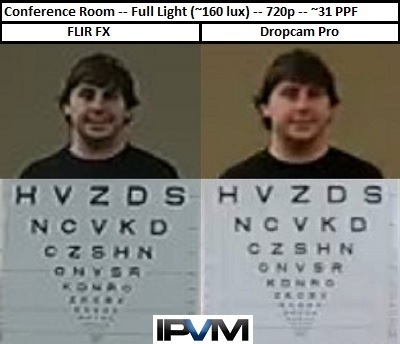 Given the poor IR illumination of the FLIR FX, our subject and chart are noticeably darker, with the Dropcam able to read lines 1 and 2 of our test chart given its stronger and more even IR illumination. 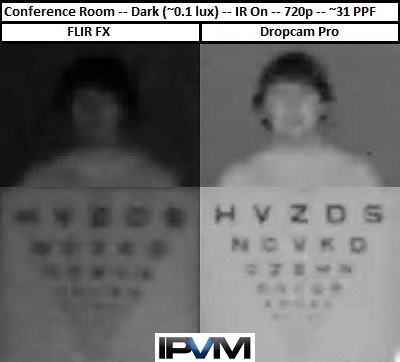 The IR illumination patterns for both cameras can be seen below. The FLIR FX has a narrow and weak IR pattern, while the Dropcam Pro illuminated the room more evenly. 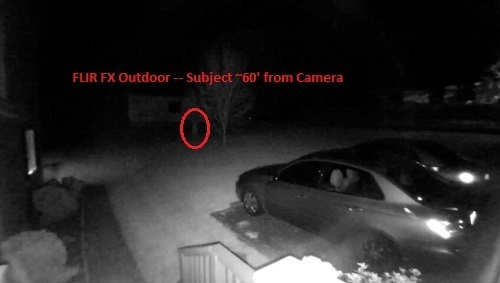 Users that disconnect the FLIR FX from the mount and carry it around similar to a GoPro. Doing so sends the camera into "Action Mode", essentially disabling the Rapid Recap and intercom capabilities. Below is an image of the live view and options of the FLIR FX while it is mounted: 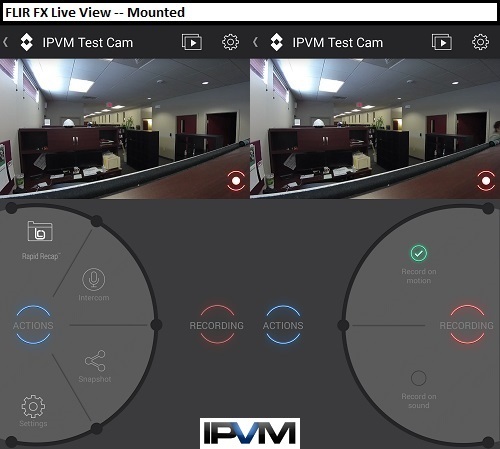 Below is the live view of the FLIR FX in "Action Mode". Notice how Rapid Recap and Intercom options are no longer available and the FOV has increased from ~110° to a more warped ~160°. However, we can now simply record in the recording selection: 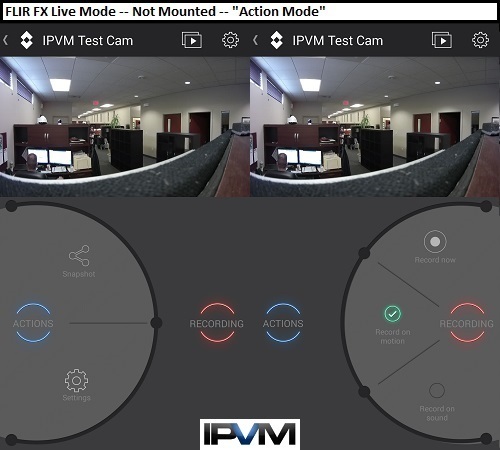 Manual recordings from the camera are sent to the SD card at 1080p resolution, and snapshots are 4MP. Below is a snapshot from our conference room scenes. The increased resolution is able to discern more of our subject and test chart in both day and night, but gain is also increased, resulting in the artifacts seen in both images. 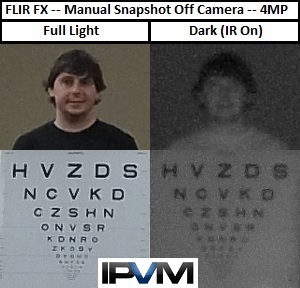 Directory Of Consumer Security Cameras on Aug 16, 2017
The consumer camera segment continues to grow, with new startups and models...
Ex-Googler Startup Camio Cloud Video Tested on Dec 16, 2015
Two ex-Googlers, one who was a Director of Product Management and another who...
Testing Smart Home PTZ (Remocam) on Dec 03, 2015
The consumer cloud video market is dominated by wide angle, fixed cameras...
FLIR Acquires DVTel on Nov 30, 2015
Originally a thermal imaging specialist, FLIR is making a major expansion...
FLIR Goes Consumer - Dropcam Killer? on Jan 07, 2014
Following one of the most surprising video deals in years (Flir acquiring...
Comments (11) : Subscribers only. Login. or Join.