US-based Uyghurs face threats and harassment from PRC authorities, according to a recently unclassified August 2021 FBI counterterrorism bulletin that IPVM obtained. The FBI warned such targeting violates US laws, yet continues “even as the US government (USG) has sanctioned Chinese officials." 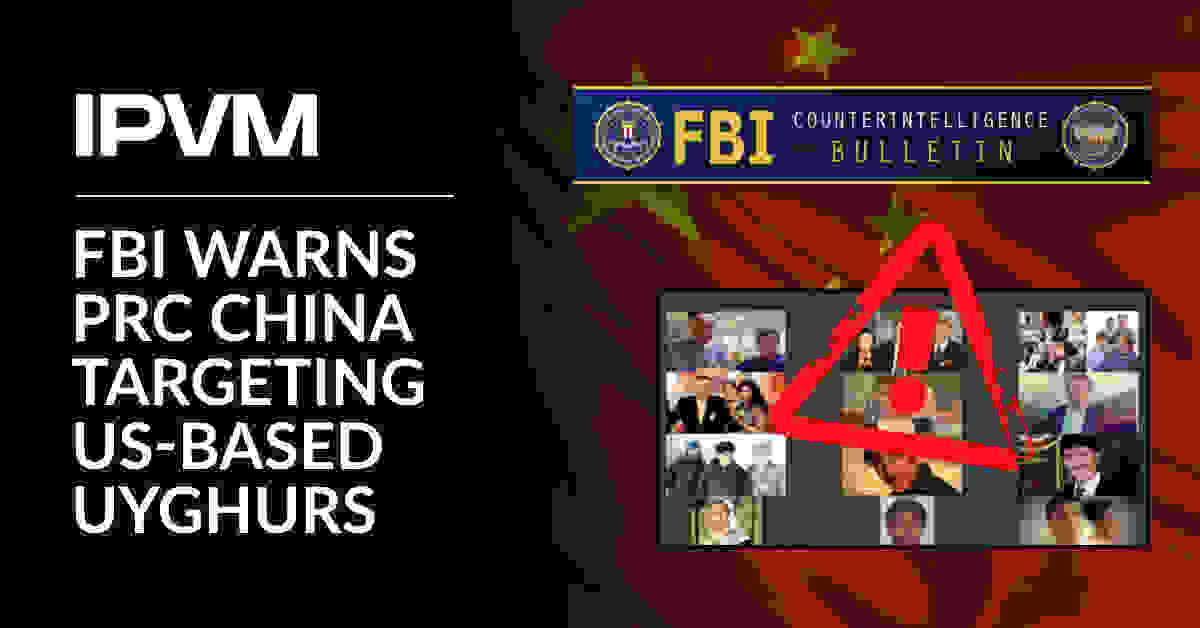 This shows growing interest by the US government to counteract the human rights abuses occurring, adding to surveillance manufacturers Dahua and Hikvision being sanctioned in October 2019.

IPVM has reported extensively on PRC manufacturers' use of surveillance technology to target Uyghurs in China. Moreover, IPVM reporting exposed how Hikvision and Dahua co-authored Uyghur targeting standards for the PRC government. Both companies made millions from security contracts in Xinjiang, where the FBI bulletin notes an estimated 1.8 million Uyghurs are detained:

Since 2017, Chinese authorities have detained more than 1.8 million Uyghurs in Chinese re-education camps where they are subjected to a variety of abuses, including arbitrary detention, torture, forced labor, forced sterilization, political indoctrination, sexual violence, and disappearance.

The FBI highlighted four instances of US-based individuals facing harassment, including a Uyghur-American's mother, aunt, and uncle being placed in a Chinese internment camp as a reprisal for his meeting with the US Secretary of State in 2019.

In another case, the FBI said Chinese officials attempted to stop a US-based Uyghur from publicly discussing the group's mistreatment through the WeChat texting app. This person's family was also imprisoned in China. Other tactics, according to the FBI, include:

The FBI encouraged law enforcement and the public to remain vigilant and report suspected abuses:

Members of the public are similarly encouraged to report suspected Chinese government-backed transnational repression activity of any kind to the FBI.

To report Chinese government-backed threats and harassment, contact your local FBI field office (details available at www.fbi.gov) or submit a tip via 1-800-CALL-FBI (or 1-800-225-5324) or via www.fbi.gov/tips. You can also make an anonymous tip to the FBI by phone or online.

The FBI's attention and warnings about these illegal activities show that the US government is ramping up efforts to counter this and that those working with such entities should be concerned about their participation.

That is certainly a nice way of saying killed.

Waiting for another Dahua/Hikvision integrator or manufacturer salesperson to claim this is IPVM exploiting the subject again... even though this article is based on a new FBI bulletin.

The comment I’m going to make here is that the FBI bulletin referenced does NOT directly mention any CCTV surveillance company.

Terrible and infuriating as this is, how is this relevant to video surveillance?

Only tangential as it is part of broader surveillance efforts. As IPVM expands, we will be covering more beyond core video surveillance. For example, we are wrapping up our first drone test to be released next week.

Ah, all right that makes sense to me.

The story focuses on an FBI bulletin detailing concerns over Hikvision and Dahua participating in writing Chinese police video surveillance standards, including tracking skin color and ethnicity. In addition, it reports how the regime has retaliated against U.S. based Uyghur's for attempting to expose them.

How is this not relevant to the video surveillance industry?

What bulletin are you referring to? The bulletin that is the focus of the story does not mention Hik or Dahua or anyone’s participation in writing police standards.

The IPVM story itself only has two sentences about it:

IPVM has reported extensively on PRC manufacturers' use of surveillance technology to target Uyghurs in China. Moreover, IPVM reporting exposed how Hikvision and Dahua co-authored Uyghur targeting standards for the PRC government.

I have no problem with the reporting and support it, but your characterization of the focus of the story is inaccurate, IMHO.

What bulletin are you referring to?

I know. Here I embedded it - just point out the parts about Hikua and writing the police standards. 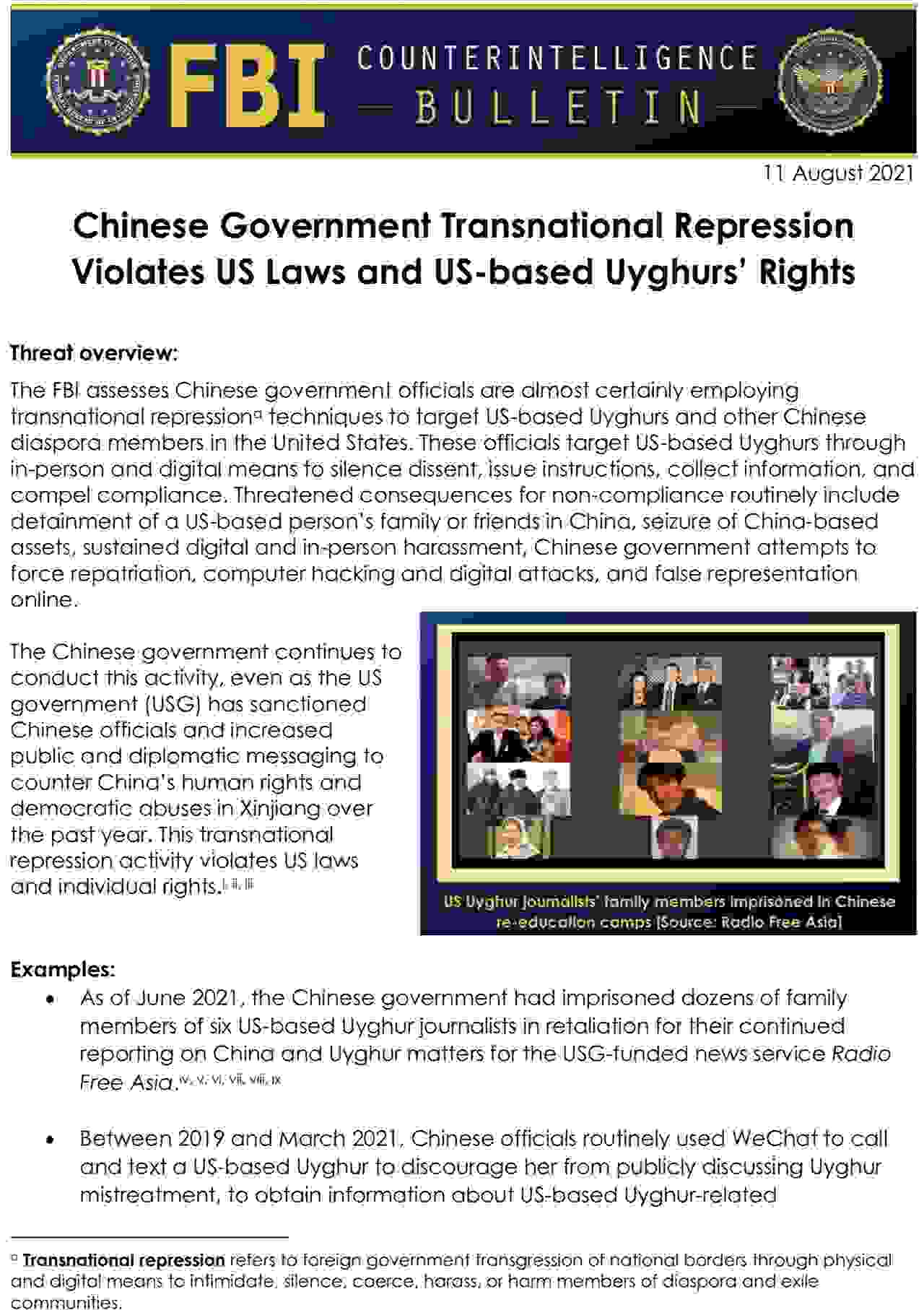 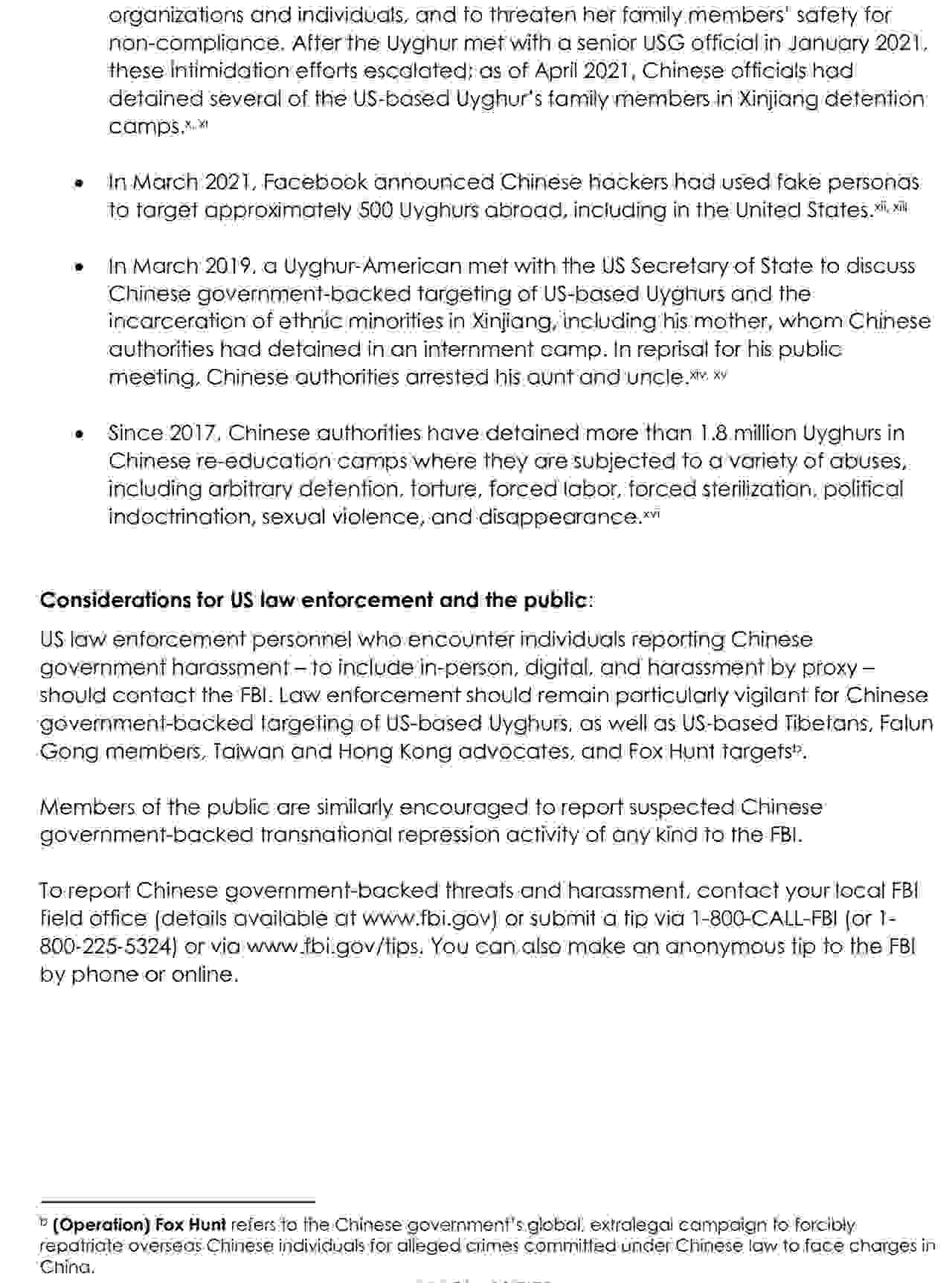 If you're not familiar with the link from Hikvision and Dahua to the PRC, you won't understand how this is related to video surveillance.

If you’re familiar with my posts, you’ll see I said nothing about it’s relevance to video surveillance, only that you were mischaracterizing the bulletin as being about things that weren’t even mentioned in it. And as I also posted, I support the reporting, as it’s important to raise awareness about China’s reprehensible actions.

I understand that you feel strongly about Hikua’s culpability in general, but there are enough damming things about them already that embellishments are unnecessary, and only serve to weaken credibility.

The FBI references specific source documents in the bulletin, which you coincidently omitted from your repost of the bulletin above, such as reports and congressional hearings to support the bulletin itself.

Additionally, there are many references to the Hikvision technology, 41.88% owned by the Peoples Republic of China:

"...video surveillance, facial recognition, and artificial intelligence to track every Uyghur's every move."

"This system includes thousands of surveillance cameras, including in mosques; facial recognition software; obligatory content-monitoring apps on smartphones and GPS devices on cars; widespread new police outposts with tens of thousands of newly-hired police, and even Party personnel embedded in people’s homes; and compulsory collection of vast biometric datasets on ethnic and religious minorities throughout the region, including DNA and blood samples, 3-D photos, iris scans, and voiceprints."

"The state published contract offers for artificial intelligence systems and facial recognition software to link data from ubiquitous security cameras with other data collected on citizens."

Just in case anyone forgot, your original statement that I objected to was

You really want to continue to insist that’s an accurate depiction, since you still have not shown anything in the bulletin or source documents regarding “Hikvision and Dahua participating in writing Chinese police video surveillance standards…”, which you claim the bulletin details.

Another approach would be for you to say “I made a mistake.”, which is no big deal.

I literally posted statements from the "Publicly-available source references" listed in page 3 of the bulletin... You know, the documents, reports and congressional hearings that the FBI referenced as part of the bulletin that is the feature of the news report by IPVM. 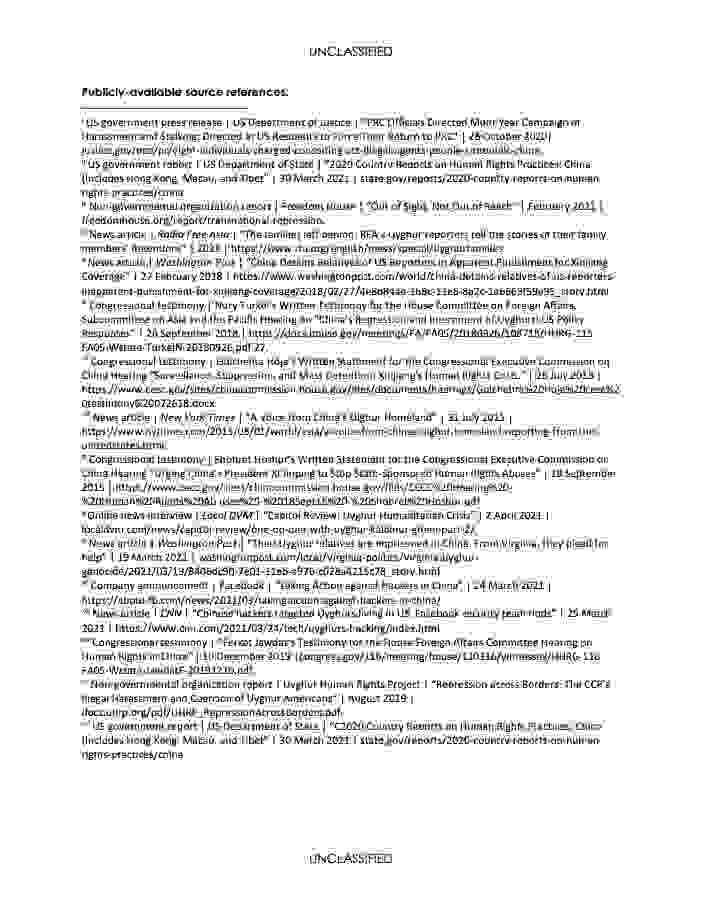 Again your statement was

Again I ask, is that what you think the bulletin is about?

No, just don't care. Worry about your people more and their people less.

Thank you for this report, even though it is a lot happier to just read a normal review of camera equipment.

I am writing this comment mainly to say I did not feel safe clicking this article's link to the FBI bulletin, it is just a cloudfront.net url with a lot of numbers and looks looks too much like a malicious link in some phishing email:

Even though ipvm.com published it and it is presumably vetted, considering its volatile subject matter I would feel a lot safer clicking it if the link url was based on the ipvm.com or fbi.gov domain or was otherwise more descriptive. I would not be surprised if the PRC's own version of the NSA were taking an interest in probing the weaknesses of your website.

To confirm those are our genuine URLs. I've asked our developers to implement a custom URL incorporating our domain name to eliminate any concerns about where the links are going to. Thanks.

" where the FBI bulletin notes an estimated 1.8 million Uyghurs are detained:"

Someone has to build the devices, right?

They can come here and feel different varieties of abuse from our government, just like the rest of us. Nothing like being abused by those you pay to protect you. Welcome to the country, friends.