This table shows the breakdown across manufacturers: 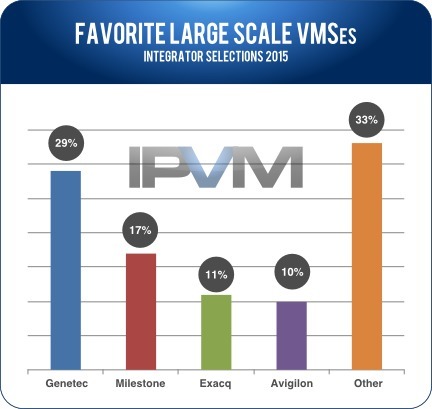 Genetec, who was not among the top choices for SMB, takes the top spot clearly. Their rival, Milestone comes in next, who was also second in the SMB race.

Third and fourth was close between Exacq and Avigilon. Relative to the SMB market, Exacq did worse for large systems, while Avigilon did modestly better.

Genetec, Milestone, Exacq and Avigilon were clearly the overall favorites with significant separation from the pack. However, 4 other manufacturers received notable consideration, with the next 4 combined getting ~14% of selections.

They are OnSSI, Pelco, Verint, Aimetis, NICE and DVTel. All of these companies had either negligible or no selections in the SMB results. However, all of these offering's features and pricing is more optimized for large systems than SMB.

Notably missing were DVR / NVR appliance manufacturers and especially Chinese low-cost recorders. Virtually no respondents suggested or recommended using such offerings, underscoring the importance of premium feature sets and the willingness for larger buyers to pay for them.

We believe the reason is the amount of training and time needed for staff to become strong at configuring and maintaining larger more complex VMSes with the advanced features that are frequently used.

Integrators emphasized Genetec's advanced integrations and functions for their section:

All of the VMSes selected by integrators here share most of the following differentiators generally not found in 'smaller' scale recorders:

Large Video Surveillance Systems Guide on Oct 29, 2015
This 14 page guide explains the key uses, design factors, and players in the...
Comments (27) : Subscribers only. Login. or Join.